Rally and rhetoric at WL People's Assembly but strategy needed 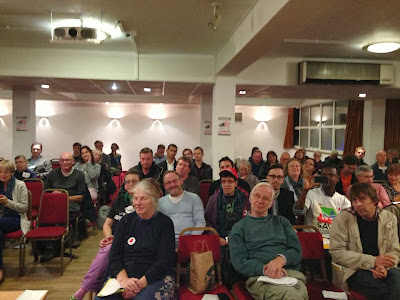 Last night's West London People's Assembly was certainly a lively affair with many passionate speeches but I was a little concerned when I saw the chair of the meeting and 5 speakers on the platform. There was some anxiety at the main People's Assembly at Central Hall that it would be more of a rally than an organising meeting. In the event it was a bit of both. I was concerned that this local assembly, covering Brent, Hammersmith  & Fulham and Ealing, would also be more of a rally, although surely that must be where we  analyse and prioritise  local issues and our strategy?

Although speakers were keen to say they would not just describe how awful things are it inevitably becomes the main theme topped off with rousing calls for action and unity. This certainly raises morale but doesn't get down to the nitty gritty. Advertising trains and coaches for the Tory Party demonstration on September 29th is important but what are the next steps in keeping our local A&Es open or fighting the privatisation of our schools? How relevant is it to organise across boroughs when local councils, even of the same political complexion, are dealing with the cuts in such different ways?

Next month there will be a founding meeting of the West London People's Assembly where its structure will be decided and officers elected and perhaps these issues will be discussed then.

As a common issue across the boroughs, and of course a national issues, the future of the NHS was prominent in the speeches and contributions as was the general theme of the poor being made to pay for the bankers' crisis, and the demonising of the poor by politicians and media in an effort to divide and rule. The focus on the real human stories behind austerity made us both more angry and more determined.

It was good that the Campaign Against Climate Change shared the platform with UK Uncut, hospital campaigners and trade unionists. Suzanne Jeffrey for CaCC made some telling points comparing  the economic and climate crises.

She said government and bankers knew the system was a sham but pretended there was no problem  or indeed that they were creating the problem, and when the crisis broke blamed it on over spending in the public sector and making the poor pay. Government and industry similarly pretended  there was no problem with climate change, denying their role in creating and increasing the problem, and then shifted the responsibility on to ordinary people and their life styles, or even worse on to people in developing countries.

Having just returned from the Green Party it was interesting to note that many of the solutions that Owen Jones proposed in his summing up are in fact Green Party policy.