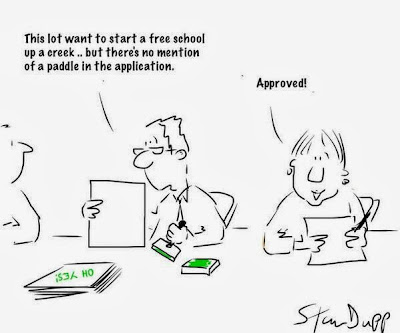 Following the Green Party Conference's  failure to approve a full review of its education policy, in consultation with teacher organisations, parents' groups and students, it appears that the Labour Party has also failed to grasp the full extent of Michael Gove's neoliberal revolution.


Although the nominal purpose of the session was to debate the two sections of the NPF report devoted to education no one spoke for or against anything in the report. It was a debate in name only. Had the speakers read the education section of the NPF report? Did they approve its contents? We will never know.

An innocent observer could be forgiven for wondering why the party that came to power saying that its three priorities were education, education and education could only find 36 minutes of its annual conference for the subject. Such an observer might also be forgiven for wondering how it was that all the Labour Party’s complex policy-making machinery could result in educational material for conference that passes no comment on the transformation of education under the Coalition. Schools have been removed from local authorities and made into “independent” units – often under the aegis of powerful private sponsors. Local Authorities are being progressively removed from the sphere of education and private operators play an increasing role, but none of this seems to figure in Labour’s concerns.

How is it that Labour can present policies on education which do not deal with these problem? The answer has to be that Labour does not think that such things are problems. Labour policy differs from that of the Tories/Coalition on matters of detail (which is not to deny the importance of some of those details) but on basic principles it would not be possible to get a cigarette paper between Tory and Labour Policy.

In opening, Peter Wheeler for the NEC said that Labour wants cooperation in order to produce the best education while the Tories favour division and competition. And yet the reality is that Labour and Conservatives believe that the way forward is to make schools into independent units competing for parental choice. He said that only Labour authorities were resisting Coalition policy. Sadly this is quite untrue. Some Conservative Councils have put up more resistance to Gove’s reforms than some Labour Councils.

Of the three union speakers two spoke about the importance of teaching assistants and the Coalition cuts forcing a reduction in their numbers. This is a good point but there is nothing in the NPF report about this. One speaker called for the abolition of tuition fees in FE/HE but this point was simply ignored as if it had never been said – such was the nature of the ‘debate’.

The prospective parliamentary candidates tried to raise enthusiasm with talk of Labour as the “Party of Aspiration”, denunciations of the Tories on childcare and rising child poverty, the demand for quality apprenticeships and the claim that the economy “must be powered by the many and not the few”. However, this was all speech making to move conference along and none of it had the slightest implication for the NPF report which was supposed to be under consideration.

Stephen Twigg replied to the preceding non-discussion. He talked of growing child poverty and Labour’s plan to provide child care as of right from 8.00 am to 6.00 pm. He denounced the use of unqualified teachers and claimed that Labour’s “mission” was to “place power and wealth in the hands of the many not the few”. This radical sounding statement (which has no reality in Labour policy) was immediately offset by an elitist discussion of opportunity. Success for Stephen Twigg seems to be measured by getting to a “top university” (a phrase he used three times in his eleven minutes on the podium). It seems not to have occurred to him that if a small minority of universities are designated as “top”, then by definition the great majority will not go to them. Someone should tell him that if you focus obsessively on “the best” you forget the rest.

For anyone following the dramatic changes to the educational landscape in England the whole debate would have had a strange air of unreality. None of the major political issues of the Gove revolution in our schools were even hinted at. For the moment Labour is still set on the educational course and the educational philosophy set by New Labour. It is a path to fragmentation and division in education. Its basis is in neo-liberal ideology and as far from a democratic and socialist perspective it is possible to be.
Posted by Martin Francis at 16:58:00