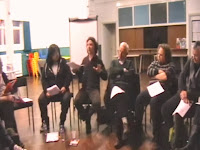 Several members of Brent Green Party attended the Make Willesden Green campaign's policy discussion on Saturday as observers. The participants were local activists and residents, mostly non-party but with some disillusioned Labour supporters, who were concerned about their lack of say in local issues, poor consultation, the loss of some key local amenities, and the feeling that Willesden Green was being changed into a featureless dormitory which would squeeze out poorer people.  The Council was seen as remote and unresponsive.

The meeting was highly positive and very participative and people left determined to exercise some People Power at the local elections in May 2014.

At the beginning of the well-attended  meeting Alex explained the relationship between MWG and the Greens. MWG is standing on an independent platform and is not a political party and welcomes support from supporters of all parties and none. The 'Green' in Make Willesden Green stands for the place and not the party.

However, the Brent Green Party believe that an independent grassroots councillor for Willesden Green would enhance local democracy and has issued the  following statement:

Brent Green Party welcomes the candidature of Alex Colas who is standing as an independent on the Make Willesden Green platform in Willesden Green ward in the local elections.

We believe that the election of Alex Colas, arising from his principled participation in local campaigns, would be healthy for local democracy.  In recognition of this we will stand only two candidates in the ward and recommend that our supporters give Alex their third vote.

Congratulations to Brent Green Party on a very principled and sensible decision, and good luck to Alex and his supporters in the Willesden Green area in the local elections in May.
Philip Grant (non-party political, but doing what I can independently to promote more accountable local government in Brent)