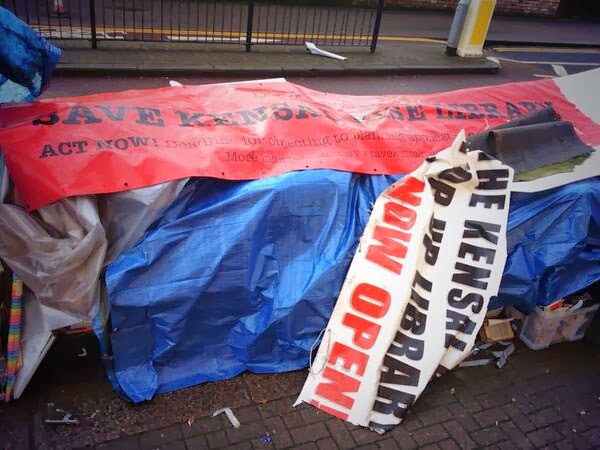 There is consternation in Kensal Rise this morning following the destruction of the Kensal Rise  pop up library before dawn by security agents hired by Cluttons, the property agents for All Souls College, owners of the library.

The library was unceremoniously torn down and its books dumped.

The pop up library has been on the site since Labour Brent Council closed the library in its 'library transformation' project. Campaigners have bee pressing for a community library space in the proposed new development by developer Andrew Gillick.

Gillick is due to submit new plans  but the investigation into fraudulent emails submitted to the Council about his previous planning application have not yet resulted in any action despite frequent reminders from local residents to the council and the City Police.. Emails in favour of his planning application were submitted from an address that allegedly  he owned and sublet to tenants.

The action has followed quickly on the Friends of Kensal Rise Library's statement yesterday that they would be unable to support Gillick's revised planning application:

Following refusal of planning permission last September, the developer and his architect are submitting fresh proposals for the library building to the planning committee of the council. Negotiations with regard to the space reserved for the community have been on going since before Christmas in so far as we have been shown and have commented on preliminary drawings. According to the architect these were a 'work in progress'.

The Trustees of the Friends of Kensal Rise Library voted to agree, in principle, to accept the offer of two thirds of the ground floor, contingent on seeing the final drawings and the developer's planning application and also subject to an agreement being drawn up that would give an assurance that the Friends would be the tenants of the space in which to run a community library. We have also had the support of the Brent Council Lead Member for Libraries, Cllr Mashari, for this.

Both the College and the Friends contributed to an agreement document that was to accompany the planning application. However, this was not agreed by the developer.


The Friends do not regard it as appropriate to approve a planning application on behalf of the community without first seeing that planning application. Furthermore, they have so far not had an assurance from the developer that in return for their support their tenancy of the library space would be assured.

We have informed both the College and the developer that we have been unable to support a planning application in this way.

Is this the consequence? 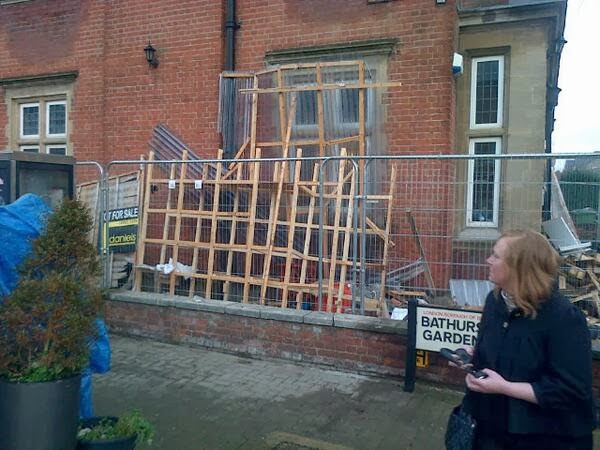 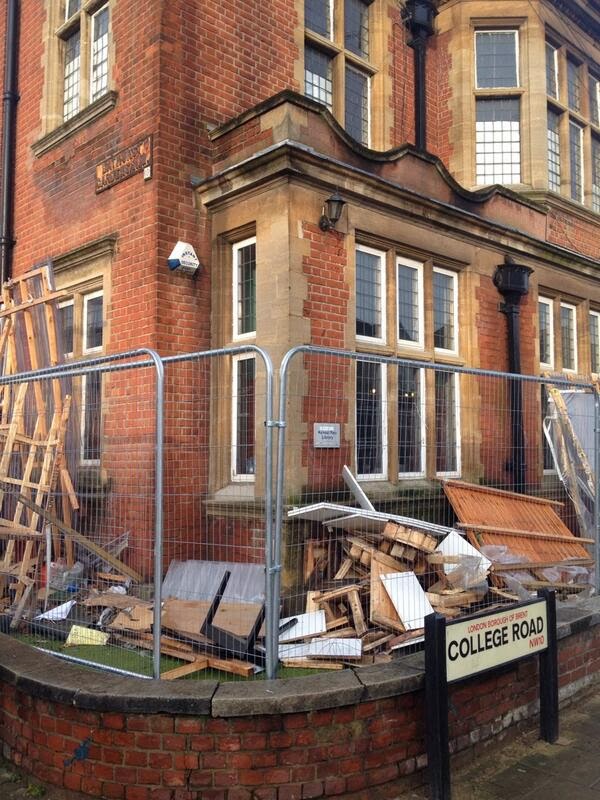 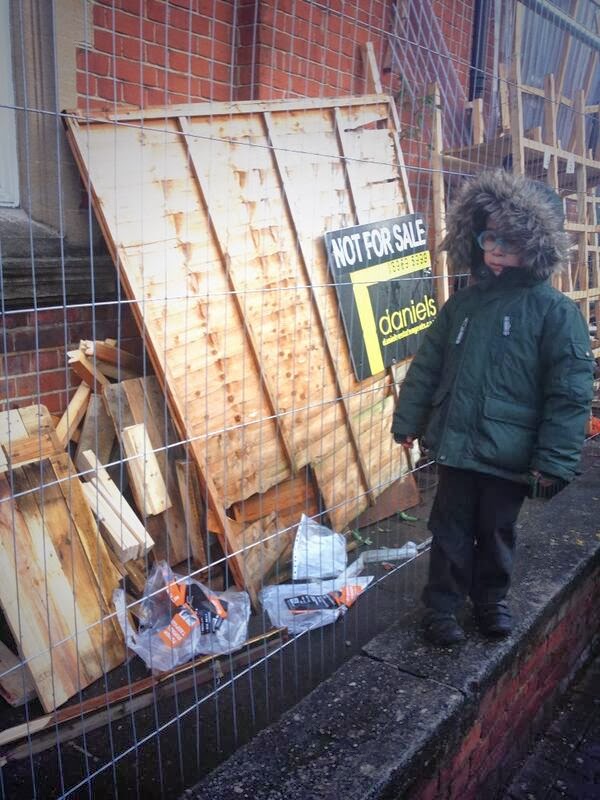 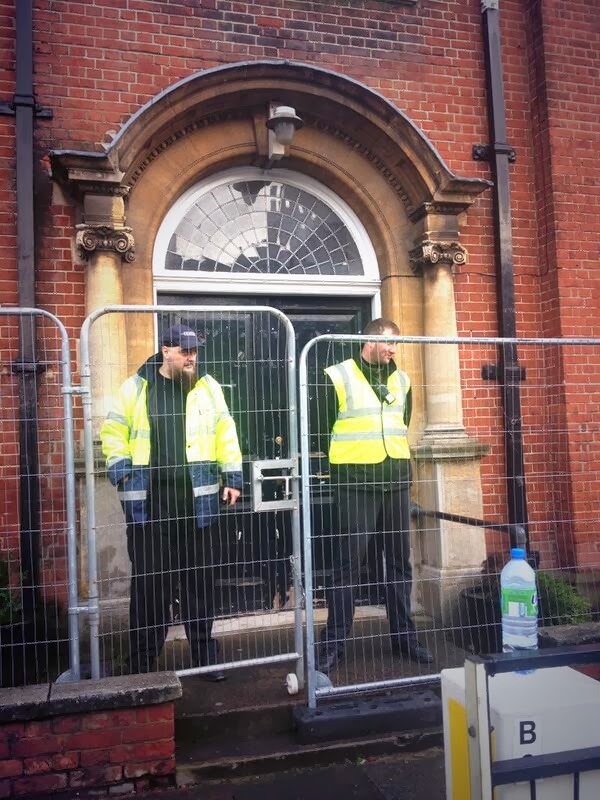 Campaigners had taken their case all the way to All Souls College in Oxfo0rd only to see the college engaged in the:shameful action of destroying a community library and its books. 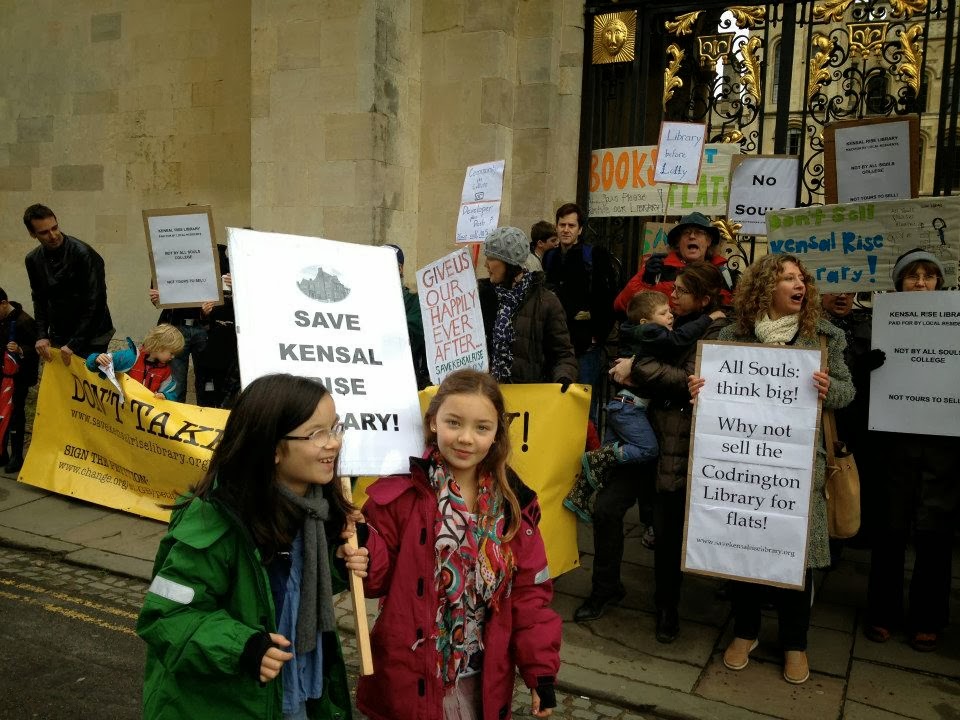 Beyond irony! Remember the infamous 3am raid of 29 May 2012 in which officers, sent by Brent Council, stripped this fine Victorian building of its books and Mark Twain commemorative plaque? Now, it seems, All Souls College, Oxford, has taken a leaf out of the council's shameful - and shameless - book of tactics and sent in the heavies to rip up the much-loved, well-used volunteer library. What a shambles! How ill-informed! All Souls has done itself no favours by this act of vandalism.

What will the warden, Sir John Vickers, have to say?

Here's a picture of books dumped on the pavement

I guess libraries and books are only for the Oxbridge elite

All Souls claim they are taking vacant possession and that Brent Council instructed that they remove the "illegal structure" so they've moved the books off the building premises onto the pavement with the other books.

Hmmm ... Universities are not about culture or education, they are about money. Any smart media people out there with ideas about how we can spread the word about the despicable policies of the Council and the University ? We do not need more flats, we need community space in an area where the Council is only present when collecting money, and where investment and services are put elsewhere in the Borough to little or no benefit of us in this area.

A shame on All Souls College. Call this 1st-class education? What kind of message does it send out to youngsters.

Anyone from Kensal Rise fancy a coach trip up to All Souls? We could pay a visit to the Codrington library and hurl some books out of the windows.

How can All Souls even consider giving 'vacant possession' to a developer aspects of whose previous planning application are currently in the hands of the City of London police National Fraud and Investigation Bureau?

The thugs of Brent are still hard at work I see.
It is not unusual for the council to behave in this way.

Presumably they will send out it's waste collection people to remove the books and refuse tonight.

what a bunch of wankers

So sad. What a legacy to our children.

I hope one day the security people who work for these thugs will come to their senses and revolt against them and simply refuse to take down Campaigning Residents protests.

The local residents should engage with the "Owners" and make a serious offer to buy the library.

I would put some money towards it.

Their should be enough comfortable people out in the world who would help us buy it.

I am a dyed in the wool socialist and a signatory to your hard fought campaign to save this community project, I find it hard to believe that a Labour council would take these steps, can you please supply me with the council leaders name and E mail address please, so that I can try to understand this sad decision to go against their electorate !!

I walked past last night and saw them emptying the furniture. I couldn't see a number to call from the campaign, and asked if they were moving the shelves from inside, they said no, and they only had the one van it seemed. quick work of destruction.disgusting

It's Game Over on the library I fear. We can fight on but the battle is futile. Not one of the 6 libraries has been reinstated. I am moving on with my life. Some battles are not worth losing your mind over.

Capitalism at it's best.

Throwing out the unwanted so those with money can move in.

Let us have some accountability from those who are elected by the people.

Recent proposed changes and changes that have become law are making it more difficult to protest against the establishment.

The end result is a more unequal society with community property being taken over and becoming private property controlled by those who can outbid everyone else.

Perhaps this is what is meant by "Big SOCIETY."

So, who do we NOT vote for in the next election? How do we stop this?

Sadly all the main parties are as bad as each other, greed has taken hold

I fear we are now in similar circumstances to both great wars.

The Bursar of All Souls has administrated the sale of our Library: http://www.all-souls.ox.ac.uk/people.php?personid=61 and http://www.iiss.org/en/persons/iiss-s-governance-s-and-s-advisory-s-structure/thomas-s-seaman with the assistance of Richard Tufnell, Asset/Portfolio Manager at Cluttons: http://www.cluttons.com/people/richard-tufnell Developer is Andrew Gillick of Kensal Propoerties Ltd. Cricklewood Library Ltd. Platinum Revolver Ltd. and more: http://www.ccdni.com/director-andrew-gillick and http://www.companiesintheuk.co.uk/director/3946989/andrew-gillick

Is there no Justice or Honour in this world anymore? Clem Attlee would be turning in his Grave.

The property is privately owned and the owners are perfectly entitled to kick these squatters off the land and throw their junk in the bin. I don't want to pay my entire pay packet in tax and so guess what there has to be cuts in services. Cant say i am missing the library or the pop up, but then again drinking Super Brew at breakfast time is not my thing....

IF THIS MAKES YOU ANGRY WRITE TO ALL SOUL'S BOSS, Sir JOHN VICKERS at: john.vickers@all-souls.ox.ac.uk
1.Why didn't he post a notice up on the Pop-Up or in the local press, warning residents to dismantle or face the consequences?
2. Why did he smash up the half of the Pop-Up which did not not stand on College land and then dump our books on the roadside in the rain?
3. Why is he disingenuously blaming the Council, when its Enforcement Department had no intention of demolishing the community's Pop-Up Library. Ward Councillors from all three main political parties visited and supported the Pop-Up, while Cllr Roxanne Mashari (Lead on Libraries) and Cllr James Denselowcame to see the damage for herself, after distressed residents alerted her. I shall miss my shifts at the Pop-Up and all the events that took place there, like the children's storytelling, poetry and book readings,the carol singing and those spontaneous cabarets with the City Piano.

Hey Dyed In The Wool Socialist! It's not the Council: it's All Souls College and their partner the developer,Andrew Gillick. Email the Warden, Sir John Vickers john.vickers@all-souls.ox.ac.uk and tell him what you think! He's blaming the Council when they had no intention of destroying the Pop-Up. Usual College tactics to blame everyone else for their cynical, abusive behaviour. The College is in danger of being perceived as a disreputable institution.

But our Labour Council caused this in the first place by closing our libraries
Funny how people forget this.

In Africa they have a saying, "An old person dying is like a library burning down". In this case, "A library torn asunder is a loss to al" including, and especially, the ignoramus's who did this sad and treacherous deed. Infidels and gobdaws!

The library campaigners should stand their own candidate - you have been abused by the main parties for too long and you need to make a stand. I believe that residents in Willesden Green are doing this and the more others that do so the better.

In the coming Local Elections, European Elections and 2015 elections we are Young to Witness a dramatic chance with fringe parties holding the Balance of power.

We have witnessed in Greece, Spain and Italy the people being ...... All Over. UK the same thing is happening with those with money buying community assets from underneath everyone.

The major parties do not now represent the interests of the people.

Voting against major parties is the only way.