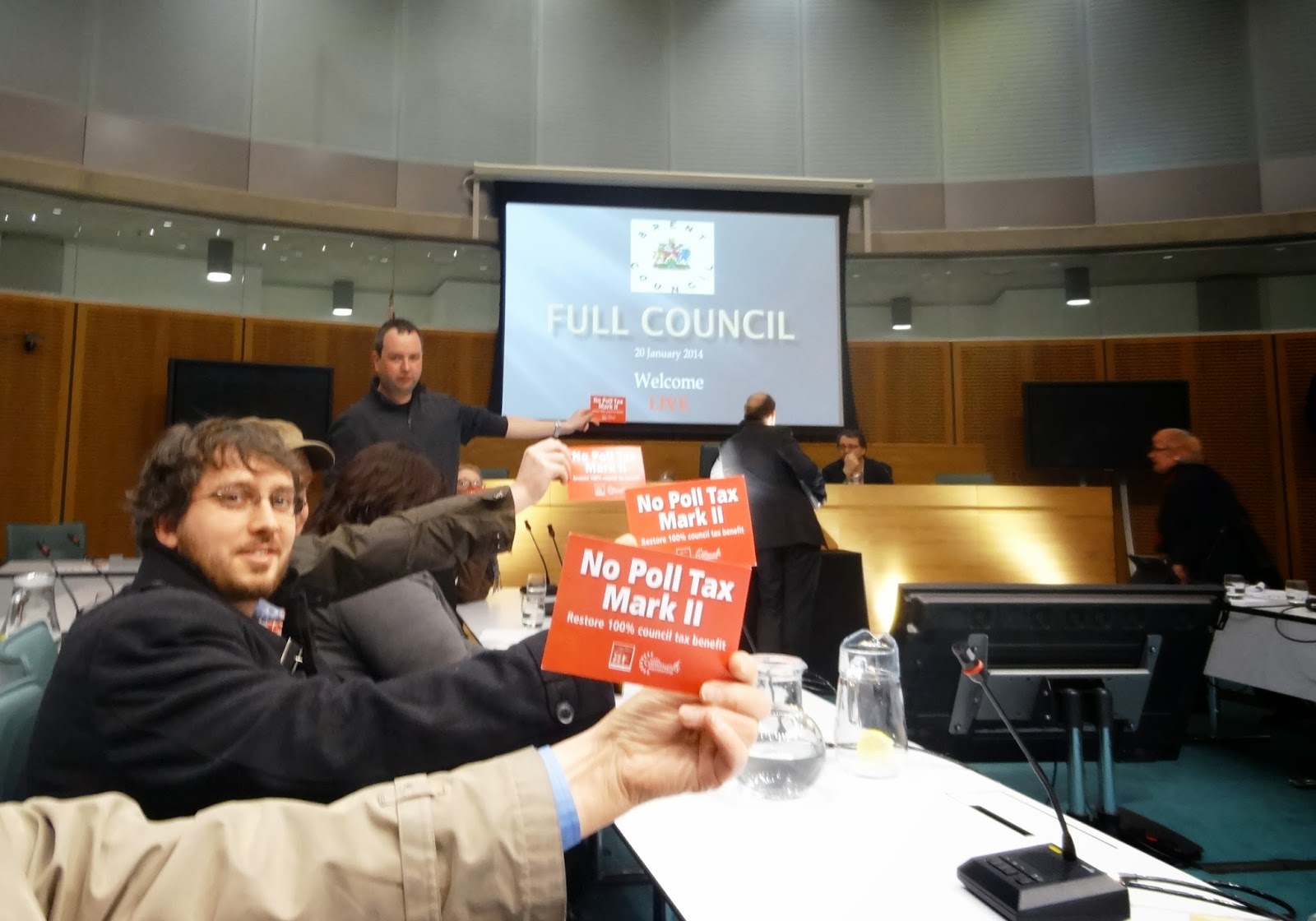 Demonstrators took over the Grand Hall at Brent Civic Centre tonight for an impromptu 'People's Assembly' after the Mayor, Bobby Thomas, adjourned the full Council meeting to another room. 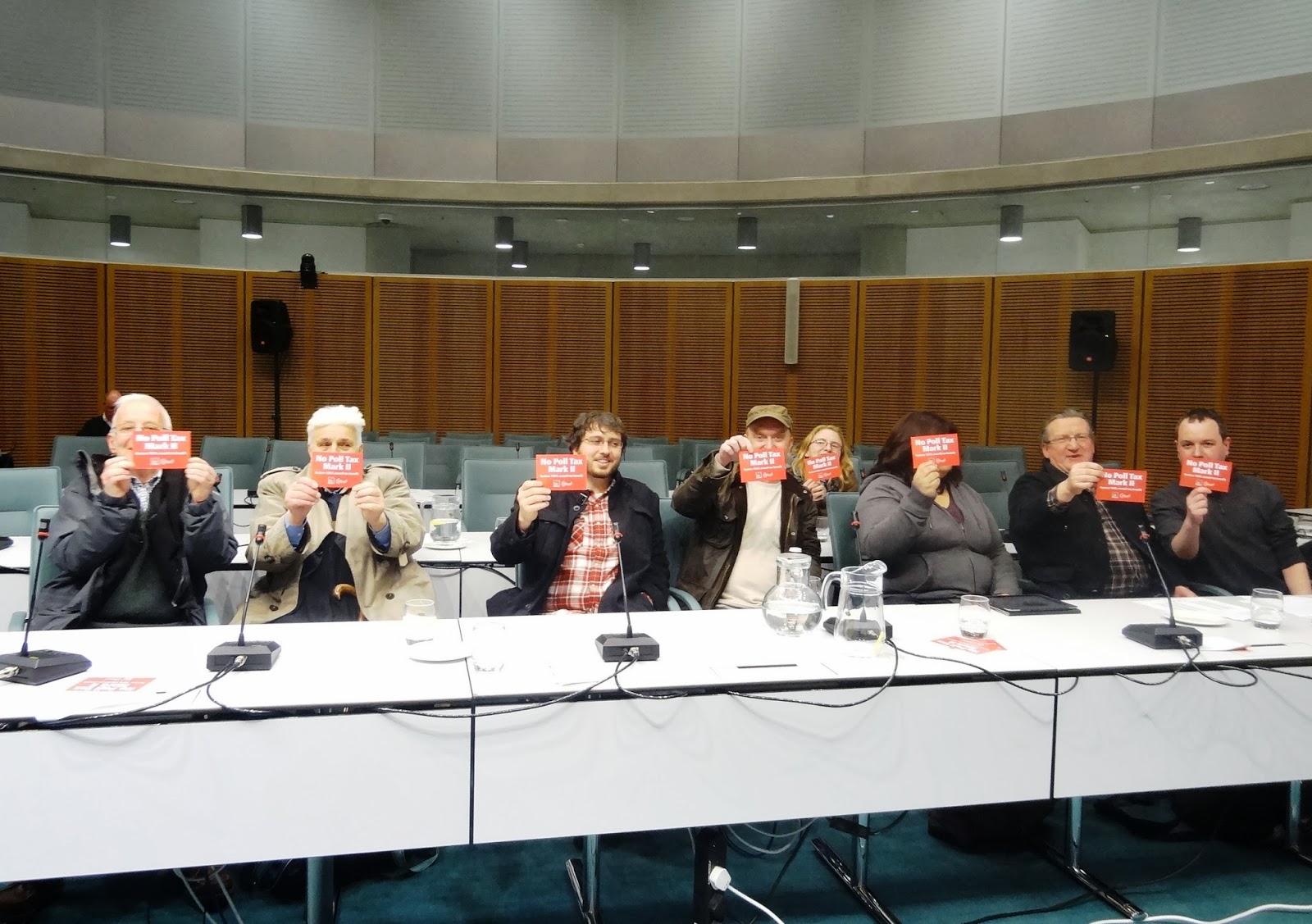 The adjournment took place as a result of disruption when angry campaigners protested at the failure of the Council to allow discussion of the Council Tax Support scheme which this year resulted in more than 3,000 poor people being summonsed by the Council for non-payment of Council Tax bills. Many had to pay court costs on top of the tax they owed.

Campaigners from Brent Housing Action had asked to speak at the meeting about their concerns but were refused by Democratic Services on the grounds that there was 'no provision' for speakers in the Council Constitution, When they discovered that speaking rights could be granted if the three Council party leaders agreed, they wrote to all three, but the Conservative leader reported that Council, officers said that this could only be done well in advance as it had to appear on the meeting agenda.  A last ditch appeal to Muhammed Butt to move suspension of  Standing Orders so that a speaker could be heard was turned down.

When  the Council Tax Support Scheme was reached on the agenda, Liberal Democrat leader, Paul Lorber moved suspension of Standing Orders so that the item could be discussed fully. His request was refused by the Mayor, Bobby Thomas, but eventually he was forced to put it to the vote. The Labour group voted it down but the public gallery showed their view by voting, tongue in cheek, for the suspension.

An exchange then took place between former Labour Councillor Graham Durham and the Mayor in which Durham accused Thomas of reneging on a promise made at a Trades Council Meeting to give campaigners against cuts a voice.

Thomas ordered the self-employed security guards to remove Graham Durham and during the confusion Robin Sivapalan stood in front of the councillors and made a speech about how having to pay Council Tax was causing suffering for Brent's poorest residents already hit by benefit cuts and the hosing benefit cap.

Sivalapan was then man-handled out of the room by the security guards with Graham Durham remaining in his seat. The live feed had been turned off by this point and after hurried consultation Mayor Thomas announced that the meeting was going to reassemble in another room and that the public would not be admitted.

Demonstrators tried to gain entry, expressing the view that the public had a right in the interests of democratic transparency to see Council business being done. Security would not let them enter although at least one of the press was allowed through.

As councillors left the Grand Hall, a red faced Executive member, Cllr Jim Moher, in front of shocked public, launched a tirade against a burly security guard telling him 'it's your fault' for not removing Graham Durham when instructed. 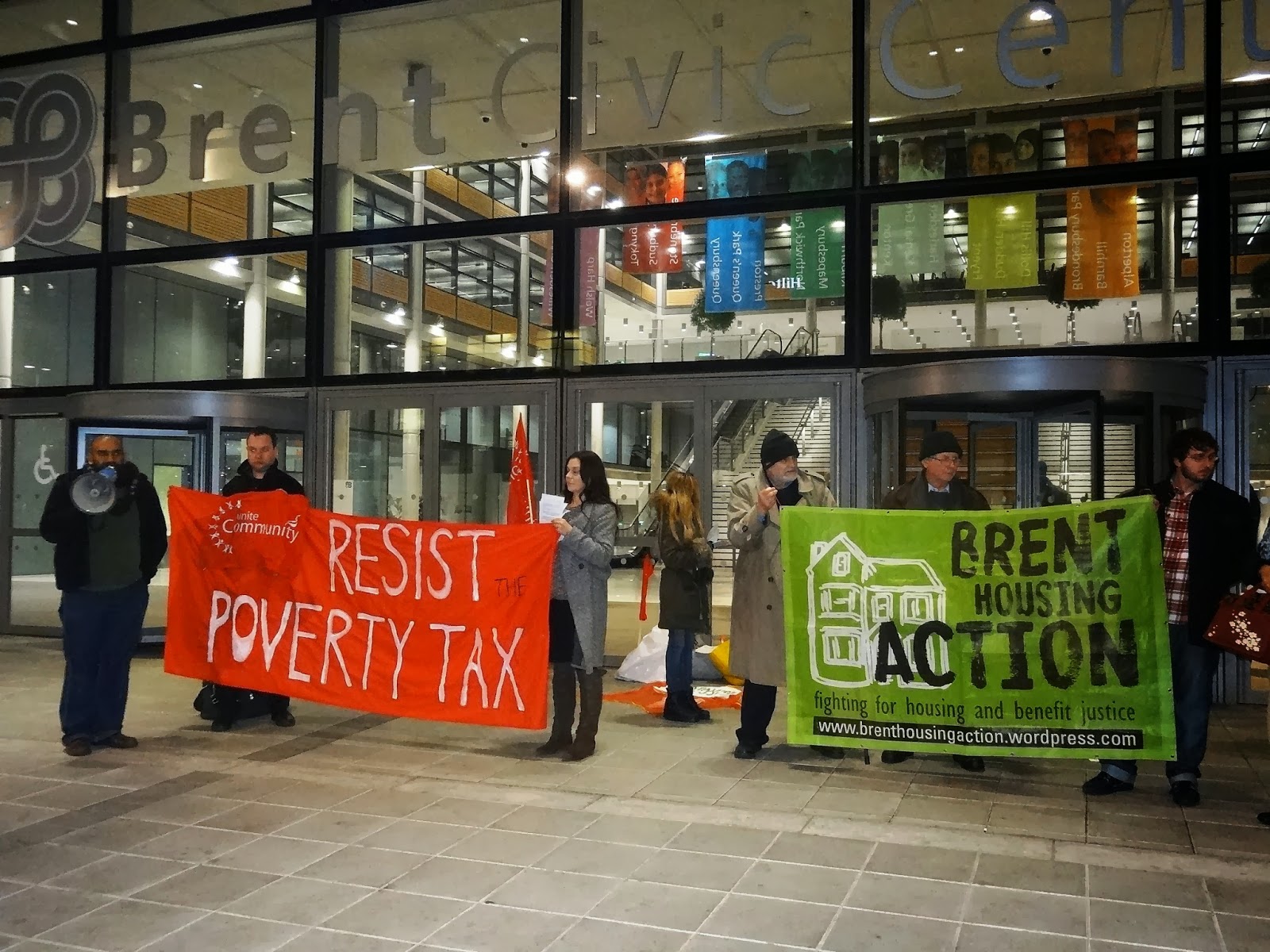 The evening had begun with a peaceful demonstration outside the Civic Centre and if the Labour Group had sensibly allowed the public a chance to speak for 5 minutes all the disruption could have been avoided.

Ironically the Conservative group had tabled a motion which pointed out that unemployed and disabled people in Brent were being asked to pay £5 a week in Council Tax from their JSA/ESA of £71.70 a week and that the figure is the second highest in London. Their motion called on Brent council to 'reduce these charges on its poorest residents' but went on to say that this should be done by eliminating waste and identifying 'alternative financial savings'.

After a discussion in the Grand Hall, which continued even when officers turned off microphones and lights, the campaigners left peacefully escorted by security.
Posted by Martin Francis at 22:51:00

Sorry I missed it. Well done all

Disgusting behaviour! According to the Kilburn Times account, councillors 'fled for cover'. What sort of example is that to set the younger generation? We should be able to count on a little more steel in our representatives............

How very mature of Brent Housing Action to start shouting people down and being completely disruptive to proceedings - i'm embarrassed for them all. OK, you can't speak at the meeting when you think you should be able to, but there's other ways of getting your message across rather than resorting to anti-social behaviour. I'd raise their council tax on the basis that they acted like a bunch of idiots.

Quite. Should've written to their council about it.

It hurts to pay council tax yet we still have to pay it.

They responded to the consultation (60% of those that responded agreed with their view), they lobbied councillors, they requested their constitutional right to speak. I'mreally interested to know what other ways of getting their point across you would suggest?

If they responded to consultation and lobbied councillors then i'd suggest they already did get their point across. You generally don't get your way when you start shouting people down and causing chaos which results in a meeting (at which other key topics need to be discussed, by the way) being terminated/ re-located.