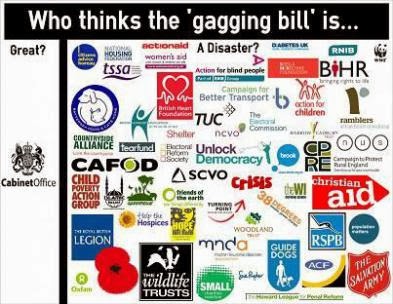 Last night the Lobbying Bill passed the House of Lords.One of the votes was tied 245/245 but that procedurally means the government won.

What this means is that the Liberal Democrats have helped pass another illiberal bill (one that they no doubt hope will limit the impact of students who were greatly betrayed by them). Now are we going to see the government take the Royal British Legion, Oxfam or another NGO to Court if any organisation challenges this? Meanwhile the real danger to politics, the corporate lobbyists, will remain largely unaffected.

As Home Affairs spokesperson for the Green Party,  Peter Cranie issued this response:


The coalition has tried to legally gag those who would challenge their appalling record on poverty, the environment, tuition fees and civil liberties. The Green Party will voice those concerns and we urge former Liberal Democrat voters to help us kick out the legs from under the coalition at the European Elections, by voting Green and making completely clear this attempt to end freedom of political speech for charities and campaigning groups was a step too far.

1. Organised support for civil disobedience required on this. Who the hell do they think they are?
2. A golden opportunity for Milliband to produce a reason to vote Labour, by making a cast-iron promise to repeal this the day after achieving office (and he must resist the weasels in his own party who will be telling him what a useful little weapon it will be for him at the following election).

Typical Lib Dems - the stand for nothing party