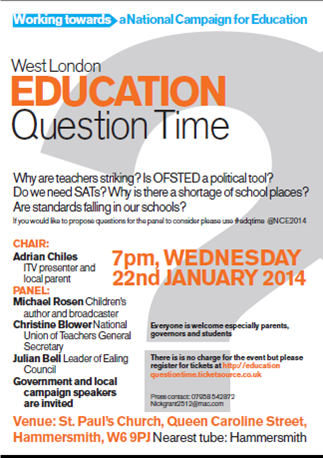 I have long argued on this blog that because of the broad and fundamental attack on education by Michael Gove and the Coalition that we need a national campaign which both exposes that policy and proposes an alternative.

I hope that the Green Party will be part of the campaign given that we have progressive policies on education which I hope will be strengthened at Spring Conference.

Towards a National Campaign for Education has been formed to promote such a campaign and they have organised a meeting on January 22nd to which they invited the London Green Party. I will be attending and I hope other Greens will come too.

The Campaign has its aims on its blog: LINK:


This blog is aimed at anyone who uses, works or is just interested in our education system. It has two main purposes.

The first is to expose the faultlines in the 'neo-liberal' education reform movement and in particular to target the weaknesses, errors and political ideology in Gove's education policies.

The second is to develop a discussion that hopefully leads towards building a National Campaign for Education. There are many excellent education campaigns in the UK (see our Links page). There are also several different unions representing teachers and support staff. There are governor and parent organisations and a raft of specialist organisations dealing with subjects or specific areas such as SEN. This creates a complex network of organisations and individuals. The danger is that their work is duplicated and their impact is dissipated.

For some time now, people have been arguing that we need a National Campaign for Education (NCE). The NUT and UNISON unions have conference policy calling for the creation of such a campaign. At its last National Steering Committee the Anti Academies Alliance agreed to work towards creating an NCE by engaging in wider discussion and debate, hence this blog.

The argument is fairly simple. Gove's attacks on education cover almost every aspect of education. It is not just about academies and free schools. It reaches in to the curriculum, pedagogy and assessment. It also affects the provision of school places and teacher education. It is about when and why our children are educated. On all these issues, the Coalition government have launched an all out attack. The breadth of their attacks require a coordinated and sustained response.

This blog is not about replacing other campaigns. But it will argue more 'synchronicity' between different campaigns. Together we can build a campaign that halts the attacks and outlines the sort of education system that provides a good local school for every child.