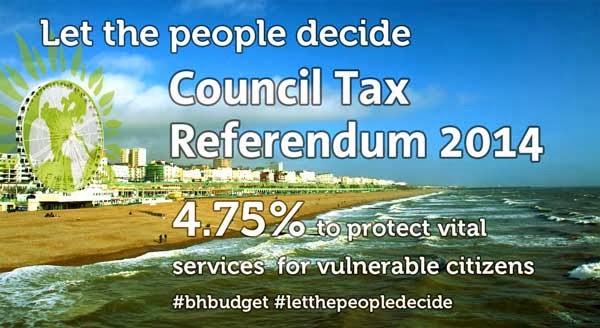 Brighton Greens have decided to call the Coalition's bluff and hold a referendum on raising council tax to protect adult social care in the city. The controversial move will also put Labour on the spot and is likely to lead to debate amongst anti-cuts activists between those who see the priority as saving services and those who see the rise as yet another burden on a population who have seen a cut in benefits, rises in prices and rents and a reduction in wages in real terms.

The decision to let the people decide is a radical move and whichever way the vote goes will bring the debate about the impact of the Coalition's cuts to local authority funding right out into the open.

The decision to hold the referendum has been backed  by all Brighton's Green councillors, by Caroline Lucas MP, Keith Taylor MEP  for the south East, and party leader Natalie Bennett.

This is the statement on the Brighton and Hove Green Party website:

The UK's only Green council administration – in Brighton and Hove – is proposing a referendum of local people on a council tax rise to protect services for the city's most vulnerable.

As a response to central Government cuts, the minority Green administration has been working to find ways of funding local services threatened by coalition cuts, including care for the elderly.

It is asking people to consider a Council Tax increase of 4.75%, which would be used directly to fund adult social care services, including care for the elderly, and grants to third sector organisations. Residents would be asked to vote on the possible increase in a referendum - the first of its kind in the modern era.

It comes as Eric Pickles, for the coalition government, is paving the way to restrict councils to a rise of 1.5% or less, on top of draconian cuts already announced. Three quarters of county councils and a third of other councils have already indicated that they plan to increase council tax to meet growing need and mitigate the worst of Westminster's cuts.


The Coalition’s cuts mean we cannot deliver the services we were elected to provide and which our consciences say we should provide. We have no choice but to seek the views of local people on funding these services through a tax increase.

Westminster's ideologically driven cuts to local councils are huge and relentless while demand for our services continues to grow. Vulnerable people who depend on our services are being threatened from Westminster like never before.

We have so far been successful in saving tens of millions of pounds but we can no longer find enough efficiencies to absorb all the cuts. Without today's proposal, I fear for the serious impacts on the most vulnerable in our city from the Coalition's cuts.


This is a bold move and one that I know the Council is taking very reluctantly. The people have not voted for austerity. They have not chosen to have services they rely on destroyed by draconian cuts.

This is an appalling situation, for which the Coalition Government is alone to blame. A referendum would allow the people of Brighton and Hove, including my constituents in Brighton Pavilion, to decide on the best response

Natalie Bennett, the leader of the Green Party, said:

As Greens we believe that decisions should be made closest to the people who are affected. Instead of letting Whitehall impose cuts on vulnerable people in Brighton & Hove, this announcement takes the decision to the people.

It reflects Green principles being campaigned for around the country. Our Oxfordshire county councillors, in opposition, last year made a bid for a 3.5% rise to protect social care, and I know other local parties will be putting forward similar proposals this year.

Across the south east we're seeing councils cut to the bone and all too often it is the most vulnerable who suffer. This announcement gives the people of Brighton & Hove a chance to decide for themselves what they want and to consider the best way to protect the vulnerable in the city from vicious Tory cuts.

The proposal for Brighton & Hove will pass in Council, in February, unless opposed by both Labour and Tory councillors. It would then proceed to a ballot on 22nd May - the same time as elections for European Parliament, which would significantly save on administration costs.

The other parties, especially Labour, will need to decide whether they trust the people of Brighton and Hove to make this decision. The Green administration I lead did not seek an election mandate to raise taxes in this way and in previous years I have opposed going down this route. But the unprecedented pressure on our budget from Westminster can no longer be absorbed, so we are seeking a democratic opinion from local residents - those who pay council tax and those who rely on the services it funds.

Westminster is threatening services for the elderly, who have worked hard all their lives and deserve our support in their old age — not reductions in the services which are often a lifeline for them. The city’s charities, social enterprises and not-for-profit organisations provide essential services across our city’s communities. We must be able to support them.

Current calculations show that a 4.75% increase means a rise for a Band C property by £5.30 a month and for a Band D property by £5.97. Those claiming Council Tax Reduction will still be protected by the existing scheme.

This is an increase of less than £6 a month for the average household and nothing for those on low incomes who claim under our extensive Council Tax Reduction scheme. We know many Brighton and Hove residents are hard-pressed but we hope they will see this level of increase – equal to less than half a pint of beer a week - a reasonable price to pay for maintaining key services.

The storm clouds ahead for next year’s very severe financial picture mean we need to act now. We are of course continuing to work on saving money through reviewing fees, generating new business and selling off spare buildings. But that won’t be enough in the next two years to protect the city’s elderly and vulnerable from Osborne’s austerity agenda. Fortunately the upcoming European elections mean we can hold this major consultation with our residents for less than it would have otherwise cost.

Key elements of these revised council tax budget proposals, which will be published in full for the Policy & Resources Committee meeting of 13th February, include: