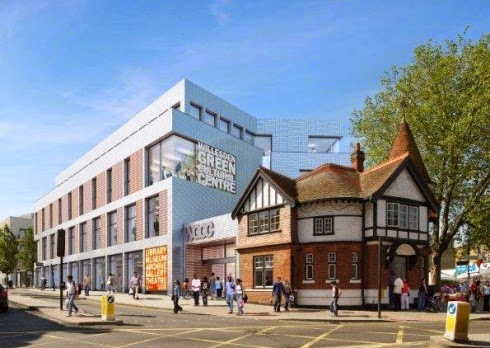 A Brent Council officer told a recent meeting of the Willesden Green Town Meeting that there would be no One Stop Shop at the new Willesden Cultural Centre.  Instead the Council would be looking for a commercial tenant for the space.

This follows the Council's decision to let two floors of the Civic Centre to Air Francis and squeeze Brent staff into the remaining space.

During the controversial planning application process for the WG Cultural Centre the Council made great play of the benefit to the community that would accrue from the development of unafffordable private flats (later sold on the Singapore market). The developement would finance the Cultural Centre and the One Stop Shop, along with council offices to serve the local area and this  out-weighed the loss of the old library, car park and open space according to  ex Executive member Cllr George Crane, then lead member for Regeneration and Major Projects.

This is an extract from Andy Donald's (Director Regeneneration and Major Projects) report:


4.6 The Council is currently driven by the overarching concept of One Council. This aims to provide excellent public services and deliver these in the most efficient way but also to build strong relationships and better communications between the Council and citizens ensuring local priorities are addressed and that local potential is nurtured. A redeveloped WGLC will play an important role in this strategy supporting both the One Council Library Transformation Project and the One Council Future Customer Service Project.

4.8 The Future Customer Service Project aims to improve efficiency and clarity of the services offered to citizens. The strategy is dependent on developing a new customer contact centre at WGLC providing a service for the south of the borough, an area where many of the Council‟s high need customers reside.

The Council appeared to have been driven, through the Council's budget crisis caused by Coalition cuts, to reneage on its promises to local people, especially those who formed the Keep Willesden Green campaign.

Residents were angry and asked if the Council intended to put these changes to what was supposed to be a local amenity to further consultation.

I understand that Andy Donald has replied that no decision on customer services at the Cultural Centre has been made but 'the Council’s cabinet will be considering a report in October in respect of the overall approach to customer access for the Council as a whole, which will then inform the shape of the customer access offer at the Civic Centre and Willesden going forward.'

He has promised that residents will be informed about any proposals as part of the dialogue over the use of the  new building.

Clearly an issue that residents will be monitoring.

Meanwhile someone who lives on the front line of the development told me earlier this week that a construction worker on site had told her that the open space between the flats and the Cultural Centre, offered in compensation for the lost open space in front of the 1980s library, was just going to be an 'ordinary road'.

I would be interested if anyone else had heard this.