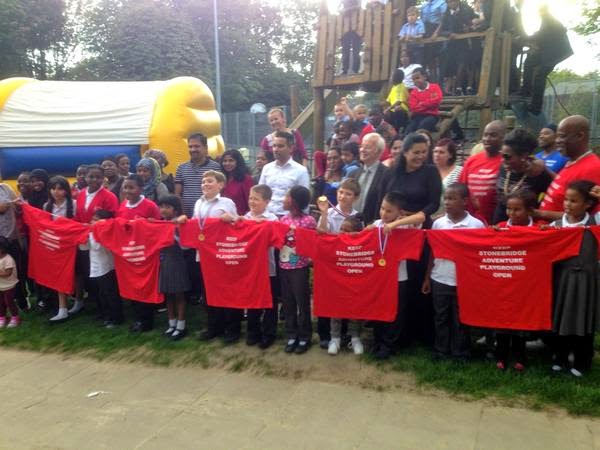 The Trustees of Brent Play Association (of which I am one) have sent the following letter to Brent councillors as the fight to save the Stonebridge Adventure Playground continues:

I cannot believe that everyone concerned with this proposal has completely lost touch with the current situation regarding the day-to-day lives of our children outside of school hours.

Whatever school representatives may say, even primary schools now employ classroom assistants who are directed to supervise play times, with particular regard to curtail fighting and bullying. This is an area of concern that has increased in recent years. Can you imagine parents, or Ofsted’s response to a school, which allowed the children out at playtime with no adult supervision whatsoever? Recently we have heard many serious concerns from parents about the large unsupervised play area in Lawrence Road, which included a deputation of parents asking us how to go about closing it down. Why?

·      it is dark after school for more than 3 months of the year,
·      rain, with no indoor facilities
·      the area is often used as a meeting / hanging out place for older teenagers
·      there have been shootings and other gun-related issues in and around this playground
·      used syringes can be found there
·      dogs are exercised there
·      no supervision leads to anti-social behavior  including bullying, swearing, smoking, drinking alcohol, and  vandalism .
·      no access to toilets or drinking water

Due to all of the above parents tell their children that if they are allowed to play out they must avoid this playground. The days of parents letting their children go out to play unsupervised are over.

Where unsupervised playgrounds of this kind are used it is always with a parent being present. We therefore believe that the new children’s play space within the proposal to expand Stonebridge school will be a danger to children and young people.

When the redevelopment of Stonebridge began the Housing Action Trust (HAT), Brent Council officers, and selected residents agreed that due to the huge amount of 4-19 year olds in this ward there would need to be two separate facilities offering supervised indoor and outdoor opportunities. The Pavilion was built for older teenagers and upwards, and it was agreed by all that the Adventure Playground was already providing the appropriate facility for the younger age group, so a new premises was not needed. The proposed closure of the Adventure Playground is reneging on this agreement, and leaves the children with nothing.

We have been the custodians of this very special place for over 40 years.

It is the only one of its kind, dedicated exclusively to children and young people, in Brent, involving them directly in the decision-making, and day-to-day management of the Centre. It is therefore highly valued by its users past and present, and has contributed to their development in all areas of life.

Stonebridge Adventure Playground should therefore be, as promised, kept and improved for future generations of children and young people.

On behalf of the BPA Trustees

Keep this place open for the youth of Stonebridge....its much needed and well-used...how can the council even consider closing this?

I used the adventure playground as a child. I remember bonfire nights, tuck shop, arts and crafts, movies, pool, arcades, table tennis and camping trips. I was welcomed to work there as a volunteer into my late teens which helped focus me toward my career in teaching. Ive been back to visit a number of times and am blown away to see children from all backgrounds, special needs and mainstream all playing together. It's currently ahead of its time.

Its heart breaking to know that there is enough money out there to supliment the money that it already raises for itself, to keep it open.
Shortsightedness must not prevail. Keep StoneBridge Adventure Playground open!!