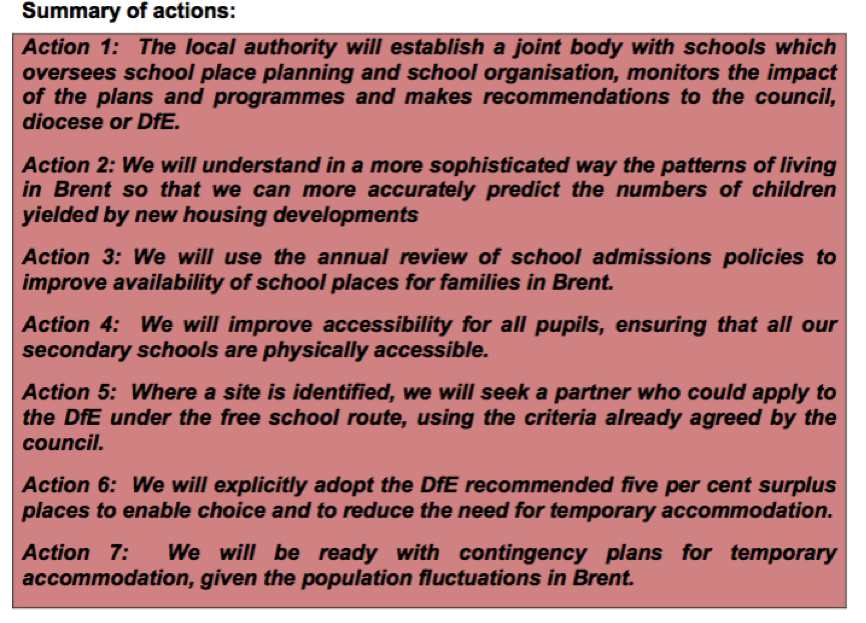 The Brent Cabinet will tomorrow consider the School Place Planning Strategy 2014-18. It includes the above actions and the following schemes:

Expansion of the following schools in 2015 at a cost of £19.5m:
Amalgamations of the following separate infant and junior schools into all-through primary schools. It should be noted that the second two  involve expansion as well as amalgamation and in the Kilburn case a new building. This is a significant challenge to headteachers in terms of disruption.:
The Cabinet will also consider the use of a former school site in The Avenue, Brondesbury for educational use. The site is currently owned by a developer. The site could potentially be used for SEN provision.

The report notes that proposed free schools in the borough will potentially provided a total of 10 forms of entry for primary pupils and 9.3 for secondary pupils in the 2014-18 period.


....to be funded directly by the Education Funding Agency (EVA) at no cost to the council. There is a risk to the council that if all of these places are not provided via this route that the council will need to provide places  and fund the associated expenditure.

This September both Gateway and Gladstone secondary free schools failed to open despite recruiting pupils.

The council's policy to seek free school partners (Action 5 above) will be controversial in the light of problems associated with free schools not opening on time, having fewer pupils than designated so provided at considerable expense, and often without the backers having a proven track.

The report can be found HERE and the full Strategy HERE