Brent Fightback Final Demand to Coalition: Give us Back Our Money

Brent Fightback supporters today presented Brent Liberal Democrats and Conservatives with a 'Final Demand' for the £142,900,000 that the Coalition  will have cut from Brent Council's budget over the current period.

This has meant cuts in valuable Council services that will hit the young, the poor, the vulnerable and the elderly.

Those making the demand included independent local activists and residents and members of the Labour, Green and Socialist Workers parties. 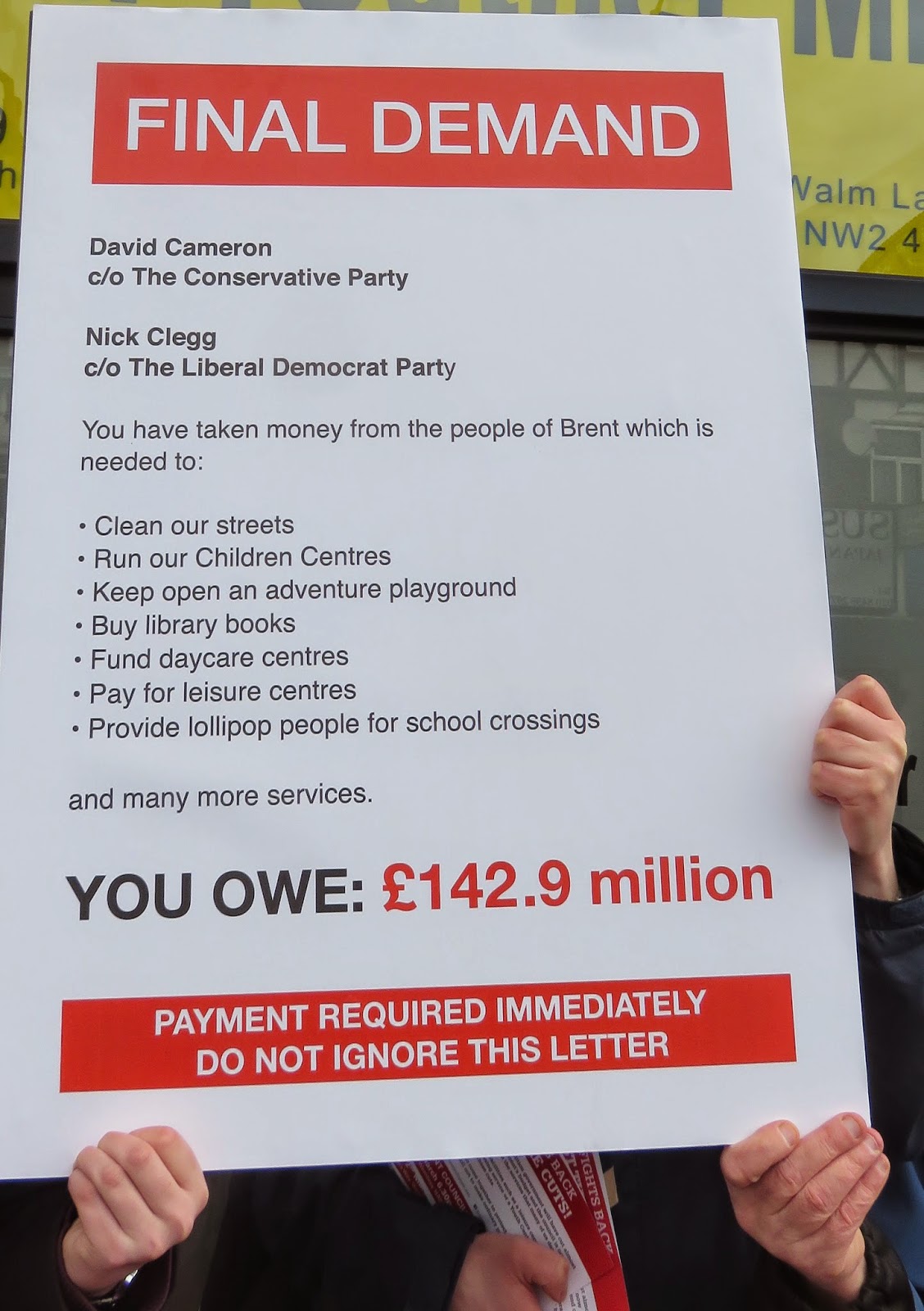 Copies of the Final Demand were posted through the letter boxes of the offices.

Thanks for this, Martin and sorry I did not manage to get over there today.

On the related matter of clawbacks, of course David Cameron has a much smoother period ahead than Working Tax Credit claimants wrongly accused of cheating.

Vulnerable people need more support services paid for out of the public purse, not more stress from a Government hell bent on pointing a scapegoating finger at everyone except itself.

Meaningless gesture politics at its best from Labour Councillors. Time to stand up against Butt & Pavey!

Don't get this. On each foto, there's Brent councillors, but theyve not fought cuts or gone for opposition to Butt. There's also Lab activisits still campaigning for party who have said theyre continung cuts. And also friends of the earth person who are suposed to be neutral.

Dont get this. Why Lab councillors and activists protesting what they didnt object to. Miller. Hector. Calderbank others. And freinds of earth person, supposed to be neutral?

They are angry that the Lib Dem Tory govt has cut £142.9 Million from Brents funding.

This was a protest against the Tory/LibDem coalition government's withdrawal of funding from Brent so of course you would expect Labour councillors to join in. Actually the question you should be asking is why more didn't come.

The protest against the Labour Council's passing of these cuts will happen on budget night on 2nd March. On that occasion I would be very surprised if any Labour councillors joined in, although I hope they will.

Its perfectly valid for Friends of the Earth to campaign as despite Ed Miliband claiming the Labour party is interested in Climate Change through their appointment of John Prescott, their shadow climate
man, Barry Gardiner is silent on cuts to the Wesh Harp Environmental Education Centre and Energy Solutions in his backyard. But then Barry did vote for more cuts, this is Labour policy & considering the party is one for career politicians or party hacks Butt & Pavey must be going against the rest of the Labour group due to greater ambition.

Good to see Councillor Miller holding up a leaflet advertising a protest against council cuts on 2 March!

Because they are having £143 Million pounds of budget taken from them by the Tories and Lib Dems at Westminster.

Is this protest not an example of them objecting to it?

Ahhhh, Tom and Sujata are shoe-twins! Is this a new realignment of the left?