Leading Greens, rallying to the Junior Doctors' cause, joined picket lines this morning 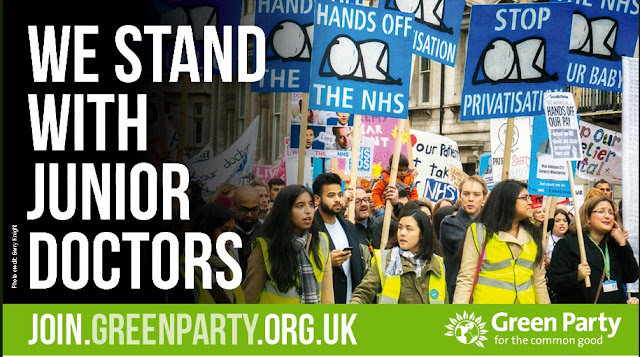 Ahead of joining the picket Caroline Lucas, MP for Brighton Pavilion, said:


We fully support the action being taken by junior doctors today.  These dedicated professionals must be treated with the respect they deserve– and the people who use the NHS have a right to being looked after by a rested and fairly paid workforce.

I know that Junior Doctors have not taken the decision to go on strike lightly but they simply don’t feel like they have any other option than to take this action.”

This strike is happening because the Government is failing to address very serious concerns around safe working conditions, while failing to offer proper recognition for those working unsocial hours. Ministers have treated Junior Doctors with contempt and subjected them to a campaign of misinformation – it’s no wonder they’re at the end of their tether.

This contract change is part of a wider Government assault on our health service. Student nurses have had their grants snatched away – and costly NHS marketisation is continuing. Now healthcare professionals are standing up to the bully boys around the Cabinet table.

Junior Doctors should be offered a contract that’s fair to them and guarantees patients the treatment they deserve. Until they get that recognition the Green Party will stand side by side with Junior Doctors in their campaign.


We all know that junior doctors do not take strike action lightly, so if they feel they have no option because the government isn’t listening to them, we all ought to believe them. We don’t let lorry or bus drivers carry on working when they’re too tired to perform their jobs safely, so it seems senseless that the Department of Health is ignoring doctors’ own concerns in the same regard.

This is a short-sighted move in every respect: doctor fatigue has been found to cause a 15 percent increase in the likelihood of medical errors, and the overstretched National Health Service will end up under even more pressure if we force junior doctors to jeopardise patient safety by working longer hours.


We know that doctors don't want to strike, but they have been driven to this position by the actions of Jeremy Hunt, who from his own testimony has clearly failed to listen to their concerns, and certainly failed to act on them."

With junior doctors set to go on strike and nurses having already marched on the streets on Saturday against the replacement of training bursaries with loans, the way in which the government has mismanaged, indeed deliberately torn apart, the NHS, is becoming apparent to all.

Campaigners have been highlighting for years the way in which privatisation has been fragmenting and damaging our health service, but it is now becoming evident to all that the government's desire is to hand our public service over to the profit-driven health multinationals, one part of which is cutting the pay and conditions of staff.


I am extremely pleased to be able to support junior doctors.

Though no-one – including the doctors themselves – ever wants to see people forced to strike, it is time the government recognised the vital job junior doctors and other health service professionals do for us all. They are part of the front-line working to keep us healthy and helping us face and overcome illness and injury.

The people of the UK recognise the vital work that they do, and that it is a risk to us all – doctors and those they treat – to remove safeguards against them working dangerously long shifts. No-one wants to be treated by exhausted doctors and no-one should have to be.

That’s why I am standing with our junior doctors. Because they – and their patients – deserve to be protected from bad policy which will increase risk to all.