That will be one of the key questions asked at Brent Scrutiny Committee tonight when they discuss the report of the Budget Scrutiny Panel. LINK

Last year a move to increase Council Tax by 2% was opposed by the Cabinet but the mood appears to have shifted since then. A 2% rise ring-fenced for Adult Social Care, as set out in the Chacellor's Autumn Statement seems inevitable. Another 2% to preserve vital services for the most vulnerable will be more controversial and debate is likely to centre around whether residents now having to pay a portion of Council tax, despite being poor, can be protected by revisions to the Council Tax Support scheme.

Much will depend on the view of Cllr Michael Pavey, deputy leader, who leads on the budget. Officers have repeatedly warned about the erosion of the Council Tax base although that has been offset to some extent by new housing coming on stream with an increased number of residents paying the tax and better collection rates.

The meeting is at 7pm tonight at the Brent Civic Centre and the public may attend.

The budgetr proposals will be discussed at Brent Connects meetings over the next few weeks: 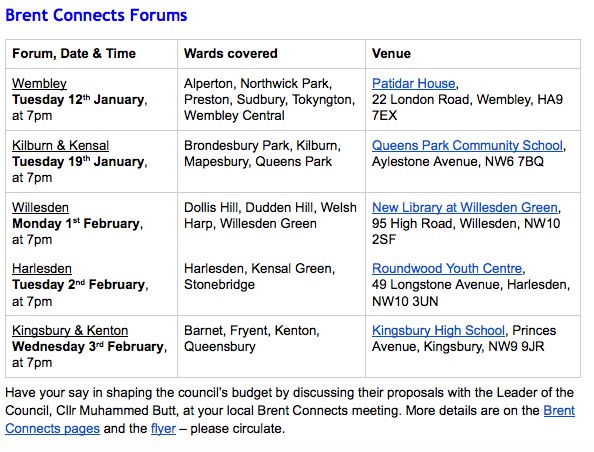 Brent Fightback will be holding an open meeting to discuss the options open to councils in the face of the devastating cuts they are being asked to make. It takes place at Brent Trades Hall on Wednesday January 13th at 7.30pm.
Posted by Martin Francis at 11:00:00

Personally, I'd say no as they can't be trusted with the money they already get from us.
e.g. this week's news story on the waste of a Mayors office (that some councils, including some Labour one's have already axed). http://www.kilburntimes.co.uk/news/brent_council_slammed_over_30k_downton_abbey_job_1_4366065