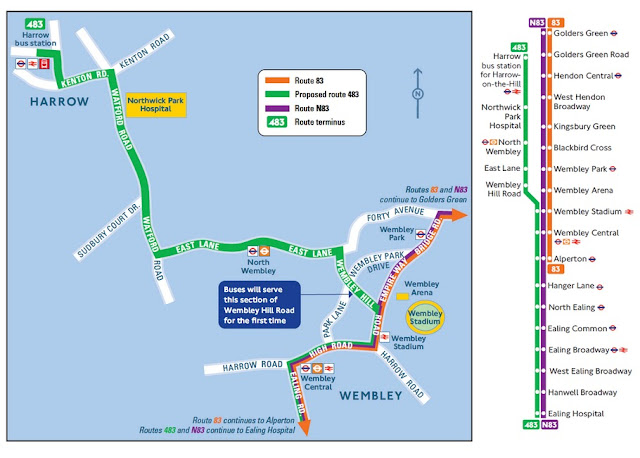 Transport for London is consulting on changes in the 83 bus route which currently runs from Golders Green to Ealing Hospital via Wembley and Alperton. Along with the 182 and 297 it is a link between Wembley Park Station (Jubilee and Metropolitan line stations and Wembley Central Station (Bakerloo, London Overground and Southern Rail).

The London bus network is kept under regular review. We have developed proposals to change route 83 to improve reliability and provide more capacity as passenger demand grows in the area.
Route 83 is a 24-hour service that runs daily between Golders Green and Ealing Hospital serving Hendon, Wembley, Alperton, Hanger Lane and Ealing. Buses run approximately every 8 minutes during the day Mondays to Saturdays, every 10 minutes during the day on Sundays and every 12 minutes on all evenings. The overnight service runs every 30 minutes on all nights of the week.

What are we proposing?

Route 83
We propose to shorten route 83 so that it would run between Golders Green and Alperton station only, and not continue on to Ealing Hospital as it does now. The frequency of this service would remain unchanged.  It would no longer be a 24-hour service; however new route N83 would continue to provide the night service covering all stops served by the current 83.

New route 483
We propose to introduce a new bus route, numbered 483, between Harrow town centre and Ealing Hospital. The proposed new route would start at Harrow bus station, and then run via College Road, Station Road, Kenton Road, Watford Road and East Lane. Buses would go along Wembley Hill Road and then follow the line of the existing route 83 from Empire Way and Wembley Stadium station to Ealing Hospital.  Buses would return over the same roads.

The proposed new route would introduce a bus service to a 400 metre section of Wembley Hill Road between Empire Way and Wembley Park Drive for the first time. We are working with the London Borough of Brent to determine whether bus stops could be introduced here.

Our proposals would provide many new direct links between places in North West London not currently possible and give additional capacity between Wembley, Northwick Park and Harrow supplementing route 182. For some though, who currently travel on route 83 between places north of Wembley and south of Alperton, a change of bus may be required to complete their journey. This would affect approximately 1,680 passengers a day, about five per cent of passengers currently using route 83 on weekdays.

Route N83
Route 83 is currently a 24-hour service.  Therefore to ensure all current stops retain a night service we are proposing to introduce a new service, N83, running between Golders Green and Ealing Hospital via the current 83 route. The frequency of this service would remain at a bus every 30 minutes on all nights.  There would be no separate night service on route 483 but route N18 will continue to link Harrow and Wembley at night via Watford Road and Harrow Road.

Drop-in sessions
You can discuss these proposals with staff from Transport for London at the following times and locations:

Have your say
We would like to know what you think about our proposals for route 83 and the introduction of new route 483. Your comments and suggestions will help inform our final decision making.
Please give us your views by completing the online survey below by Monday 22 February 2016.
Alternatively, you can: