Powney is not alone as questions raised over Flytipping Report

'Am I alone in finding this change of wording interesting?' asks James Powney LINK , drawing attention to a discrepancy between a report  on the Scrutiny Task group on Flytipping from the Chief Executive going to Brent Cabinet on January 20th and the actual body of the Task Group's Report (which is also included in the Cabinet papers). 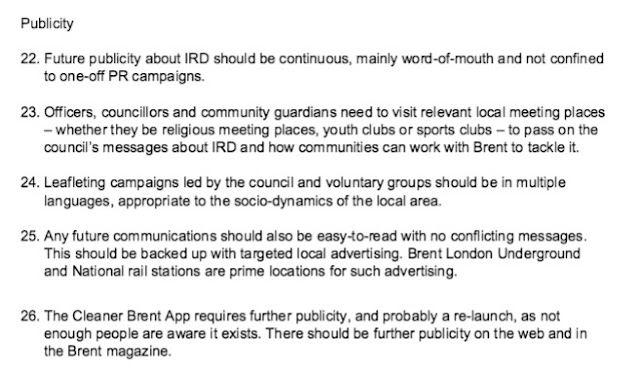 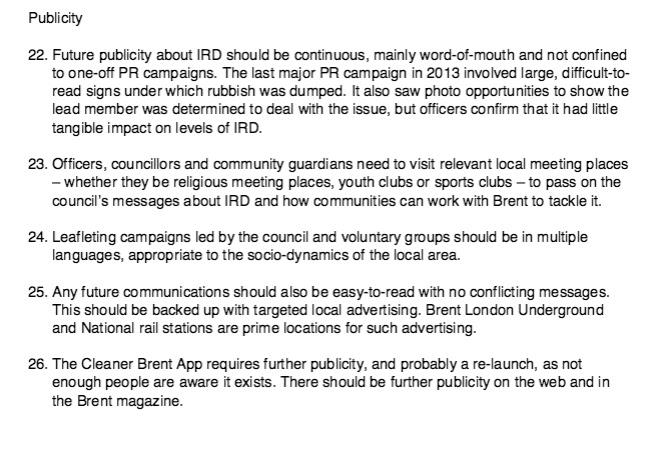 So 'Why the mysterious change in Scrutiny wording?' as James Powney asks. Could it be that someone (who?) has decided the critical second sentence in 22 should be deleted? Why and on what authority?

I quoted the whole section so that readers could see that the other points are identical so this is no simple editing of the entire report.

It could be argued that it makes no difference because the original report is also included in the Agenda but then the Cabinet is actually voting on, and adopting, the version in the Chief Executive's Report.

James Powney was  Lead Member for the Environment at the beginning of 2013 and was succeeded by Cllr Roxanne Mashari at the AGM. In 2014 Cllr Keith Perrin was elected to the position but resigned in September 2014. Cllr George Crane was appointed in his place after an interval in which there was no one in the post.  LINK  Cllr Eleanor Southwood is the current Lead Member.

It is not quite Stalin removing Trotsky from the photographic record but intriguing all the same. Is there someone at Brent Council who cannot tolerate criticism or is it just a harmless tidying up exercise?

It seems to be the continuing story of Brent being an officer-run council. Members of a committee should always be able to ask their paid officers to present reports in such fashion as to make clear what has been altered, removed, doctored etc so that Members don't have to spend tedious hours proof-reading.