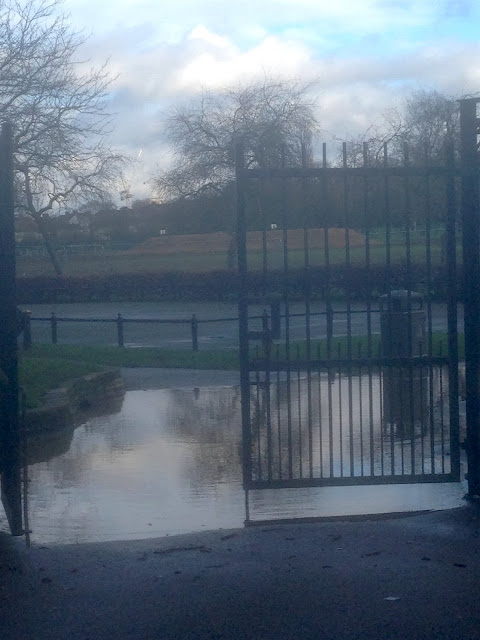 The above scene was what confronted parents yesterday morning when they attempted to take their children to Park Lane Primary School, Wembley, via the St Johns Road entrance to King Edward VII Park, instead they had to take a detour to avoid the pond.

Since Wembley Matters first raised the issue of the works going on in the park LINK  a notice has been put with a telephone contact for information but a resident contacted me yesterday to say that a promised call back had not happened. 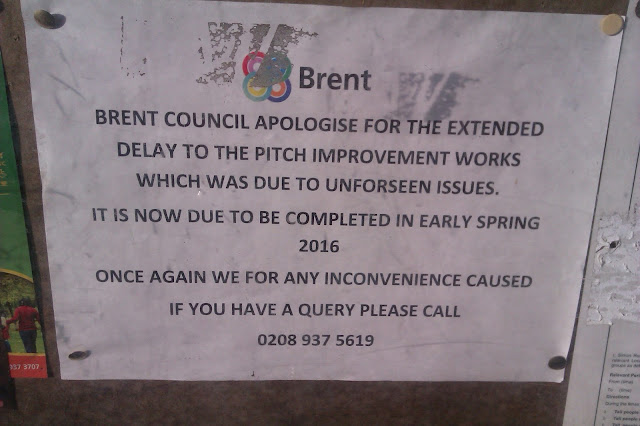 The drainage works on the playing field that started last August were supposed to take just 5 weeks at a cost of £350,000. Residents point out that the cost of fencing hire alone must have significantly increased that expenditure and of course a large part of the park is now inaccessible and the drainage is worse than ever.

Inevitably they ask how a cash-strapped council can let this situation continue.

£350,000 would have funded Stonebridge Adventure Playground for 4 years !!!

or a sports pitch ? Which would you choose?

£350,000 would have funded Stonebridge Adventure Playground for 4 years....Safe supervised provision for hundreds of children and young people.....open 7 days a week....or a soggy sports pitch....Which would you choose?

Its a complete mess and has been since August....such a terrible waste of money which could be put to much better use. I just don't understand Brent Council's sense of priorities.

Do I dare suggest that perhaps the S106 money from the Welsh School might have helped? Or that they might even have helped save the condition of the park?

I guess it is coincidence that they omit the word 'apologise' on the notice.

I don't think there was any S106 involved. The planning application is no longer available on the Council website. The football field is quite a long way from the proposed Welsh School site on the bowling green.

Interesting that the application isn't there any more. They're supposed to be archived and available. Fair point on the distance.

As planning permission was not granted there is no reason to retain the documents on the council website. This seems to be the new norm.

Is there a reason that you would want failed applications held on the website?

Initially this was so I could see if there were any S106 money involved. I didn't think so as school was far from rich and had applied to be a free school. If successful this may have led to some monet from the EFA. But more generally it is worth having failed applications on record so that we can see the grounds for refusal in the event of another application. Meanwhile how about a cafe and public toilets in the Lodge in King Edward VII Park?

16:12 - they always used to be. Brent have changed their Planning software to the same package that Barnet use. It sucks.

any response from The Council?