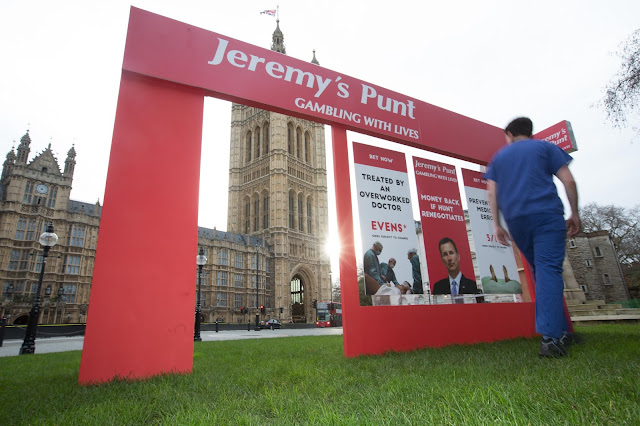 A faux betting shop storefront has been erected outside a London hospital and the Palace of Westminster by the junior doctors campaign group, ahead of the first planned strike on Tuesday January 12, to represent how Health Secretary Jeremy Hunt’s plans to introduce radical reforms to doctors’ contracts could gamble with the public’s health.

The betting shop, dubbed “Jeremy’s Punt” was launched as the Government's continued failure to address doctors' concerns that no proper safeguards have been put in place to prevent hospitals from forcing them to work dangerously long hours.

Junior doctors are worried that the new contract will lead to increasingly unsafe working patterns without adequate rest and recovery, as well as changes to the definition of ‘office hours’ weekday and weekend working. 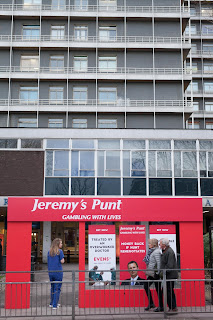 The fake betting shop was offering ‘Money Back’ if Hunt re-negotiates, ‘Evens on being treated by an overworked doctor’ and ‘3/1 on reforms causing a preventable medical error’ as a way to get the message across.

The monitoring system that protects the number of hours junior doctors can work has been in place for over 15 years, but now, under the proposed reforms, faces a drastic alteration that could put the public’s lives in danger, doctors say.

Following a freedom of information request, doctors have received confirmation from the Department Of Health that there has been no specific assessment into modeling patient safety under the new contract, showing that Hunt’s actions are a gamble.

Doctors’ fears carry merit as the most recent study into fatigue and medical errors, published in the Journal of the American Medical Association in September 2009*, revealed that fatigue could see an increase of medical error rise by 15%.


We work hard to keep our patients safe and want to continue doing so.  You wouldn’t drive for 13 hours without proper breaks, yet the government want to remove vital safeguards in their version of the new contract. Tired doctors make mistakes, this contract doesn’t protect patients or staff adequately.

We chose this profession because of an innate passion for the care of people, but these reforms are showing a lack of that for both the public and us. We cannot gamble with people’s lives, plain and simple.

Initially the government was content to remove the safeguards entirely, but under pressure from the BMA (British Medical Association), created the role of ‘guardian’ to protect junior doctors from working unsafe hours. However, the Government is insisting that hospital trusts make this appointment, without input from the BMA, leading to a conflict of interest where junior doctors believe the guardian’s true agenda will be helping the overstretched hospital trusts to cut costs, not ending unsafe practice.

The proposed contract will also mean that doctors working shifts as late as 1.59am, which are not classified as night shifts, will not receive the necessary protections (breaks and rest periods) before being back on duty.


For all of us, the strikes, planned to start on Tuesday, are the last resort to make Jeremy Hunt listen to the issues that we face on the front line of patient care. This is not about getting more money; the Government and BMA have agreed right from the start that the total cost of changes remains neutral, there’s no increase in the pay bill.

As doctors we are deeply concerned about safety. We feel the Government are not listening to our concerns and are playing games by ignoring 50,000 junior doctor whistle-blowers.

The current dispute centres on the Government’s new contract offer, which focuses on changes in working hours, patterns and conditions as well as restructuring and distributing pay within a neutral pay package.