Sian Berry: Cameron's estate policy is all about social cleansing 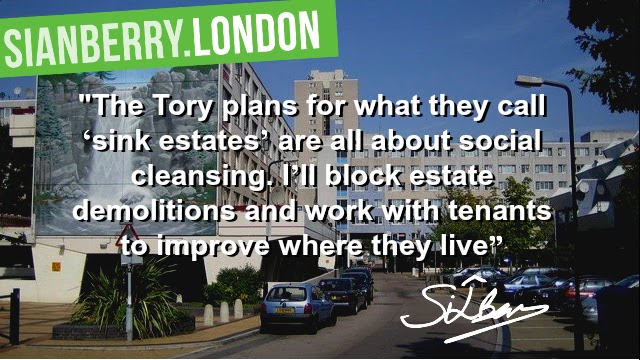 Responding to news that the government wants to bulldoze so-called sink estates in London, including Broadwater Farm in Tottenham, Green mayoral candidate Sian Berry today condemned this policy of “social cleansing” and pledged to oppose estate demolitions in the capital.


In the great majority of cases, demolition is not the right thing to do. Unless an estate is beyond repair, it’s much better to work with the community to improve housing stock than to demolish it completely.

The Greens’ housing policy for London is based on a presumption against estate demolition, especially where the local community is opposed to it. As Mayor, Sian Berry would use her powers to call in planning applications where councils want to demolish communities:


My guiding principle would be to explore all the options and let the tenants decide. I would put resources and staff into a new Community Homes Unit at City to support community-led housing schemes, especially in estate regeneration. It would help residents all over London develop their own masterplans for the kind of refurbishment and redevelopment they want for the areas they call their homes.

That’s very different to the social cleansing the Prime Minister clearly favours, which is a short-sighted as well as an ugly way to run a city. Whenever estates are demolished, they are replaced with a much smaller number of homes affordable to people on average salaries. That either forces people further away from where they work, putting more strain on the transport system, or out of the city altogether. We will eventually find that central London is a depopulated island of ‘investments’ that can’t actually function at all.

The area has a vibrant, diverse community that successfully challenged Haringey Council's plans to demolish part of the estate earlier this year and runs many valuable local projects. Like many council estates it would benefit from investment. But this should be in consultation with residents.