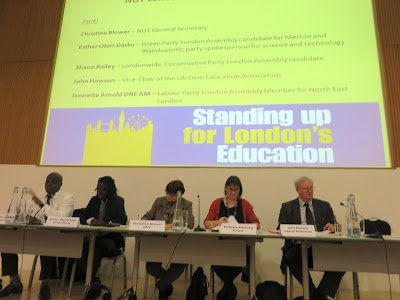 The London Teachers Housing Campaign is opposing the selling off of social social housing and requirements for social housing to move to market rents and calling for rent controls and opposition to the Housing Bill.

The Green Party GLA candidate for Merton and Wandsworth, Esther Oberi-Darko, backed the NUT's Manifesto call for rent controls and more affordable housing in London through investment by Councils to build homes. This is an issue that teachers' organisations in Brent have recently raised with Muhammed Butt.

Recruitment and retention of teachers has already been hit by the government's education policies, particularly the recent changes in curriculum and assessment, but housing presents a major practical headache for teachers who now face being priced out of the market long with the families of the children they teach.

An NUT Young Teachers' Housing Survey at the end of 2015 found that 60% of young teachers surveyed said that they could not see themselves still teaching in London in five years' time, although in that period 100,000 new school places will be required in London.  These are the stark facts that point to a growing crisis that will put at risk all the gains made in London schools in the last decade.

Of the teachers survey 59% were having to rent privately and 18% were living at home with their parents, more than were buying a property.  The NUT said:


Just like the families of too many of the children that they teach, young teachers are being forced into unsuitable housing, facing high rents and sometimes unscrupulous landlords.

Housing conditions are revealed by individual comments from teachers:


'We are five people sharing a three bedroom flat. This is the only way we can keep costs down.'

'Landlords frequently increase rent, forcing us to move or they sell property and force eviction.'

'It's noisy, horrible and with holes i the walls but it's all that I can afford.'

'We live in a tiny two-bedroom flat with three children. We can't even fit a second bed in the second bedroom. The property has damp and my daughter has asthma.'

'I work in the same borough that I grew up in. I don't want to move away from my life, my roots, just because of ridiculous housing prices.'

At yesterday's election meeting Shaun Bailey,  London List candidate for the Conservatives, seemed confused about policy, at one time seeming to support rent controls and advocating 'controlling landlords'. John Howson for the Lib Dem's was wedded to the market and Labour's Jeanette Arnold didn't bother to turn up. All the candidates supported raising Council Tax on empty properties. None mentioned the recent proposal from a GLA Committee to pilot a Land Value Tax in London LINK . Esther Oberi-Darko spoke about Sian Berry's proposal for a London Renters Union to help exploited private tenants challenge landlords.

On Sunday, March 13th, there is a National Demonstration against the Housing Bill. The Bill includes proposals to  off existing council homes to the highest bidder, removes secure tenancies and imposes 'pay to stay' market-linked rent rises for council and housing association tenants and reduces rights for private renters.