Observer reopens the mystery of the Mary Fedden paintings, the deputy and the council 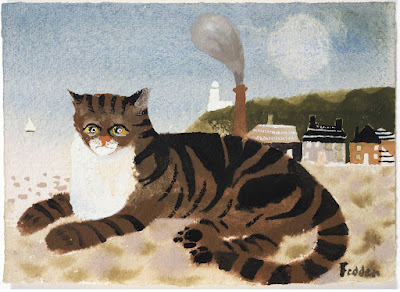 The Observer today  LINK asks some pertinent questions about  the paintings by Mary Fedden that were given to Copland High School (now Ark Elvin) and then, according to Brent Council, retrieved by them from the school, which was hit by a financial scandal, and 'returned to the Portland Gallery on Tuesday 13th May 2014.' The Council went on to say, 'It is a matter for the estate of the late Mrs Fedden to decide where the paintings are displayed, not the council.'

A former art teacher ar Copland, Jenny Williams, is reported by the Observer as commenting, 'If Mary Fedden wanted the children in Wembley to have these paintings, that is where they should be. It is very sad if after all that has happened at the school they are simply sold off to a private collector.'

The issue of whether Fedden wanted children to have the paintings is critical. Regular readers may recall previous coverage on Wembley Matters of this issue. I reprint some of comments below:

Seeing 'millions' and Copland School in the same article should ring a bell with Mr Butt and Mr Pavey and have them both sticking a post-it Note to Self on their fridges as follows:

'1. Find out progress of the 'pursuit of costs through the civil courts' which we promised when we told the gobsmacked judge in the dodgy headmaster Davies case that we weren't applying for costs.

2. Find out progress in the pursuit of the overpaid 'bonuses' to Davies and chums in same case.

3. Find out what really happened to the Mary Fedden paintings

Alison Hopkins24 October 2014 at 18:22
What were the Mary Fedden paintings? I mean, I know who she was, but were there some in Brent's possession?