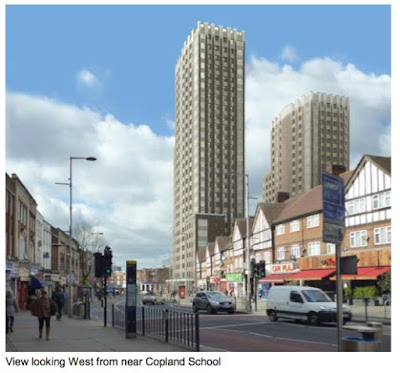 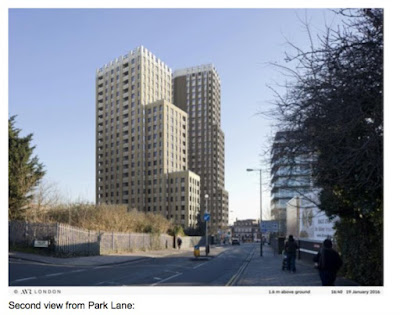 Having recently posted LINK a story about the 'monster' that Barnet Council and Barratt Homes have erected on the banks of the Welsh Harp it pains me to see that Brent Council are proposing a 'twin towers' development in the heart of Wembley in which the highest tower is only 3 storeys lower than the West Hendon development.

The developer's, The Hub Group. in their own illustration of the proposed scheme LINK cut off the upper storeys but it is clear that the new buildings will dwarf the Wembley High Road and as I showed with the West Hendon building will dominate the local landscape. I fear it will loom over Park Lane Primary School and King Edward VII Park which are further up Park Lane. 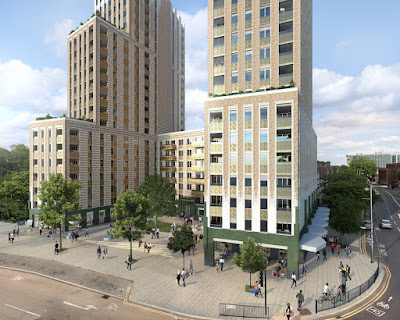 The Officer's Report LINK states that despite the issues around height they support the application in the wider context of regeneration and ongoing changes to the local buildings profile:

As with the Brent House application the planners recognise that the amount of amenity space in the development is deficient but tolerate that on the grounds that it is a town centre development with space constraints.

The report has a long section on the issue of 'affordable housing' on the site and viability studies. The proposal that emerged is that the North block will have affordable housing consisting of:

The other units in the block would be let at open market rents:

The 136 units in the South Block will be sold on the open market.

The officers contend that this is better than the initial 43% 'affordable' offer from The Hub Group because that offer was time limited and the eventual agreement is in perpetuity.

Whichever way the 50% affordable target has not been met.

The report notes that no representations have been received from councillors in the affected wards of Preston, Wembley Central and Tokyngton. 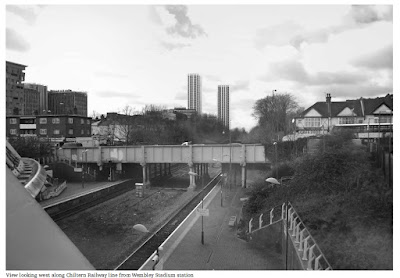 I approved of the regeneration plan of Monster 'Twin Towers' for Park Lane/Wembley High Road with green spaces. I think it with look wonderful and modern and creative.

From your choice of language I imagine that you're supporting the party line on this lumpen project. Presumably you'll be making plans to move into a place directly underneath it then.
It's sweet that you are still able to take verbiage like 'regeneration' and 'green spaces' at face value, however.

You neglect to mention that they will provide a community centre and an attractive focal area at ground level along with some new shops, anything would be better than what is there now.

Hi I put the link so that people could see the detail but have added a Ground Floor Plan for readers' benefit. I think the building would be fine in a more appropriate environment of similar height buildings in a city centre. It is the height that I see as being the main problem. The community centre is a worthwhile concession I agree and as for the shops there are already some on the present site and from the plans it looks as if there will be fewer in the new development. 'Anything would be better than what is there now' - I don't agree with the 'anything'.

It is interesting the The Hub appear to be critical of the new developments that have already taken plave at Wemblet Central Station/Square and Elizabet House. On their Consultation website they state:

Wembley High Road has benefitted from some
developments of mixed quality over recent years,
with the development around Wembley Central
Station being a huge missed opportunity to create
world class public realm together with buildings of
a superior quality

If tower blocks are in, why did they demolish Chalkhill estate? Hope the new flats each have a Garchey.

Where are residents access to well-managed and safe green spaces for the children who will be brought up in the towers? Tree islands do not equate to spaces for nature and the building hardly seems future proof.
It would benefit with nature integrated into the building through green roofs, green walls or even some greenery for the streets.

You were right about the Welsh Harp development. You can see the block towering over the greenery of Barn Hill. It is such poor planning.

They should keep the height of future buildings lower - no more than 4 levels, as the change to the urban landscape will otherwise darken the street. Any new development should follow the style of the urban area.