SOS: SAVE OUR SCHOOLS Westminster Cathedral 5.30pm tonight - we can defeat these plans 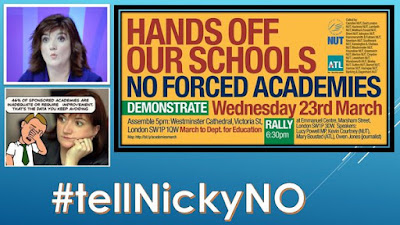 I hear teachers will be joined by some head teachers and governors, as well as hundreds concerned that their schools are being stolen, at this evening's protest against government plans to force all schools to become academies. Unfortunately a Brent Council briefing meeting for head teachers and chairs of governors is being held at the same time so I won't be able to go.  I hope thousands turn out to show the government that their plans will be met with resistance - not only to defend democratic oversight of education but also to prevent privatisation of our schools.

It is important to stress that the plans are only at White Paper stage, they are not legislation, so heads and governors should not be panicked into premature action. The proposals are being opposed by the Local Government Association, Tory shire counties, the NAHT and parent groups, and (see below) the Financial Times and even David Cameron's own Tory local lead on schools. It is a battle that can be won.

A petition calling for a public inquiry and referendum on the plans has already gained 130,000 signatures and organisers hope for even more. 100,000 earns the possibility of a House of Commons debate on the issue. Please sign LINK

Meanwhile the Financial Times has raised doubts about the plans:

Even the Tory lead for schools in David Cameron's home country has denounced the plans as 'Big Brother Gone Mad': 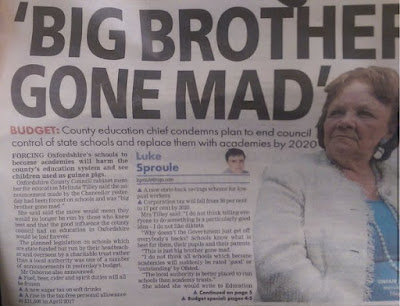 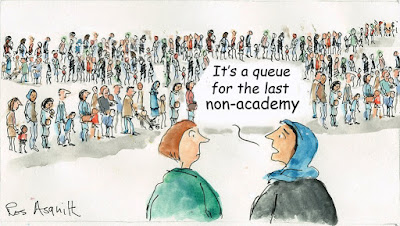