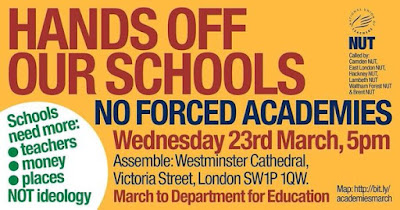 It was fitting that it was the Chancellor of the Exchequer who announced the new government policy of forcing every local authority school to become an academy because the policy has everything to do with the seizing of public assets for private profit and very little to do with education.

On Twitter yesterday I called it a proposal with no democratic mandate to abolish democratic accountability fo schools.

It is now widely acknowledged that there is no convincing proof that acdemisation improves the quality of education, even when judged solely by narrow examination results. At the same time Ofsted has been critical of the educational failure of some academy chains and the high salaries (creamed off from schools) that their CEOs command.

It is easy to ignore the fact that the public service ethos in local government is not just limited to Labour or Lib Dem led authorities but is also shared by some Conservatives. LINK   This shared commitment could be the basis of a Grand Alliance to fight to maintain the role of local authorities in the oversight of educational provision.

The statement by the Local Government Association yesterday LINK is particularly significant and an opportunity for dialogue with an influential body that could make an impact on the Chancellor's plans.

The government often claims that parents are in favour of 'freeing' schools from local authority 'control' but there is no evidence for this. London Councils research in September 2014 indicated that parents would like to see MORE powers for local authorities to intervene in poorly performing academies and free schools LINK:
HERE