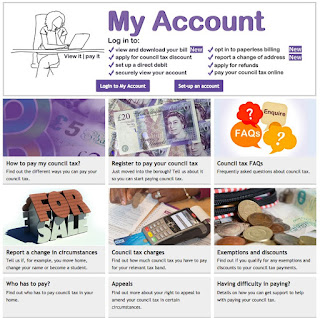 Camden Council is currently consulting on changes in its Council Tax Reduction Scheme and its preferred option would mean that those people of working age with the lowest income would pay no Council Tax.

At present in Brent, apart from pensioners, everyone pays something towards Council Tax. A 20% payment, one of the highest in London,  is expected unless the person concerned falls into a 'protected' group if:

When the Brent scheme was consulted on in 2013 Zacchaeus 2000 put in a powerful submission arguing for a 100% reduction for the most vulnerable. LINK

In February this year Cllr  Butt told me at the Civic Centre consultation that there was not time to review the borough's Council Tax Support Scheme for 2016-17 despite the proposed rise of 3.99% in Council Tax. As a further increase of 3.99% is likely in 2017-18 (and beyond) we should expect Brent Coucil to take a leaf out of Camden's book and review its scheme without delay.

In Camden it has been argued that money will be saved by not having to chase up the poorest residents for unpaid Council Tax, releasing funds  to pursue non-payment by those able to pay.

Since 2013 the council has removed the previous 100 per cent exemption for people on benefits – including disabled people and families with low incomes and children.

It now charges people with the lowest incomes at least 8.5 per cent of the normal rate, something it’s very hard to pay when you have no way of making the money required.

I have spoken out about this, called for the exemption to be 100 per cent, and have regularly criticised the council charging additional legal costs for enforcement against people who fall behind.

The fact is that this is revenue from people who would pay if they could, but simply don’t have the income.

They are more than likely to be subject to benefit sanctions and the bedroom tax already, and it has been inhumane for the past three years to be driving our poorest people into impossible debts.

I urge all Camden residents to respond to this consultation and say you are in favour of the 100 per cent exemption being restored.

These are the options offered by Camden Council in its consultation:

Pensioners are already entitled to a maximum of 100% support.

There are five options set out below impacting on working age households only:

Maximum CTRS discount available remains at 91.5% with no changes to eligibility or the applicable amount.
Maximum CTRS discount available increases to 100% with no changes to eligibility.
This would increase the amount of Council Tax payable by all working age claimants.
The scheme could provide protection to specified groups, such as families or disabled claimants, whilst keeping a deduction for all other claimants.
Develop a new scheme altogether, with discounts based on a different calculation than the current scheme. Any scheme would be subject to a full consultation and would not be implemented until April 2018.
Camden’s preferred option is option 2.
We currently collect about £1.03 million from customers on the maximum discount compared to £120 million for the whole borough. As well as relieving the burden of council tax on our poorest residents, this proposal will enable us to focus more resources on pursuing other debts from those that are seeking to avoid paying.
Posted by Martin Francis at 17:51:00

I would much like to see a complete overhaul of the tax payment system for council tax. Many people believe that all pensioners get council tax rebate. This is not so .inly those receiving Guaranteed Income Payment receive this benefit. Unless you are on another qualifying benefit you pay exactly the same as a fully waged person although your income is very much less than theirs.This needs to be looked at and adjusted

The answer to the question in your title is "YES".