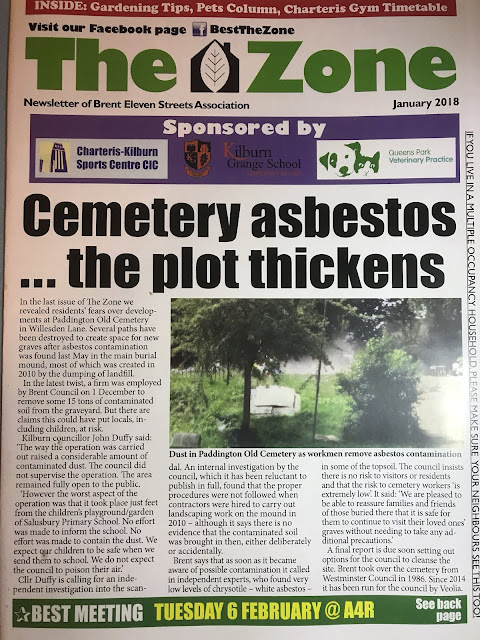 As Green Party Trade Union Liaison Officer for Brent and for the London Federation of Green Parties, and as a council tax paying resident of the London Borough of Brent, I am very concerned to hear from Councillor Duffy’s email, that there are contamination problems arising from the dumping and disposal of asbestos contaminated soil in Paddington Old Cemetery.

As I am sure the CEO of Brent and the Brent Councillors dealing with this matter, are aware asbestos is relatively safe when undisturbed, but if it is caused to give off dust, which is harmful if inhaled, that dust can give rise to severe health problems which may not be apparent until years later.

I would therefore like assurances that the Council did not deliberately send asbestos contaminated waste to Paddington Old Cemetery, and that once Council became aware of the presence of such waste, it ensured that:

1.  all workers dealing with the waste were fully briefed as to its potentially hazardous nature and advised to inform their GPs of possible exposure.

2.  all workers dealing with the waste were fully equipped with appropriate protection

3.  measures were taken to ensure that the waste would affect members of the public visiting the Cemetery and the students and staff of the school which neighbours the Cemetery.

4.  the school and the NEU Health and Safety representative was notified of the presence of the waste and warned when it was likely to be disturbed.

Yours sincerely Peter Murry
Posted by Martin Francis at 10:12:00