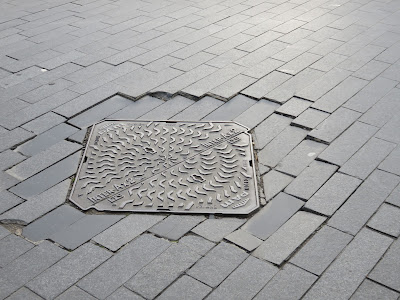 Paul Lorber has written to Brent CEO Carolyn Downs calling on her to halt efforts to repair the expensive brick paving outside the Civic Centre and to tarmac the road, Engineer's Way, instead:


You will recall that I expressed my concern about the crumbling road outside
the Civic Centre recently.

You advised of repairs which were carried out but clearly did not work.

The road is a mess again and in my view both a danger and risking causing
damage to private vehicles driving over it. It is also a danger to
pedestrians who cross the road to get to the shops or the square opposite
the Civic Centre.

The materials used are clearly unsuitable for a road in the middle of a
permanent building site around Wembley Stadium.

I think the time has come to accept that a big mistake was made using the
individual stones for this road, that money was wasted but that time has now
come for dig up the stones and replace them with level tarmac road which is
not subject to constant crumbling as a result of the volume of large lorries
passing by.

Please confirm that action will at long last be taken to provide a safe road
in front if the Civic Centre and prevent Brent Council becoming a laughing
stock for allowing for this disaster to continue.

Brent Council is already a laughing stock on this.
Why oh why spend all this money on this visually attractive surface and then allow it to be ruined by all the builders' heavy lorries. These could have been banned from using this road as a throughway and should have been made to use the parallel roads instead. I am sure that any council with a grain of sense would have done this.

There is so much development going on that it is hard to keep track but I think this is the only route available to get access to some of them.

Ash Wednesday is 14th February this year. Rather than sending the customary Valentine to Cllr Butt on that day, Brent citizens might like to show what they think of the Leader on this and a variety of other matters by making use of the broken paving and directing sections of it towards his Palace's reassuringly expensive windows. It could be called:

LOB A LUMP FOR LENT IN BRENT (other faiths welcome)

Let's not forget that this cost £800K. At a time of slashed budgets, that's obscene.

that would have run Stonebridge adventure Centre for 9 years!!!