Pressure mounts over academisation of The Village School 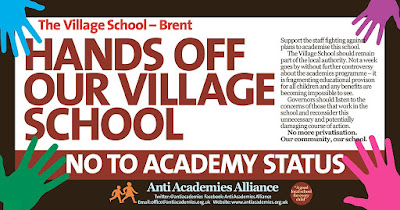 Brent North Labour Party has now joined Brent Central CLP LINK in opposing the academisation of The Village School in Kingsbury through the formation of a Multi-Academy Trust with Woodfield School LINK.

Brent North CLP welcomed what they called Brent Council's 'decision' to return out-sourced services in-house and said that this should also apply to academies, noting the return of Sandown Bay Academy in the Isle of Wight to local authority control. They called for Labour's National Education Service to include a policy to return all privatised academies to local authority control.

They appealed to all governors of the school, whose chair is Brent North Labour member and the Labour Group Whip,  Cllr Sandra Kabir, to pause the process and postpone the vote on academisation due on February 26th so that the school, local authority and unions could have talks to consider alternatives to academisation. In addition they asked that union representatives, who are also staff governors, be allowed to report back on what is going on at governor meetings.

Finally the motion called for the final vote on academisation to take place publicly with observers able to attend and speak.

The motion passed without opposition and, according to sources, the support of Barry Gardiner MP (Labour, Brent) who was present at the meeting.
Posted by Martin Francis at 12:25:00