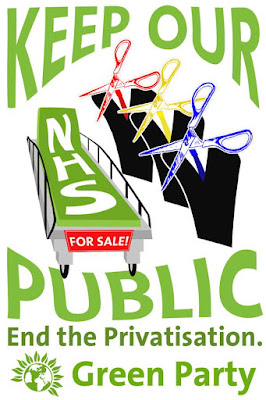 The Green Party has responded to the winter crisis gripping the NHS, calling on the Government to reverse cuts, end privatisation and give the NHS the funding it needs.

Larry Sanders, Green Party health spokesperson said the hard work of front line staff is being undermined by the Government’s refusal to properly fund the NHS.


News this week of thousands of cancelled operations and record numbers of patients waiting in ambulances has confirmed what we already knew – the NHS is on its knees. Front line staff are working incredibly hard to care for people, but their efforts are being undermined on a daily basis by the Government’s refusal to give the NHS the funding it so desperately needs.

Jeremy Hunt’s hollow apology for the cancelled operations fixes nothing.  We need him to reverse the cuts, fund our health service properly and end privatisation.

The UK spends a smaller percentage of its GDP on health than countries like France and Germany. Instead of wasting billions on Trident we could be looking after people who need health and social care. It’s time for the Government to acknowledge that we can afford to fund health and social care if it makes the right political choices.