Affordable Housing – what is the truth about different rent levels?

Guest post by Philip Grant, in a personal capacity 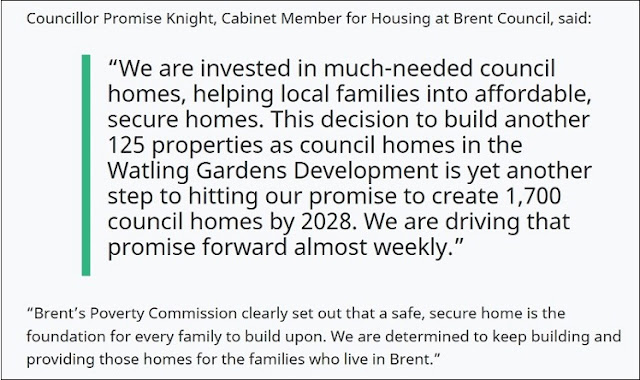 Extract from a Brent Council press release in June 2022, after Cabinet had decided to change 24 of the 125 homes on its Watling Gardens development from London Affordable Rent to Shared Ownership.

Martin’s blog about the 9 June Call-in Scrutiny meeting, about the award of a contract for the Council’s Morland Gardens development, mentioned a claim made by Brent’s Strategic Director (Regeneration and Environment), Alan Lunt, that London Affordable Rents were only £10 a week more than Social Rents.

I was at that meeting, and was incredulous when I heard him say that. It also attracted some attention on social media. Now that the minutes of that meeting are on the agenda for the Resources and Public Realm Scrutiny Committee meeting next Tuesday, 19 July, I have taken the opportunity to challenge that claim.

This is the full text of an open email I sent to Councillor Rita Conneely, the Chair of that committee (with copy to Alan Lunt, and all members of the committee), on the afternoon of 14 July:-

This is an Open Email

This email will not be as long as my email to you on 12 July, on matters arising from the minutes of the 9 March meeting.

It does, however, raise the same point that I made: it is important for proper scrutiny that Lead Members and Senior Officers should be honest when dealing with matters being considered by Brent's Scrutiny Committees, and should not try to mislead you in what they write in reports or say at committee meetings.

The minutes of the Call-in meeting on 9 June include the record of an answer given by the Strategic Director (Regeneration and Environment) to a question from a member of your committee:

'In response to a question from Councillor Ahmadi Moghaddam referencing affordable rents, it was noted that these rents were only £10 more a week than social rents.'

That is a correct record of what Alan Lunt said about the difference between London Affordable Rent and Social Rent levels. However, there was incredulity among a number of members of the public watching the meeting (and by some councillors) over that answer.

I can show why many felt that your committee were being misled by that answer, by using an extract from the Affordable Housing Statement, submitted one year ago as part of Brent Council's planning application for the Watling Gardens redevelopment (21/2473), which gives a comparison between Social Rent and London Affordable Rent levels for that scheme: 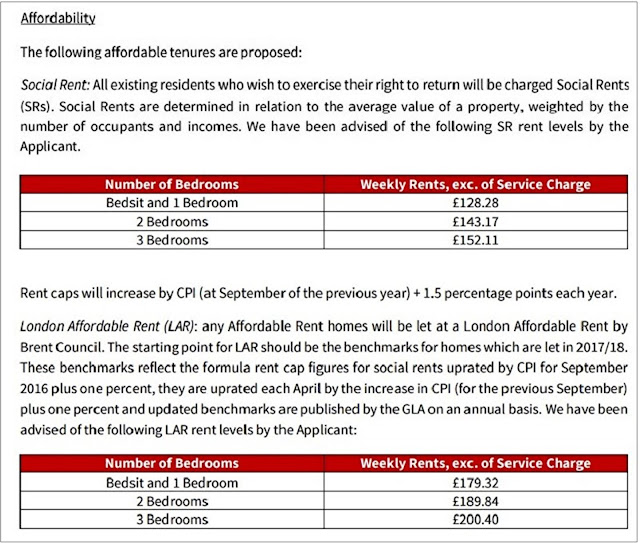 You will note that both SR and LAR rent levels had been provided for this document 'by the Applicant' (Brent Council), and that the London Affordable Rents are around £50 a week more than Social Rents.

I am copying this email to Alan Lunt, as well as to the members of your Resources and Public Realm Scrutiny Committee.

I would strongly suggest that Mr Lunt is requested to address your committee, under item 4 of your agenda next Tuesday, as a matter arising from the minutes of the Call-in Meeting on 9 June, either to correct the answer that he gave about the difference between London Affordable Rent and Social Rent levels, or to provide the evidence that LAR 'rents were only £10 more a week than social rents', if he still maintains that to be the case.

On a final point, I welcome the note at the end of these minutes of 'a commitment from the Committee to want to see genuinely affordable homes for residents going forward.'

As mentioned in my earlier email, Social Rents and London Affordable Rents are the only genuinely affordable rents. Lead Members and Council Officers should not be allowed to pass off Shared Ownership or any tenure other than SR of LAR as "affordable homes". Thank you.

When will this item go back to Scrutiny with the correct answers as pinpointed above now that the Strategic Director is on his way out of the Council. We all would like to know why he's going. We can only surmise.

I had not heard that Alan Lunt is leaving Brent Council. Where is that information published, please?

I've watched the webcast of the R&PR Scrutiny zoom meeting, to find out what was said about "matters arising" from the minutes of the previous meetings (9 March and "call-in" on 9 June). There was no mention of a correction over the claim that there was only a £10 a week difference between Social Rent levels and LAR.

Nor was there any mention or apology over Mr Lunt's failure to inform the 9 June meeting that he could not actually award the contract they were considering, because the time limit for doing so had expired at the end of May.

Philip. The last Cabinet Meeting in the first 10 minutes

Why are Brent Officers allowed to get away with misleading Councillors and the public, and how often is this happening. It is now quite clear the the Strategic Director Alan Lunt misled the Scrutiny Committee on at least one point when 'In response to a question from Councillor Ahmadi Moghaddam referencing affordable rents, he said that these rents were only £10 more a week more than social rents.' when previously the Council had published data showing the difference was around £50 a week? Something must be done to stop this happening again, and there should be repercusions and apologies.