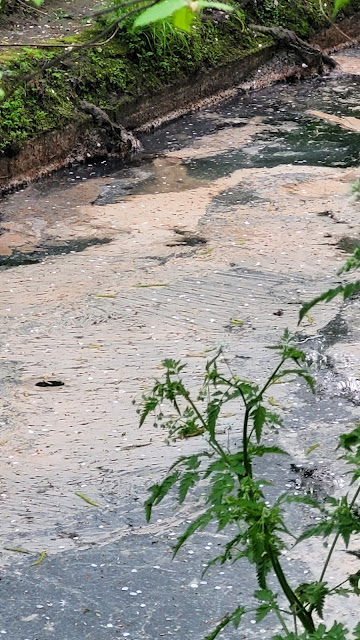 Wembley Matters has covered the long-running issue of sewage and other pollution of the Wealdstone Brook that runs through parts of Harrow and Brent. Environmental campaigners, local residents and local political parties, have joined together to put pressure on the Environment Agency and Thames Water to take action.

As a member of Brent Green Party I welcome this cross-party and non-party approach to an important local environmental issue that affects everyone regardless of party.

At Full Council on July 11th Kenton resident John Poole will be make a deputation about the matter and later a motion from the Conservative Group, which I hope will received support from across the council chamber, will ask Brent Council to do all in its power to ensure the brook is cleaned up by the relevant agencies,  rectify wrongly connected foul sewers and consider legal action.

This is the Conservative Group Motion

Pollution of the Wealdstone Brook

The Wealdstone Brook, which runs in open water, starts in Harrow, runs through Woodcock Park in Kenton and then into Wembley past all the new developments around the stadium before reaching the River Brent, has been heavily polluted with untreated human sewage and toxic chemicals for some considerable time.

The Wealdstone Brook has nothing living in it – it is effectively a dead river.  The toxic smells which have come from liquids evaporating at low temperatures from the Brook water are nauseating and residents who live close to the Brook or have been walking close to the Brook in Woodcock Park, have been feeling physically sick as a result of these noxious odours.

Thames Water, who have been investigating the sources of the pollution, have admitted liability for cleaning up the pollution.  They have agreed that the pollution of the Wealdstone Brook is one of the worst they have come across but as a result of the shared responsibility for the maintenance of the Brook as it passes through Brent, Brent Council and the Environment Agency must also share some of the responsibility.

As a result the residents living nearby have expressed their disgust at the state of the Brook and consider that Brent Council should have declared this to be a ‘Major Incident’ once it had reports of untreated human sewage, toxic gases and smells vaporising from the water of the Wealdstone Brook.

To do whatever is necessary and within the Council’s power to ensure that the water in Wealdstone Brook is cleaned up.

To do what the Council can to ensure that the agencies concerned take the necessary steps to detect and rectify all wrongly connected foul sewers which run into the Brook and to put them right at no cost to Council tax payers, in Brent.

To seek legal opinion as to whether legal action can be taken against the agencies that have responsibility for ensuring that the Wealdstone Brook is free of pollution if there is no immediate rectification of the problem.

To ensure in light of a serious risk to public health and as a matter of urgency the necessary actions are taken as soon as possible to put the foregoing into practice.

Don't be daft, Towerblock Tatler for Watford doesn't work with anyone, presumably that's the way Stamer's pink Tories want Labour Councillors to be.

Brent's Labour Councillors don't give a Wealdstone Brook about the environment