Cllr Promise Knight sets out the Council's case for in-fill

View of the estate currently 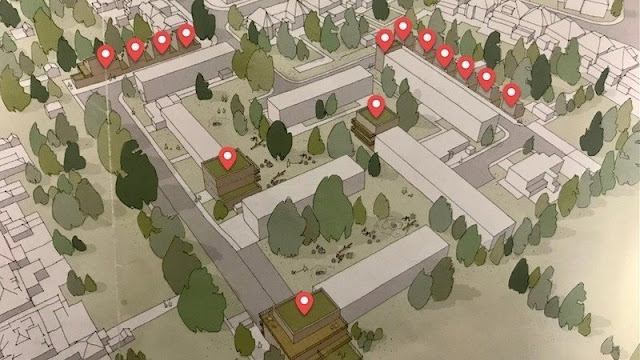 Residents of the Clement Close estate in Brondesbury Park have set up this petition opposing the Council's development proposals put forward as as part of their estate in-fill programme.

On Friday 24 June 2022, leaflets were distributed across Clement Close and neighbouring properties to inform residents of the proposed redevelopment of Clement Close.

Although we understand the need for more affordable housing and agree with Brent’s Council aspiration to make the most of its under-used land and property assets, we argue that Clement Close is NOT under-used, nor is it suitable for the outlined development, and we strongly oppose this proposal.

After careful review of your proposal, we the residents of Clement Close have put together the following summary of our concerns. The proposed development would result in:

1.    Substantial loss of privacy for many residents of Clement Close and neighbouring properties: The windows of the new buildings would be overlooking the windows and/or gardens of existing properties.

2.   Substantial overshadowing of adjoining buildings: The importance of natural light on physical and mental health has been well-established. Cramming 22 new family homes in “gaps” would have a severe impact on the wellbeing of all Clement Close residents.

3.   Loss of trees: Clement Close boasts many beautiful mature trees, which would need to be removed if the proposal goes ahead. The role of trees in a city cannot be underestimated. Not only do they absorb excess CO2 and slow down the rate of global warming, but they release oxygen, reduce wind speeds, cool the air, prevent flooding and boost wildlife. Removing these trees from the estate while increasing human occupancy by 25% would go against Brent Climate & Ecological Emergency Strategy and Brent Corporate Environmental Policy Statement, which specifically state Brent’s commitment to “enhancing the ecological value of land for which the Council is responsible”, and “integrating environmental and sustainability considerations into all decision making considered to have significant environmental implications”.

4.   Adequacy of parking/loading/turning and concerns around access for emergency vehicles: With the proposal to narrow the road to a single lane to make space for a row of new houses on the eastern side of Clement Close, parking, turning and road access would be severely impacted. Access to the far end of the site by wide vehicles, such as emergency vehicles or refuse collection trucks would be seriously compromised. The Cabinet for Housing, Homelessness and Renters Security is probably aware that #1 Clement Close is a recently redeveloped, council-owned facility for adults with special needs, and that ambulances have been called to the site regularly. In addition, refuse collection trucks are already struggling with access.

6.   Substantial impact on visual amenity resulting from the layout and density of building: the addition of new buildings, combined with the loss of green spaces, would turn Clement Close into a concrete jungle. The overcrowding would also result in higher levels of noises and disturbances, which would be detrimental to the wellbeing of all residents – current and new. This would again go against Brent’s commitment to “improving the quality of life”, as highlighted in Brent Corporate Environmental Policy Statement.

7.    Loss of existing services: the current plans appear to threaten existing amenities relied upon by many residents including: ground-floor storage cupboards for upper-floor flats, bicycle storage (some of which has only just been installed), recycling facilities. There is no clear plan for where these existing services would be rebuilt/moved to on the current plans. Most importantly for our youngest residents the plans seem to involve building over the existing climbing frame/slide and a bench which form a central part of community life for Clement Close children.

We, the residents of Clement Close and neighbouring properties, are hereby firmly opposing the current development proposal.

LINK TO THE PETITION

LINK TO BRENT COUNCIL'S CONSULTATION ON THE PROPOSALS

Brent has an exhibition slot tomorrow for affected/interested members of the wider community: https://www.kilburntimes.co.uk/news/housing/kilburn-square-exhibition-9136746

And there's more background, plus a contact route, on the SOS website https://save-our-square.org (which will be fully updated soon)

Thank you Martin for posting about Clement Close and our petition. And thank you Keith for your support!

It makes good sense for residents threatened with unreasonable Brent Council infill schemes to stand together and fight together!!!

What a dour (gloomy in manner) video that is unlikely to convince anyone they know what they are doing. The swaps between different types of council and other housing rent types and joint ownership just shows that the council are still trying to mislead the residents of Brent. There was only one mention of Social Rent, and that was in the commentary and not by the Cabinet Member for Misleading Residents on Housing Matters.

The video was produced by the consultant company (set up by ex-councillors - not from Brent - to profit from helping to get developments, both private and local authority, accepted by planning) who Brent are paying to try and persuade residents that they have some say over the infill scheme.

It gives the appearance of "consultation", but that should have been done much earlier in the process. I tried to get this message across to the previous Lead Member for Housing, Eleanor Southwood, when Martin and I wrote blogs about Brent's "hidden" Housing plans last summer. Unfortunately, she and Brent's New Council Homes team are unwilling to take notice of anyone who doesn't agree with the way they think and act.

I used to think that Councillors were supposed to represent residents, it seems I was wrong

It was very good to hear at today's Cabinet Meeting (of the 14th July 2022), that Cllr Promise Knight stated that the Capital Investment for the Council Homes at South Kilburn and St Raph's will be for "Much needed Social Housing provision" this statement can be found on the webcast 10 minutes in. No (un) affordable homes this time. Let's just hope they aren't going to be as the BBC puts in when describing a part of Brent as "‘It’s like an oven’: Life in Britain’s hottest neighbourhoods". https://www.bbc.co.uk/news/uk-62126463

You have to be cautious when Brent council, especially Cabinet members, make statements about Social Housing and Affordable Housing.

The term "Social Housing" can cover the whole of rented housing provided by Councils and Housing Associations. What we need are firm and clear commitments that these Council homes, and others, will be let at Social Rent levels.

It's similar with "Affordable Housing", which can include Shared Ownership or Intermediate Rent level. What we need from the Council, and Cabinet members, are clear promises that all of the homes they build will be for GENUINELY Affordable Rents.

The only rent levels which fall into that category are Social Rent and London Affordable Rent (and even LAR can be too high for many families if it is in addition to Service Charges, which can take it up to 80% of Market Rent level).

So, we need honesty from the Council on housing and especially the Cabinet who are chosen by our Emperor Butt. However, are there extreme right wing rumblings in the ranks?

A word of warning on I4B and Firstwave, do read Public Eye No 1566 Page 17, yes Rotten Boroughs! Read the second article "Debt by Debt" it is about Croydon, but the similarities to Brent are stark.

Interest rates are climbing with little chance of reversal in the short term (the last time Britain had inflation at the current levels, interest rates went into double figures and the housing market crashed) - One of many Council's REDS the debt from its failings on Granville New Homes, will it be one of the straws that'll break the HRA's and Council's back?

What about the Council's unafordable residential and workspace developments being funded through more borrowing. How much is the Council currently expected to be borrowing in the current cycle, isn't it around a billion?

Do we trust our Council to get things right, probably not. The recent debarcle relating to the difference between Social and LAR rents by Mr Lunt, the current massive over provision of Primary School places that were sanctioned even though the Mayor's predictions showed a falling school role in Primary Education and projected to continue for many years, then of course the waste of at least £18 mn on Granville NH. The list goes on, just like the Council's very expensive PR machine (remember the massive TV advertising screens in the Civic).