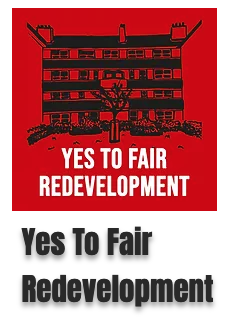 With the current controversy over Brent Council's infill proposals for our council estates I thought residents and readers would be interested in this Southwark campaign by Yes to Fair Development.  Building extra storeys on existing blocks has featured as a possibility in this borough as well.

The group has pledged to continue the fight to stop unfair infill proposals which threaten to make residents’ lives a misery for years to come, removing tenant halls, play space and green space from estates, replacing it with housing.

After the worst heatwave on record, with temperatures above 40 Degrees, residents point out the vital role played by green space and trees in keeping their homes cool. A BBC heat map shows that the hottest areas in Southwark are Peckham, North Southwark and Bermondsey, whereas leafy Dulwich stays cooler than average.

Yes to Fair Redevelopment says the Council should take over empty homes and repair existing council homes rather than demolish them. The group is dismayed by the Council’s stance which seems to link major works and repairs to infill development, making residents believe they can’t have one without the other. Now that the rooftop development is cancelled, the repairs must still go ahead.

Some damaging schemes remain, including the demolition of people's homes and the removal of green space and trees at the Dodson and Amigo Estate and the destruction of a play area at the Elim Estate. Residents are fighting these proposals and they deserve everyone's support. Some schemes, such as the Vauban and Brenchley Gardens have been indefinitely suspended, showing that if you fight, you can win.

We are in favour of council housing, and we’ve been fighting to defend it from Southwark’s demolitions and sell-offs for the past 20 years. The infill policy is a sign of the failure of Southwark’s housing policy, not a sign of success. We all need to get behind the campaigns to put residents at the heart of housing policy, where democracy matters and that includes our right to have a say over what happens on our estates, our green spaces and our community facilities.

Residents have fought hard to raise awareness of the safety and wellbeing impact of rooftop builds and are hugely relieved the council has made the right decision. It has been exhausting to live with this hanging over our heads. A weight has been lifted.

George Anthony, Southampton Way Estate said:
Southampton Way Estate was targeted as part of the rooftop development scheme, something that was completely designed and funded before residents were made aware of such plans or even considered. It felt like this was a project that would happen no matter what the residents opinions were! We fought hard and even made contact with the media. The whole idea was ludicrous from the beginning! As a community we came together to express this by means of visible banners that went up around our estate. They may have infill plans ahead for Southampton Way, like when they proposed to build on our green. This is just frightening and although this battle may be won the war is still on and I for one will not be giving up the fight!