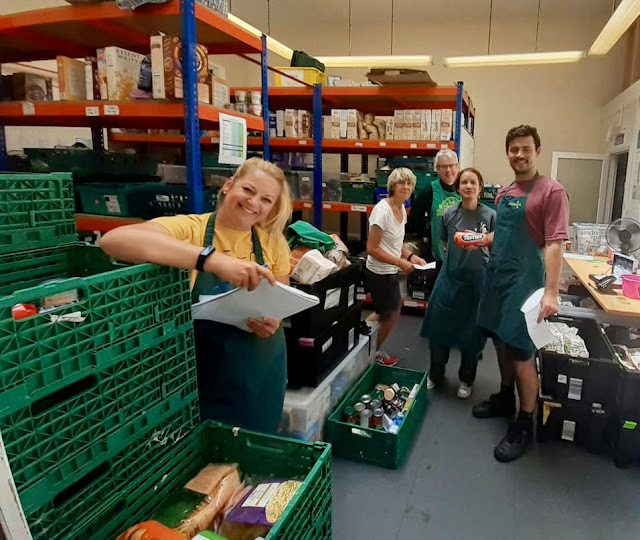 Earlier this year in March I was one of many crowded into Cardinal Newman College in Harlesden for a Right to Food summit bringing together politicians, experts, the people who run food banks and especially the public  to discuss ways of tackling food poverty in the borough.There was recognition of the tremendous work done by volunteers during Covid to make sure no-one went hungry and food was delivered in safe conditions. 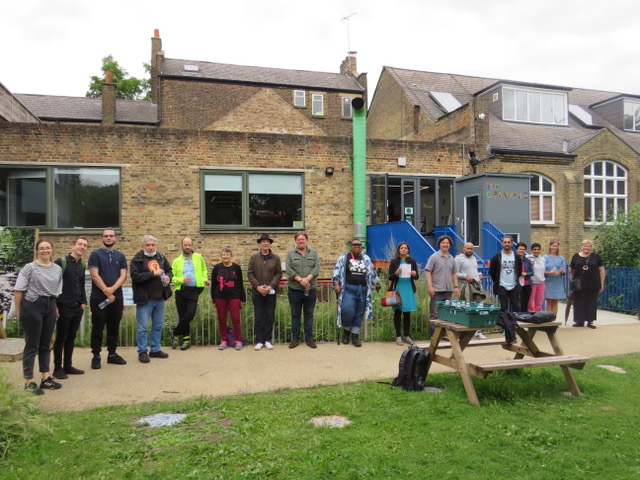 The launch at the Granville Community Kitchen and Garden

The campaign goes back even earlier to July 2021 when it was launched at the Granville in South Kilburn, Alex Colás, acting co-convenor of the Brent Right to Food campaign, said them :

Food poverty is the result of structural injustices connected to health, housing, employment and wider social inequalities. It needs systemic solutions that empower communities with public resources, including land, retail space and procurement directed toward a more just and sustainable local food system.

Beyond the immediate demands of Covid,at the summit, he food banks in particular were keen that the need for them should not be normalised and that the deeper reasons for food poverty should be tackled. The 'sticking plaster' approach was near breaking point and anyway, not the answer.

The summit wa organised by Alex  Colás and a young Labour Party member Ryan Hack. Ryan was elected a councillor in  May and at Full Council this week lost no time in gaining  Liberal Democrat[s leader Anton Georgiou support for a Food Justice Strategy for Brent just a year after the launch. An excellent example of cross-party working.:

A Food Justice Strategy for Brent

We are seeing a national food poverty emergency borne out of political choices and systemic failings from successive governments since austerity began in 2010. Recent Food Foundation data has recorded 7.3 million adults and 2.6 million children in UK households going without food or physically unable to get food in the past month

a) Food poverty should never be seen as inevitable: from 1997 to 2010 poverty reduced significantly (1), can be tackled.
b) The UK is in the midst of an economic recession, compounded by a cost-of-living crisis as energy bills soar, and the end of the £20 uplift to benefit payments. Food aid organisations are already far busier than before the pandemic, and they are braced for a steep rise in demand in the months ahead.
c) The result is an increasingly institutionalised food aid infrastructure, effectively now part of the welfare system. This system is subsidised by the public to the tune of hundreds of thousands of pounds in Brent alone. Food aid organisations
act as a critical safety net for anyone unable to make ends meet – including those receiving all the benefits they are entitled to and many who are in work and still experiencing crisis.
d) The long-delayed Government Food Strategy was lauded as the plan to help address this growing crisis. It was supposed to lay out a vision for how we create, enhance, and protect sustainable food supplies. However, even the government’s own lead advisor Henry Dimbleby, whose review of Britain’s food system formed the basis for the document, said the White Paper did not amount to a strategy and could mean even more children going hungry.
e) The pandemic disproportionately impacted Black and racially minoritized communities in Brent. It underscored the injustice of food poverty for thousands of residents across the borough who were dependent on food banks and other forms of charitable food aid (including food parcels and vouchers from the council) for their day-to-day survival. As a result of the Covid-19 pandemic, there is a mushrooming of newly established food banks, and other forms of food support for vulnerable people provided by mutual aid groups, businesses and faith groups many of which still remain active.
f) Brent Labour stood on a local election manifesto to develop a ‘Right to Food’ pledge to confront spiralling food poverty by bringing together existing food aid organisations, growers, and other stakeholders to address rampant inequalities in accessing affordable, culturally appropriate, nutritious food in Brent.
g) A Brent Right to Food Summit was held in March 2022 at Cardinal Newman Catholic College with the participation of multiple Borough stakeholders, including Sufra NW London, Granville Community Kitchen, Brent Growers and Brent CVS. The Summit clearly reflected widespread concern over the urgency
of tackling the ongoing food emergency, both nationally and locally in Brent.

Full Council also notes the work that is already being done to address food insecurity across Bent, including:

a) The appointment of Brent Council’s Food Justice Cabinet Champion.
b) The commitment in Brent Council’s recent Health and Wellbeing Strategy to ‘work with partners on a food strategy’ for our Borough.
c) The identification in the Health and Wellbeing Strategy of potentially positive food-related initiatives, ranging from healthier catering commitment to rolling out Incredible Edible schemes; diabetes prevention programmes, and guaranteeing a fair job for a fair wage across the food sector.
d) The publication in July 2020 of the Brent Poverty Commission’s Report which included sections on food poverty, recommending that the Council ‘supports the future sustainability of food aid agencies in the borough including by further developing community garden schemes’.
e) The continuing efforts by local mutual aid groups, the Brent Food Aid Network, Growing Brent, among countless others to mitigate food insecurity across our Borough.
f) The celebration in March 2022 of a Brent Food Summit aimed at identifying the various solutions and coordinating effective responses to the food injustices in the Borough.

a) Declare Brent a Right to Food Borough, joining other local authorities across the country calling for the Right to Food to be enshrined into national law.
b) Request the inclusion within a Cabinet Member portfolio of responsibility for co- developing a Brent Food Justice Strategy with representatives of local food security stakeholders, aimed at addressing the structural causes of food poverty and inequality in Brent.
c) Strive toward a Brent without food banks, where food aid is drastically reduced to an emergency response to crises through ‘cash first’ solutions such as the scaling up of welfare advice services across the borough, as well as improved
access to welfare assistance grants, school meals and supermarket vouchers for anyone in need. We want an end to normalising emergency food aid as a routine form of addressing food insecurity.
d) Support existing food aid providers through the allocation of land and suitable premises to establish or improve access to urban agriculture, community food gardens, social supermarkets and community kitchens among other initiatives; and ensure market space is available – especially in or near areas of deprivation
– to distribute nutritious, affordable and culturally-appropriate food to local residents
e) Work towards a ‘Right to Food’ dimension when formulating policy so that food becomes part of the Council’s decision-making equation.

In his speech to Full Council, Cllr Hack said:

Last July, I launched the Brent Right to Food Campaign with a group of local activists who are mobilising against a food poverty crisis in Brent and the rest of the country, where children and nurses are using food banks in our borough.

This is a food poverty crisis which is entrenched in Tory austerity and predates the pandemic, which saw over 16,500 emergency food parcels be prepared by the Brent Food Bank for people seeking help last year.

Tonight with that same sense of optimism of bringing change to end child poverty in Brent, my party has pledged to work toward a Brent without food banks, and to call for the Right to Food to be enshrined into national law.

We will champion  a food justice strategy that supports the development of community gardens, social supermarkets and community kitchens for local residents.

Hunger is a result of political choices made by the Government, and I will never stop fighting for a society where every child has access to year-round universal school meals. It is in our hands to redress this unacceptable situation. With the powerful mandate handed to the Labour Party at the recent local elections, the first step in this long process will hopefully begin tonight when Brent declares itself a Right to Food Borough.