The site in context. Red rectangles are the development areas 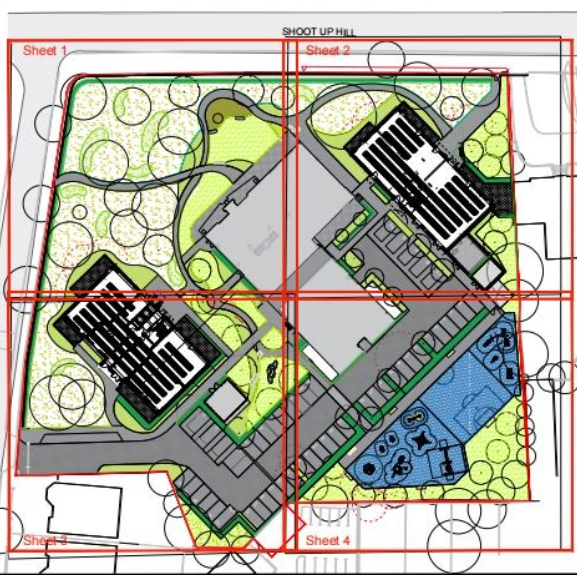 In your earlier article on controversies over Brent Council infill proposals, Common threads emerging as council tenants rebel over Brent's infill plans, you missed out Windmill Court on Shoot-Up Hill which is close to Watling Gardens.  We are one of the three in the Cooperation Agreement with Network Homes alongside Watling Gardens and Kilburn Square.

The Windmill Court application went before the planning committee on the same night as Watling Gardens.

One councillor objected to the application and one, Cllr Kennelly abstained on fire safety grounds (he’s no longer on the committee).

The head of planning, Mr Ansell, chose to ignore the legislative requirements under land use planning for fire safety and even directed the committee members that it was not a matter for them and could be dealt with at building control.(See video  below)

This is against the current fire safety requirements and a breach of the legislation on fire safety in high rise buildings that came into force on 1st August 2021.

The legislation, Planning Gateway One, came from the Dame Judith Hackett recommendations to ensure that fire safety and access is dealt with at the earliest possible stage.

Under Planning Gateway One Windmill Court tower block at 17 storeys with 120 households is a relevant building. The legislation requires a change in culture in that the existing building and the land around it has to be part of the planning process and taken into proper consideration regarding fire safety and access. This should be done at planning committee but Brent have clearly not incorporated the necessary change in culture to take proper account of the legislative requirements.

You would be aware that planning would usually have been concerned only with what was being proposed and not the existing buildings and residents. I am unsure whether they deliberately chose to overlook the legislation on a proposal where the design concept being put forward is fundamentally flawed.

I noticed you picked up on the sale of some of the properties at Watling Gardens. Under the Mayor’s affordable housing this does allow for shared ownership to be included under the banner of affordable housing.

Windmill Court is financially unviable to the tune of millions and we did notice in an early Cabinet document where they included us along with Watling Gardens in a mention about increasing sales!

Whilst this is all being done under the banner of new council homes the chance is that they will be offloaded onto another housing organisation and a large number will be sold.

As for the affordable rent and local lettings policy. This is problematic for existing residents wanting to downsize or requiring a larger property. The council quite recently produced a document showing council rent’s for all sizes of homes with regards this year’s increase of 4.1%.

When you compare this to the Mayors affordable housing rent benchmarks and include the service charge the differences are quite stark. Someone downsizing from a two bedroom property to a one bedroom property would be paying an extra £60 per week. Someone here at Windmill Court in a one bedroom flat with a child or children requiring a two bedroom flat would have an increase above an extra £60 a week and would lose having a separate kitchen and lounge. The option to consider staying in their one bedroom property with a kitchen that is large enough for a table and chairs and utilising the lounge as the parental bedroom would save them over £60 per week.

This is creating a two tier system on Brent estates where existing residents are having amenities removed to allow for new residents at higher rents being given what was previously shared communal space as private outdoor space as per GLA requirements.

The submitted fire statement contains erroneous information and this has to be the most concerning.

Our committee members have been researching every area including the council submitting the Lambeth Methodology Survey on available alternative parking spaces which includes 37 spaces on the A5 Shoot Up Hill that have 0% stress! That’s because they don’t exist! And listing CPZ’s in Camden as being available to Brent residents!

An anonymous consultant appears to have been paid  £43,340:00, mostly in £1,750:00 amounts, according to the Windmill Court submitted invoices.

I am attaching the video from the planning committee where fire safety is discussed. The first part with Mr Ansell explaining the change in legislation and stating this is a genuine serious concern then proceeding to direct members that it’s not a matter for them which is advice that is against the law. The second is Clr Kennelly expressing dissatisfaction with the reply and suggesting deferral of the application.

The training exercise at Hereford House ? The type of access required is very clear on there.

Yes that’s right Hereford House 😊 Sadly we had a fatal fire here at Windmill Court in January 2019 🙏 The London Fire Brigade (LFB) attended very quickly and were able to access the 17 storey building using a high reach or aerial appliance to contain and put out what was a very intense fire.
All our existing emergency space has been designed out having been viewed as “exciting” for “maximising opportunities” under the GLA requirements and Mayors’ London Plan.
The LFB Firefighting in high-rise residential buildings has a Pre-Determined Attendance that includes one Aerial Appliance but they won’t be able to get to us.

Brent Council's Cabinet will surely be found responsible for any deaths in high rise fires if fire appliances cannot access due to infill properties or the new buildings are fire hazards as was Grenfell, let alone ovens they and their concrete surroundings create in this heat and even cooler conditions. Perhaps Cllr Inept Nerva could consider the health implications of the "urban heat islands" being created by the, cough, regeneration and 3G installations creating widlife deserts across Brent creating yet more health inequalities.

The Grenfell deaths were because inappropriate (usless) Building Regulations were used, yet Brent Council under Cllr Butt and his coterie continue to push for more and more Tatler Towerblocks ably assisted by Chair of Planning (don't give a toss Kelcher, any old box will do, and no, I only pretend to be a Tory) under these inappropriate Building Regulations even after some recent twiddling around the edges. The irony and hubris is deafening.

This will be on you Brent Councillors.

'Kensington and Chelsea Council was warned as early as 2010 that building a new secondary school at the base of Grenfell Tower could block emergency vehicles' access, the BBC has learned.'

'Plans to build a new academy school at the foot of Grenfell Tower were opposed by many residents, who felt the area was already congested.

An email sent in 2010 to councillors by local resident Francis O'Connor, a member of the Grenfell Action Group, said the plans meant emergency access to Grenfell Tower would "certainly be compromised".

As the proposed development is high-rise, the proposal now goes to the Health & Safety Executive for 'Gateway 2'. They should be all over this one.