Bust of Charlie Watts of Wembley presented to Brent Council. Where should it be displayed? 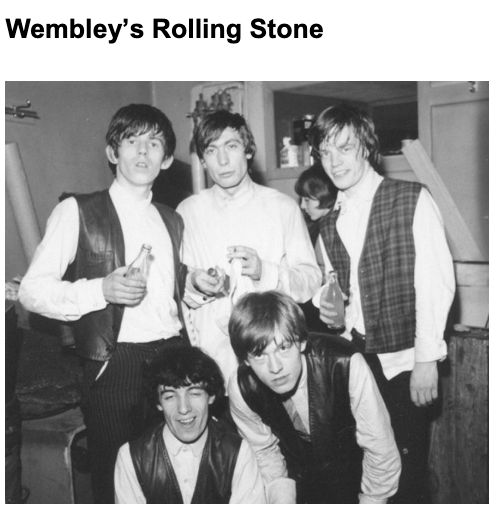 Charlie Watts lived in a prefab in Pilgrims Way, on the edge of Fryent Country Park, and local legend says his mother bundled him off to fields behind the estate to practise on his drums. The prefabs  were demolished to make way for the present estate on which I live so there is no obvious house for a blue plaque - but one is richly reserved.  Philip Grant has written about Charlie's Wembley connections HERE.

The bronze bust of Charlies Watts

Meanwhile Brent Council has received a bust of Charlie and is looking for a suitable home:

Charlie Watts mega-fans presented a bronze bust of the late Rolling Stones drummer to Brent Council on Friday 1 July.Stones icon Charlie Watts grew up in Wembley and was fondly known as the “Wembley Whammer”. After he passed away in August 2021, fans thought it fitting to honour him in his hometown.

Sculpted by artist Sissy Piana, the bust was donated to Brent Council at a small ceremony attended by The Mayor of Brent, former Mayor of Brent Lia Colacicco, Founder of the Rolling Stones fansite SHIDOBEE with STONESDOUG, Doug Potash and organiser and commissioner of the artwork, Richard Jozefiak.

We are delighted to be entrusted with this wonderful sculpture that pays homage to iconic drummer Charlie Watts. Rolling Stones fans across the world, have worked tirelessly to pay their respects and we at Brent Council are pleased to play our part in honouring his legacy.

The Rolling Stones have strong roots in Brent, with Watts growing up in Wembley and the Rolling Stones performing in Wembley as far back as 1982. This bronze bust acts as another addition to the deep cultural impact the band has had in Brent as well as the rich musical history of our borough.

With Charlie Watts gone, many of our members wanted to find a way that we could honour him. I was approached by SHIDOOB Richard Jozefiak with an idea; he had contacted sculptor Sissy Piana about creating a bronze bust of Charlie and proposed that we raise the funds and find the proper place for it to be displayed.

When I announced this, donations immediately poured in and everyone was thrilled that they were part of having this bust of the Wembley Whammer created and given a place for it to be honoured thanks to the Brent Council.

Discussion are underway about where to display the bronze bust.

There are a number of places associated with Charlie Watts in the Wembley and Kingsbury area, where he grew up and went to school.

Pilgrims Way where he lived from 1947 until late 1963 would be the most appropriate, even though the prefabs have gone.

The Watts family moved to a Council house in Holly Grove around late 1963, and it was from that home that Charlie got married in 1964.

Charlie went to school at Fryent Juniors in Church Road, and was one of the first pupils at Tylers Croft Boys Secondary in 1952 (now the Lower School site for Kingsbury High School, on the north side of Roe Green Park).

Or perhaps one of the pubs where he played early gigs as drummer for the Jo Jones Seven in the late 1950s - does anyone remember where they were the regular jazz band? If so, please add a comment below.

The above suggestions are great, especially Pilgrims Way, but I fear the bust will get stolen there. There are so many opportunist thieves who will want to sell the bronze. So, I believe it needs to be someplace with good security. Perhaps it will be safest near Wembley Stadium

I did send my comments to the Mayor (Cllr. Abdi Aden), and he has written to thank me for them. So if any readers have suggestions for a suitable location, don't be afraid to share them with him - email: mayor@brent.gov.uk

I also recognised that security for the bronze bust would be a concern, so suggested Brent put a Charlie Watts plaque at Pilgrims Way as an alternative, with the following thoughts on a more secure location:

'However, it may be that, for the security of the bust (from theft or vandalism) a location within or close to Brent Civic Centre might be best. This is certainly the sort of location where the bust (and hopefully an information panel telling of his local heritage) is likely to be seen by more people.

Inside the Civic Centre, a location in the atrium, close to the entrance to Wembley Library might be best. When the original plans for the Civic Centre were being discussed, in 2005, there was meant to be a small museum display section next to the library (this was when Brent Museum was in the process of moving from The Grange in Neasden to Willesden Green Library, and it was thought that there should be a museum "presence" at the Civic Centre in Wembley).

Outside, I think that the best location, if the bust can be securely attached to a plinth, would be either in Arena Square, opposite the Civic Centre, or at the edge of the market square, to the east of the side entrance to Wembley Library, and close to the small performance stage area, where it could be an inspiration to local musicians, as well as being seen by thousands of passers-by on their way to the Arena, Civic Centre or LDO.'

I received a suggestion that the pub where Charlie Watts was playing drums in the late 1950s photo might be "The Windermere" in South Kenton. It has a window very similar to that in the picture, at one side of its stage.

However, I've now found out, from a piece written after Charlie's death by Dave Green (the double bass player in the photo) that their weekly booking, as part of the Jo Jones Seven in 1959, was at "The Masons Arms" in Edgware.

Dave and Charlie grew up together, as next door neighbours in the Pilgrims Way prefabs, at numbers 22 and 23 respectively. They remained good friends, and played together again in Charlie's jazz band from the 1980s onwards.