Get Ready for the Women’s Euros Football Final! 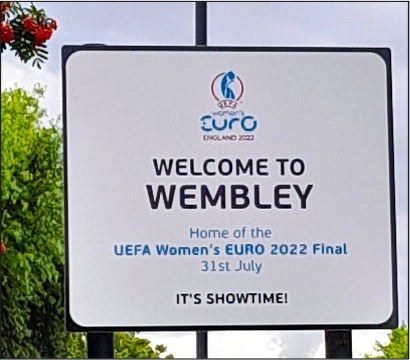 In a post about the Brent Culture Service programme of events for the UEFA Women’s Euros football tournament last month, I wrote this about the England team: ‘Can the “Lionesses” go one better than the England Men’s “Three Lions” team at Wembley last year? We will see!’

Well, after their excellent performances so far, especially their 4-0 win against Sweden in the semi-final on Tuesday evening, England’s “Lionesses” will be playing in the Final at Wembley Stadium on Sunday, so we will see.

The England Women’s football squad after their semi-final win in Sheffield. (Image from the internet)

There are still some local events in conjunction with the Women’s Euros that you can enjoy, so here are some details:-

“Stadium for the Future: If I can't dance I don't want to be part of your revolution” will still take place on Friday 29 July, but some details have been changed since those I used in my June article. This music and dance party for women will now be at the Jason Roberts Foundation, in the Pavilion at Stonebridge Recreation Ground, Hillside, NW10 8LW, from 6pm to 9pm. The event is free, but booking is essential, so for more details and tickets please “click” on this Eventbrite link.

“Bend it Like Beckham, Be A Lioness!!”, an event for families with children, will be holding its final session on the wide section of pavement near Nando’s on Saturday afternoon, 30 July from 1pm to 5pm. The fun activities will include the chance to take a penalty kick in a football shoot-out with a controlled AI simulator, watch exclusive female football freestylers and take selfies with a lioness mascot! 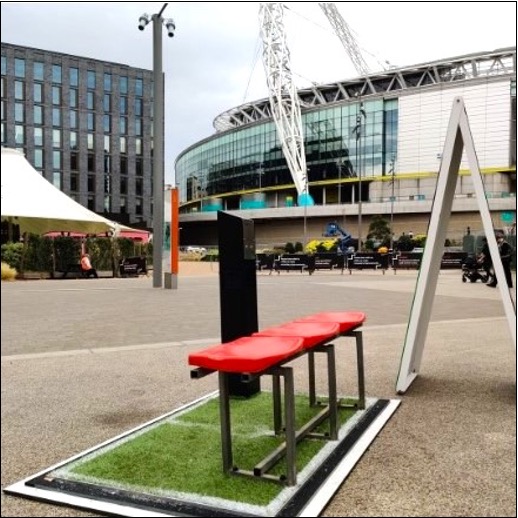 “One two, one two” at Wembley Park Boulevard.

“One two, one two” is a Brent Museum and Archives outdoor heritage installation, where you can sit and hear inspirational stories from some of Brent’s women footballers of the past and present. This has been running throughout the Euros tournament at The Events Pad on Wembley Park Boulevard, near the western end of the stadium. There is also an outdoor exhibition showcasing the history of women’s football at White Horse Square, near Wembley Stadium Station. Both of these will continue until 30 July.

Also happening on Saturday 30 July, at Olympic Way from 12noon until 5pm is “The Supercompensation Cycle”. This is a holographic movement installation by visual artist Emma Smith, and will be accompanied by dancers who’ll invite the public to take part in a flash mob, doing the movements used by footballers as they warm-up for a match.

On Sunday 31 July, the day of the match itself, the tournament organisers are hoping that there will be a fan march from Fryent Way to Wembley Stadium. As Martin has revealed, Brent Council have arranged for a rolling road closure to facilitate this, and they hope it will be ‘a fun and colourful pageant ahead of an important sporting event.’ At present, its unsure whether this event will actually happen, as the main countries who have a tradition of fan marches to their football games, The Netherlands and Sweden, have both been knocked out of the Euros. 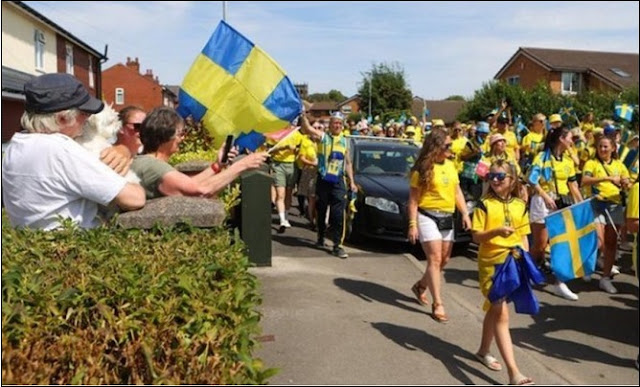 Swedish football fans marching to one of their women’s group games in Leigh. (Image from the internet)

Whether or not England fans march to the stadium (in friendly company with their French or German rivals) on Sunday, the tournament has been a great success. It has shown the high standard at which women now play football, and the enjoyment that playing “the beautiful game” at any level can provide. There should be no doubt now that girls of school age should be given the chance to play football if they want to.

Girls are already playing football in Brent. They are enjoying it, and with good coaching they are playing it well. With the UEFA Women’s Euros Final in Wembley, I hope that some of our local girl players will have the chance to accompany the “Lionesses” onto the pitch on Sunday as team mascots. What an inspiration that would be for them, just as watching the way the England women have played in this tournament has inspired so many! 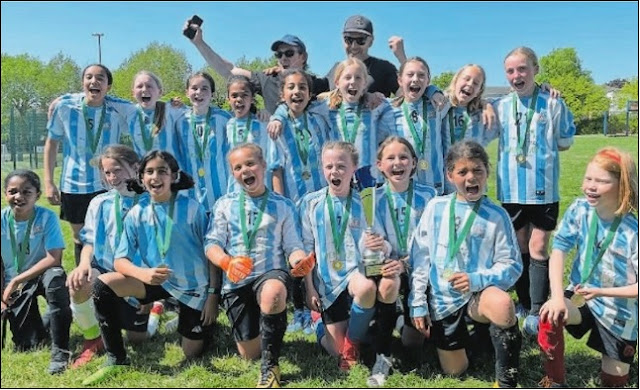 And finally, the Brent Museum and Archives “Women of the Match” exhibition, featuring photographs of Brent’s women of football by Roy Mehta, along with vintage photographs and football memorabilia, will continue to be on display at Brent Civic Centre until 6 November.

Whether you are lucky enough to be watching it at Wembley Stadium, or on television like me and millions of others, enjoy the UEFA Women’s Euros Final on Sunday.

There are 23 players in England's Euros squad, but only 22 in the photo used in my article above.

What is the name of the missing player (and extra points if you can give her shirt number, and the WSL club that she plays for)?

No takers for my quiz question? Never mind - I think the missing player from the photo was Fran Kirby (England squad number 14, but in the starting line-up for every game), whose WSL team is Chelsea.

I said "we will see" if the Lionesses could go one better than the England men's team, and they certainly did. What a team, and what a great atmosphere before and at the match.

If the policing and planning had been better - such as no alcohol sales in local shops before the game and better trained stewards with better security the situation at the men's Euro Final would not have been as bad.

We left Olympic Way at 3pm before the men's Final as we could see it getting completely out of control - the authorities should have
predicted that at such a high profile match after the pandemic and planned better.