Many thanks to Philip Grant for this guest post 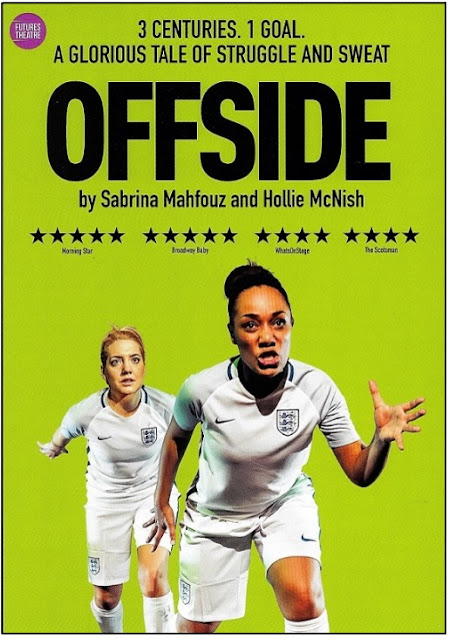 This July, the UEFA Women’s Euros football tournament is coming to Wembley, and Brent Culture Service is celebrating this with a number of special events. The season kicks off with a performance of the acclaimed drama “OFFSIDE”, at Willesden Green Library on Friday 17 June at 7.30pm. Tickets are £5 to £7, and can be booked here.

It’s a story about the struggle for women’s right to play football, and the challenges still faced by female players today. Futures Theatre, who are touring the play around the country ahead of the Euros, give this information about it:

Whilst each of them face very different obstacles, the possibility that the beautiful game will change their futures – and the world – is tantalisingly close.

Offside is told through lyrical dialogue, poetry, and punchy prose, placing the audience on the touchline of the game of a lifetime.’ 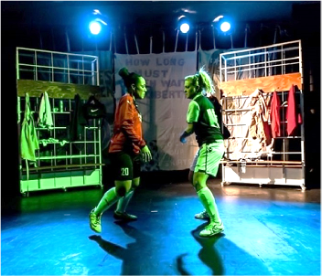 Scene from “Offside”, being performed in Edinburgh. (Photo by Lidia Crissafulli)

If you want to see this “one night only” performance in Brent, I’d suggest that you book your tickets now! But there are plenty of other events celebrating women’s football, for all the family and most of them free, taking place over the next two months.

The Women’s Euros tournament begins on 6 July, with England playing their opening group match at Old Trafford in Manchester. Just over 50 years ago, that would not have been possible. The Football Association (“FA”) was run for men, by men who believed that football was not a suitable game for “the fair sex”. For decades it had banned all of its member clubs from allowing women to play football on their pitches!

Things began to change when 44 women’s teams from across the UK met in 1969 to set up the Women’s Football Association of Great Britain (“WFA”). By the 1970/71 season they held their first Cup competition, the Mitre Challenge Trophy. This has gone on to be the Women’s FA Cup, and Brent is celebrating with a free coffee morning talk, at Kilburn Library, on Wednesday 6 July from 11am-12noon: “A History of the Women’s FA Cup Final – 50 Years, Gone in a Flash.” (Please see details and register your interest on Eventbrite). 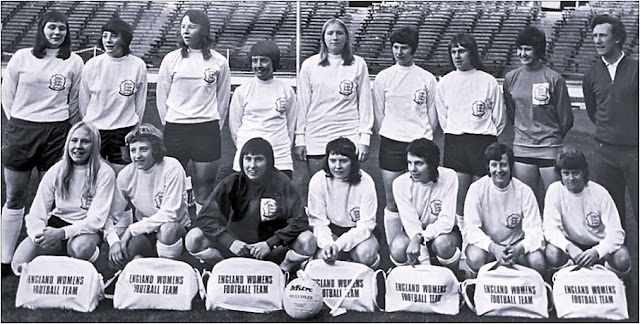 Brent could not have found a better speaker, to guide her audience through the development of the women’s game since the 1960s, than Patricia Gregory. She was Secretary of the WFA from 1972 to 1982, and saw an official England Women’s team play a first international match against Scotland in 1972 (a full century after the first men’s international between the two old rivals). The WFA carried on until 1993, when control of women’s football in England passed to the FA.

Wednesday 6 July also sees the start of a Brent Museum and Archives programme of talks at Wembley Stadium, which carries on until Saturday 30 July. “One two, one two” will give Brent residents the chance to hear inspirational stories about women’s football history from some of our local football heroes. Look out for more details online, or at Brent Libraries!

You can also see portraits of Brent’s Female Football Stars, specially commissioned from local photographer Roy Mehta, in an exhibition at Brent Civic Centre, which runs from 18 June until 6 November. The “Women of the Match” exhibition, prepared by Brent Museum and Archives, will also include vintage photographs and football memorabilia. 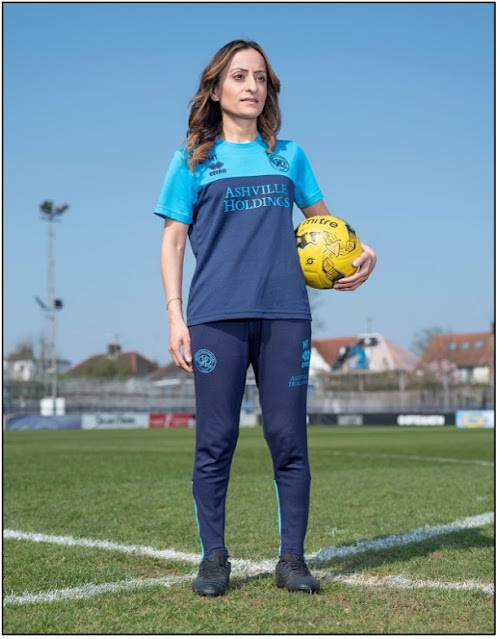 One of the football stars featured in the exhibition is Manisha Tailor MBE. She is a coach for the Academy players at Queens Park Rangers F.C., and the first South Asian woman to hold a coaching role at a men’s Football League club. One of the women who inspired her was Rachel Yankey (who I wrote about in my “Football IS Coming Home” article last summer). After having to pretend to be a boy, so she could play for a football team, while at Malorees Primary School in the 1980s, she had a long and distinguished career as a player, then went on to earn her coaching badges. 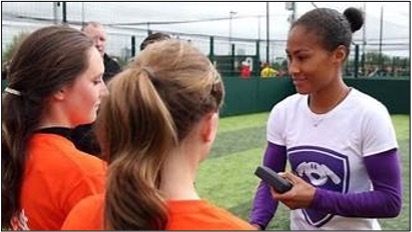 Rachel Yankey, in a football coaching role. (Image from the internet)

Wembley High Road will see events to help all the family to get into the UEFA Women’s Euros spirit, during the tournament. “Bend it Like Beckham, Be A Lioness!!” will take place on the wide section of pavement near Nando’s on a number of afternoons from 1-5pm. The fun activities will include the chance to take a penalty kick in a football shoot-out with a controlled AI simulator, watch exclusive female football freestylers and take selfies with a lioness mascot!

Although the 1923 FA Cup final was first played at the Stadium in 1923, Wembley hasn’t always been the home of women’s football. The “Lionesses” didn’t play their first international match here until November 2014, and the first Women’s FA Cup final at Wembley was in 2015. That attracted a crowd of around 30,000, which had risen to nearly 50,000 for the May 2022 final. It will be a “full house” at Wembley Stadium for the UEFA Women’s Euros final on 31 July, and in the build up to that Brent Culture Service is staging two big events.

“A Stadium Of The Future -  If I can't dance , I don't want to be part of your revolution”, on Friday 29 July, from 2-8pm at Bridge Park Leisure Centre, promises a unique event for women combining music, dancing, activism, food and celebration. The group “Idle Women” will be collaborating with women in Brent, and say: ‘It’s about women taking up space and making visible their essential role in solving the social and environmental challenges with face locally and globally.’

On the eve of the final itself, Saturday 30 July from noon until 5pm, everyone is invited to Olympic Way for “Emma Smith's Supercompensation Cycle installation and dance performance”, along with the Royal Philharmonic Orchestra and local musicians performing the 'Brent Anthem'. This will celebrate the arrival of the 2022 UEFA Women’s Euros at Wembley. 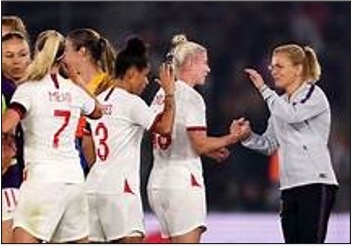 England Women’s manager Sarina Wiegman congratulating some of her players after an Arnold Clark Trophy match earlier this year. (Image from the internet)

The excitement will be even greater if England are one of the teams taking part in the final. England Manager Sarina Wiegman (who won the previous Women’s Euros tournament with The Netherlands) has got an excellent squad, which has been playing well and won the Arnold Clark Trophy international tournament earlier this year. Can the “Lionesses” go one better than the England Men’s “Three Lions” team at Wembley last year?

We will see! And as well as following the UEFA Women’s Euros championship, I hope that you can enjoy some of the Brent Culture Service events being held along the way to 31 July.