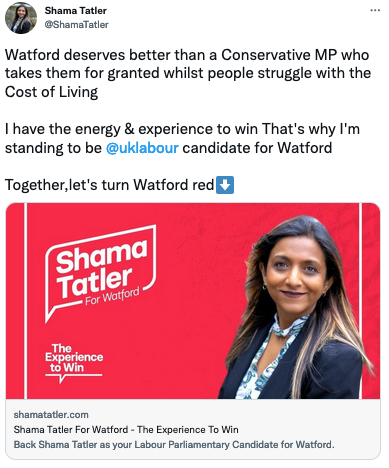 As mentioned by Wembley Matters on May 1st LINK Shama Tatler has her eyes on becoming Labour's parliamentary candidate for Watford and so did not stand for the deputy leader of Brent Council's Labour Group.

Today she launched her campaign for the nomination  on twitter with links to a pretty slick campaign website LINK and announced backers including David Lammy MP.

She will find herself in the strange situation where she will be standing for a local Labour Party that has campaigned against the Liberal Democrat Watford Mayor on the basis of the building of tower blocks in the area. They even call them 'Taylor's Towers'.  In Brent of course in her role as Lead Member for Regeneration Shama Tatler has strongly supported the building of tower blocks in Alperton, Wembley, Stonebridge and South Kilburn earning herself the nickname  'Towerblock Tatler.'

These are examples of the Labour campaign in Watford: 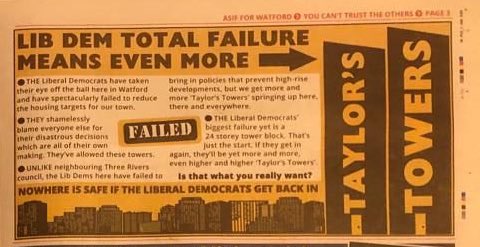 The image is hard to read so this is it says:

IS THAT WHAT YOU REALLY WANT?

You can have some fun substituting Labour for Liberal Democrats, and Brent for Watford and Tatler's Towers for Taylor's Towers and see if it makes sense. It will be an interesting selection meeting.  Perhaps they should invite Peter Taylor to be a guest panellist? 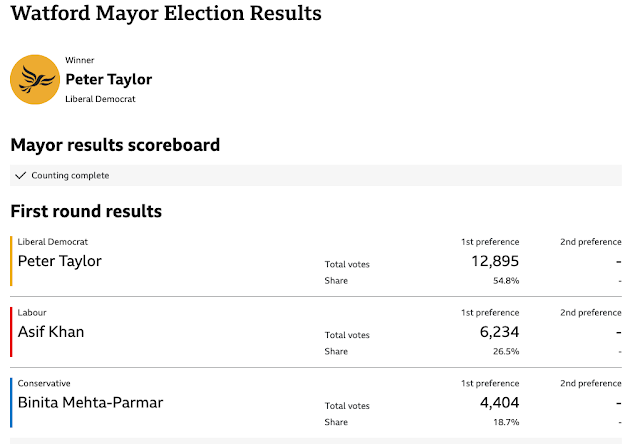 On her website Cllr Tatler highlights her 6 years' experience as Cabinet member for Regeneration, Property and Planning and includes an image of South Kilburn but not any tower blocks... Wow…. Now I get her Twitter spat with the Brent LibDem councillor. It takes a special talent to be a pro development councillor and run as a NIMBY parliamentary candidate.

You can hardly create housing in inner London boroughs without going high. Outside London, you can.

Since when has Brent been an INNER London Borough?

Those were the boroughs within the pre-1965 London County Council, whose schools were then taken over by the GLC's Inner London Education Authority.

Imagine volunteering to be a loser in such a high profile location. She is the wrong person to take on Boris. They need someone with a profile.

It's so funny, Towerblock Tatler isn't well liked by Brent's Labour Councillors, 6 years ago she stood for election as a Cabinet Member and only gained 12 votes out of 60. She was then put in place after Cllr Butt changed the rules so he could select the cabinet members. It is understood that she didn't stand for Deputy Leader last month as she knew she would lose badly.

The fact she thinks south kilburn is a selling point… it’s an unmitigated disaster. If I was running the Tory candidate I would highlight a south kilburn scandal every few days

The High Rise approach to dealing with shortage of housing was tried once before in Brent. In the 1960s bulldozers were sent in to demolish street after street of traditional housing and to replace them with the Bison Wall frame towers in Stonebridge and Chalkhill. It was a disaster.

Years later Labour Councillors introduced a 'no children above 5th floor' policy, then spent tens of millions of pounds to close of walkways on the crime ridden Estates and then demanded their demolition.

Now we have Labour Councillors allowing the building of 30 storey tower blocks in Brent. The Council buying up flats in those blocks and placing families with children above the 5th floor.

In a classic gesture politics style the Labour Councillors declare a 'Climate Emergency' and ignore the report which proves that blocks of 6 storeys or more are twice as energy inefficient than blocks of under 6 storeys.

Promises of regeneration benefits are slow to come as residents have to live on a building site with all the noise and air pollution for 10 years or more before all the building work is completed.

And all because Brent is an easy target with the Government and Mayor of London sets the Council unrealistic targets for building homes for the whole of London.

Cllr Tatler's double standards have been exposed by her 'friends' (anonymous and otherwise) in the Labour Group. While this is entertaining we should not ignore the serious issue.

The time has come for a serious debate on the environmental damage that all the Tower Blocks and the excessive building targets are doing to Brent and the quality of life for local people.

Did anyone notice on social media that Cllr Robert Johnson has been (self) appointed as the voice of all Labour Party members in Brent? It sort of shows why Cllr Butt has relegated him to the naughty step at the rear of the back benchers I suppose.

Cllr. M Butt doesn't make many good decisions in Brent, however, putting our Cllr Robert Johnson in a corner is not a bad decision.

Labour going to keep the Conservatives in power after the next election if they put up candidates like Tatler.

South Kilburn is outer London as it is Brent and Brent is catagorised as being outer London.

However, South of Kilburn is the only part of outer London which is located in Central inner London spatially, hence the reason why removal of its entire natural 'rain garden' flood defence parks infrastructure by development-led/ Brent Local Flood Authority is a UK significant flooding risk escalation liability.