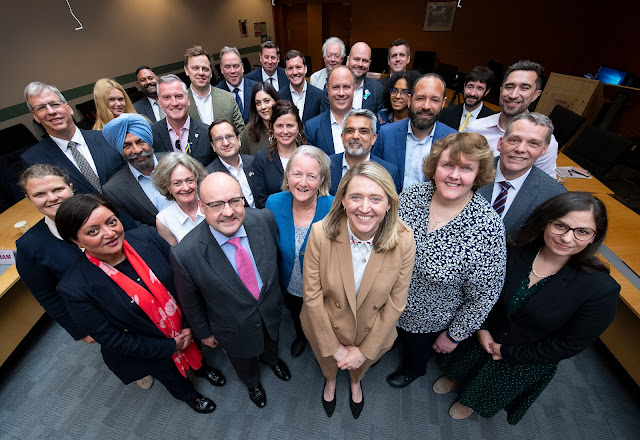 There's a bit of a spat going on via Twitter this morning after Labour's Cllr Shama Tatler criticised Lib Dem Cllr Anton Georgiou for meeting with Tory Cllr Sunita for what Georgiou described as an attempt  'find ways to work together to improve our communities' despite being on 'different teams'. 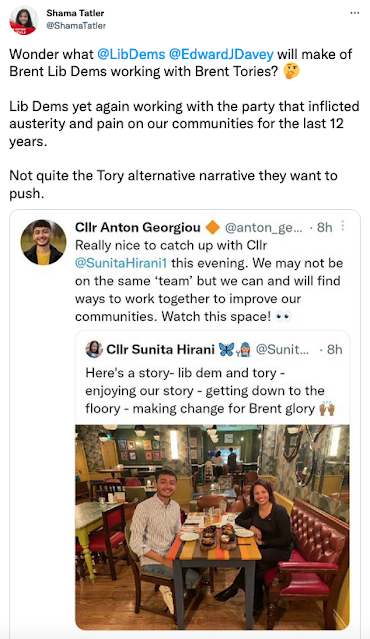 The concept was clearly anathema to Cllr Tatler but the reality is that on many councils and similar bodies different political parties have worked together for the benefit of the community. London Councils is one such body bringing together mayors and council leaders from different parties across London.  Indeed, until yesterday's AGM, Cllr Muhammed Butt, Leader of Brent Council was the London Councils Executive Member for Welfare, Empowerment and Inclusion.

Cllr Georgia Gould has been re-elected Chair of London Councils, promising to deliver on the boroughs’ shared agenda at this “important moment” for the capital.

At London Councils’ Leaders Committee AGM, held  yesterday borough Leaders and Directly Elected Mayors from across the 32 London boroughs and the City of London Corporation met to agree leadership roles.

The next few years present huge challenges for London - tackling inequality in our city, supporting residents and businesses through the cost-of-living crisis and ensuring London’s voice is part of debates on levelling up.

Having stepped up to support our communities during the pandemic despite incredibly difficult circumstances for us all, London boroughs are committed to working together on our shared ambitions from tackling the climate crisis to supporting Londoners facing a cost-of-living crisis. Together we will make the case for London and make sure the voices of Londoners are heard.

I feel incredibly hopeful that at this important moment for our city, London boroughs will focus on delivering for communities across the capital.

The following Leaders and directly elected Mayors were elected to London Councils’ Executive:

I understand that Cllr. Shama Tatler (Labour, Fryent) lives in the Kenton Ward of Brent which I now represent as a newly elected Conservative Brent Councillor. Like me, I am sure she made use of our local Woodcock Park for recreation and helping her to maintain her fitness and mental well being during the pandemic and lockdowns. And like me, I am sure she appreciates the vital importance of maintaining and improving our green spaces, like Woodcock Park, in Brent, not just for all local residents to have safe outdoor spaces but also as a contributor to reducing Brent’s Carbon footprint and reaching Brent’s net zero carbon target by 2030. I am also sure, like me, she must have been appalled at the pollution of the Wealdstone Brook and the stench emanating from it over the past 4 months which has made it impossible at times to sit in our gardens. Cllr. Tatler is a senior Labour Councillor in Brent and I would like to ask her what she, and indeed Brent Council, have done to support my local constituents, including her, in Kenton, in cleaning up the Wealdstone Brook and what plans she and Brent Council have for maintaining the river which should be such a vital natural resource for all the residents of Brent?
Cllr. Sunita Hirani (Conservative, Kenton)

I'm all for genuine across borough boundary working.

Looks like the other councils have little respect for the skills of Brent's long standing council leader, our very own Cllr M Butt. Could it be anything to do with the way he runs Brent?

The Councillor should persuade Brent Climate Emergency declaring borough to engage and participate (though late in the day true) in the Independent Expert Groups London Flooding Review Inquiry, now at investigation stage 4.

Wealdstone Brook and River Brent clearly need to be lovingly kept open and visible, otherwise its the 'Rivers, What rivers?' all rivers hidden underground by developers option as in Brent Kilburn- BEST NOT TO.

Local Conservatives are always polite and friendly. Local Labour toxic as seen by this tweet. There is nothing wrong with minority parties alligning resources to challenge the majority party. More power to Cllr Anton for grown up politics.

Local councillors should all work together to get the best for their constiuents - let's see more of this rather than the arrogance amd entitlement shown by of Labour councillors because they are in the majority party in Brent!

I believe that much more of benefit to the people of Brent could be achieved if councillors from all political groups were prepared to speak to and listen to each other, rather than seeing the Council as some sort of battlefield, where only their "tribe" is right. Surely that is what respect, which the Members Code requires, should be about.

I wonder whether Cllr Tatler was put out because those two councillors, from different parties, were among the five who requested the call-in of a decision which she may have to try and justify at a Scrutiny Committee meeting on Thursday evening?

The hypocrisy of Cllr Tatler!

I attended the recent election hustings at Preston Park Primary school and heard that Brent Council forced through the demolition of Preston Library against widespread local opposition using a law introduced by Mrs. Thatcher to silence community involvement in local decisions. The Labour candidate agreed that this was what happened.

Cllr Tatler suggests that talking to your fellow residents of Brent is reprehensible if they are from another political party, but she has no qualms about using the tools of the party of ‘austerity and pain’ on both the residents of Preston ward, on the climate, and on the planet.

As another comment says here, she will be justifying climate abuse later this week at the scrutiny committee while being a leading member of the council which has a climate emergency declaration. Looks like the behaviour of Thatcher and the party of 'austerity and pain' to me.

There will not be a picture on Twitter of Cllr Tatler sitting with Mrs Thatcher but there might as well be as they appear to have the same approach and would have plenty to agree on regarding removing local communities from local decisions.

Surely the Councillors should be working together to improve the living standards of the people who voted them in. There does not seem to be any common sense approach in how to run public services. It seems it is all about power and not what is the correct thing to do. Morality has been thrown out of the window. Forget about power and winning and do what is the right thing.