Wembley Place in the High Road - beyond a joke!

New developments and regeneration in Wembley Park, Alperton and South Kilburn get a lot of attention but Wembley High Road is also being steadily redeveloped.  In this guest blog a local  resident looks at some disturbing issues in a new development on the High Road.

Perhaps whilst everyone is banging on about parking etc let’s look at Wembley High Road. Wembley Place was built by Henley Homes  the very same contractor that closed the High Road for months having pumped 25 metres of concrete into the sewer when piling) now operated by Genesis Notting Hill.  I believe they are responsible for the social housing (45) flats above Sainsbury's and shared ownership above Costa Coffee.  Not sure who operates the remainder which is private, block is at the back overlooking Copland Fields.

Since complaining that the gates were never open to the service areas when everyone and their mother is parking in Ecclestone Place opposite  to facilitate their deliveries, it would now appear that said gate is now broken and hasn't been closed for months. 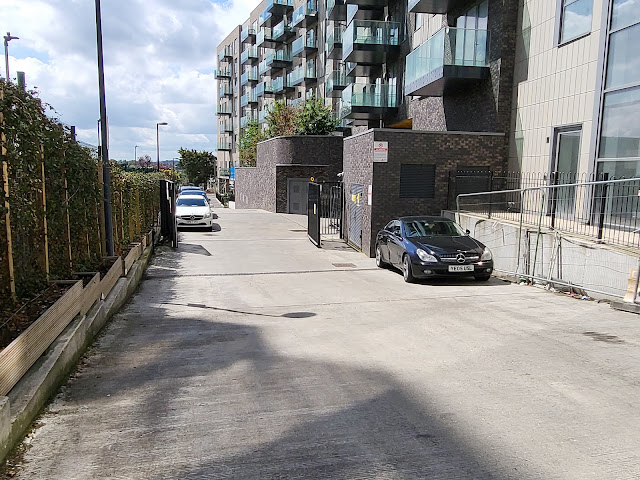 This results in a theoretical "Car Free Development" where the  majority of residents who own cars are now freely parking along the service road.  I counted approximately 18 vehicles when I took the photographs for this article. 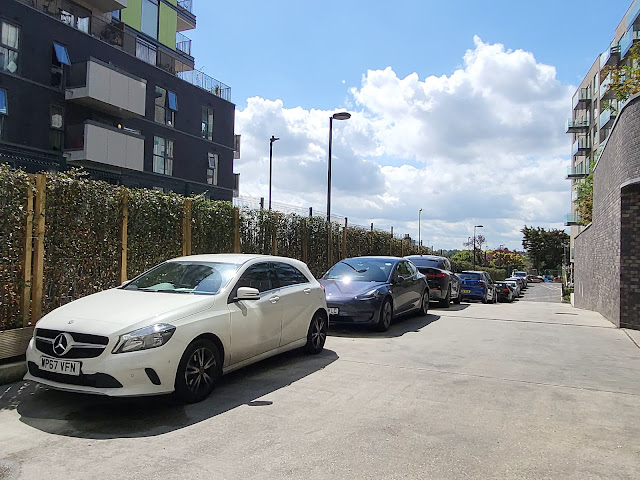 When I saw people moving I asked if they were residents – the answer was,  “Yes, the gate doesn't work and it's easy to park here without any problem.” 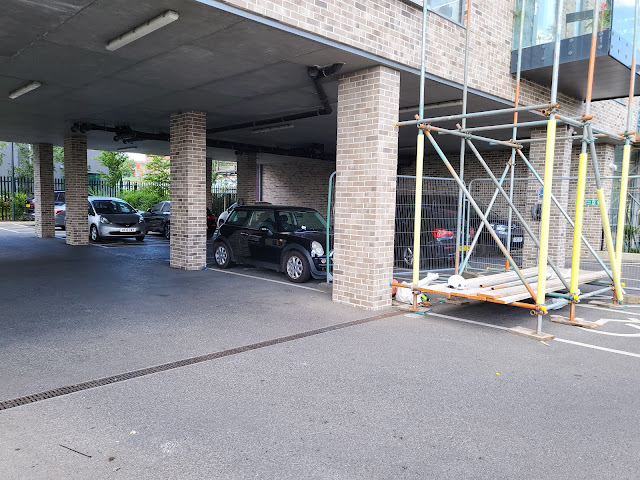 I also noted that the disabled bays of which there are 20 were also nearly full, and have it on good authority from a resident of the private block which is above it that only about 4/5 have permits and it is rumoured some residents are using their relatives and friends to gain a space.  This area has now been reduced due to scaffolding, which brings me on to my next item. 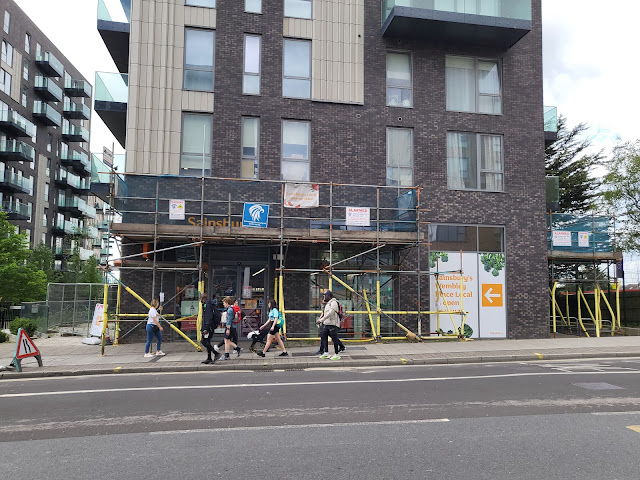 Since shortly after completion in Easter of 2020 and the retail units being fitted out and leased to Costa and Sainsburys, scaffolding went up around the ground level of all the three blocks.  You will note it's under every section where there are greyish oblong bricks.

Now from when it went up, well over 18 months ago, nobody has been seen working on it.  The only person I have spoken to is the guy that comes and puts up the permits and checks the security of it.  I asked the scaffolders as to what is happening and they informed me that these bricks/cladding has been installed incorrectly and there is fear that they may fall off and injure someone.  As the scaffolding is at low level there does not seem to be anyone in a rush to repair it/remove/remedy the situation. 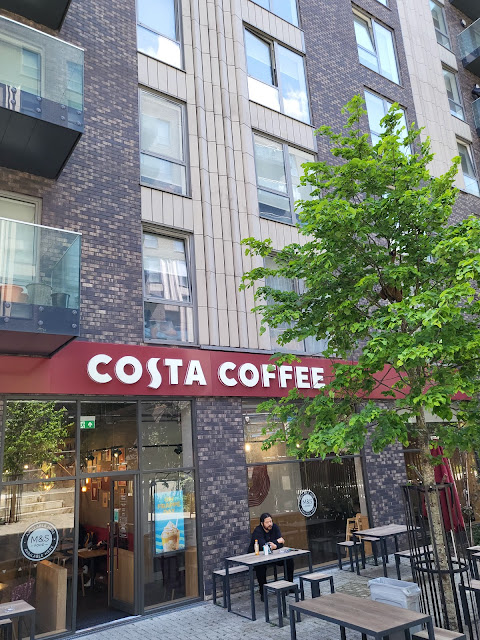 But the best joke is, outside Costa on the area where they have installed seating on the "Piazza" adjacent to where our "Water Feature" was supposed to be installed but never happened.  There is no scaffolding and scaffolders have not been told to erect there, so god help the fans and patrons of Costa who may be injured if one falls off! 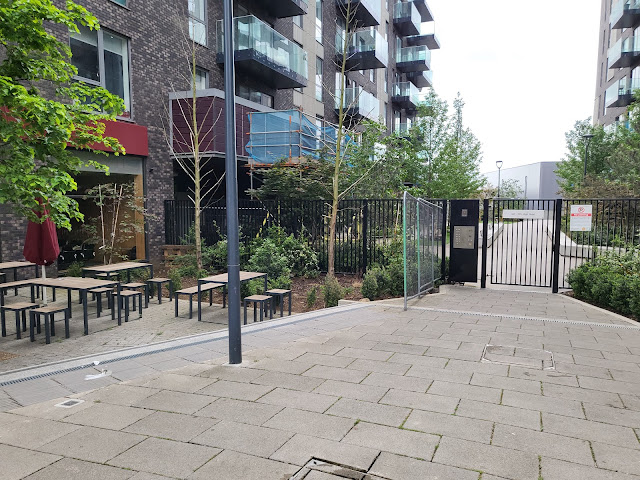 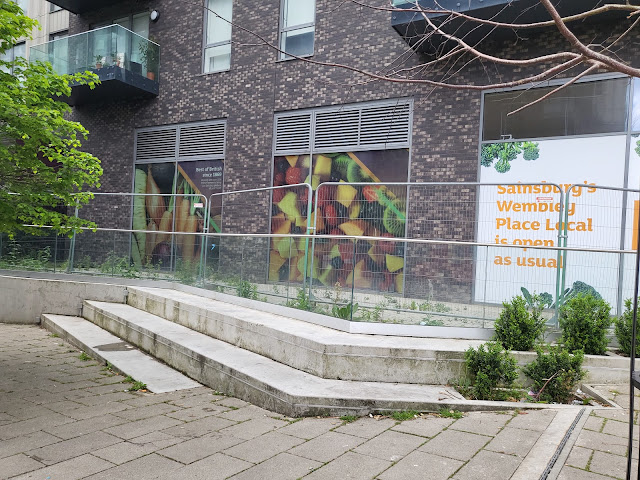 You might also observe the Heras Fencing which has been there forever, along with the security gates to enter the development. None of this was shown in the artist’s impression of the development. 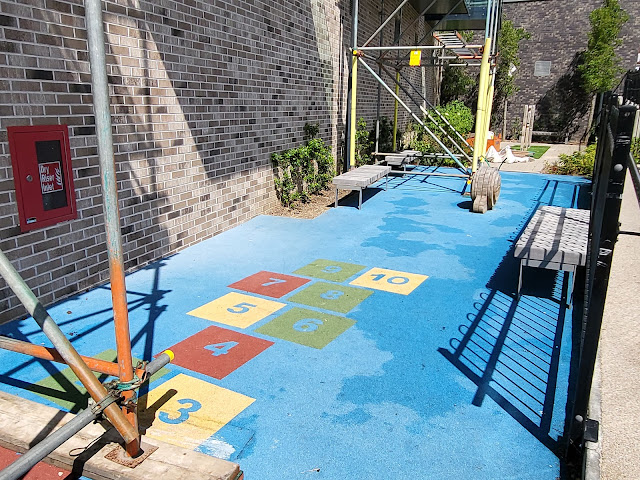 As for the play area, it is unusable for the kids as it's full of scaffolding and despite the fact it was 20% down on the recommended amenity space in the first place. Coplands Fields still remain locked off to everyone, despite being "public land". We were told it only required 10% of the space to build the new school but they have given St Josephs RC School and Elsley Primary some to expand to for forms of entry - the rest remains fenced off to the public.

I really need Carolyn Downs to answer an FOI as to why this is so.  I have ear-ached Muhammed Butt and Krupa Sheth to no avail, and cannot get a sensible answer from either of them.............something is not right.

Can't get a sensible answer from Mo Butt or Krupa Sheth - what a surprise!!!

Your article mentions the shared ownership flats above Costa Coffee. Do you know whether they are all occupied, or whether Notting Hill Genesis are still trying to find people willing to part-own them?

Given the glut of shared ownership flats that have been included in the "affordable housing" planning consents for large developments in Wembley, and the downsides of shared ownership highlighted by the cladding crisis, it would not be a surprise if some of these flats are still unoccupied.

If that is the case, it does not bode well for Brent's proposed Cecil Avenue development next door. Of the 98 "affordable" Council homes (only 39% of the total 250, with the rest to be sold privately) 61 are meant to be for shared ownership, with only 37 for rent to Council tenants, unless the Council can be persuaded (through Scrutiny?) to change their plans.

Between these car-free housing blocks looks ideal for a public linear park designed with Fire Brigade access at all times mind.


......More climate change level rainfall needs to be utilised inside Brent new development sites even for a hill top site like this one, as serious flooding detriment should be site contained rather than allowed to flow off downhill whatever.

Roof gardens, planted surround rain gardens, excess rainfall storage on site to pump remove later- all good options. The problem is cost, and venture capital being all about take the flat lease sales money, trade the block on and off to the next site.