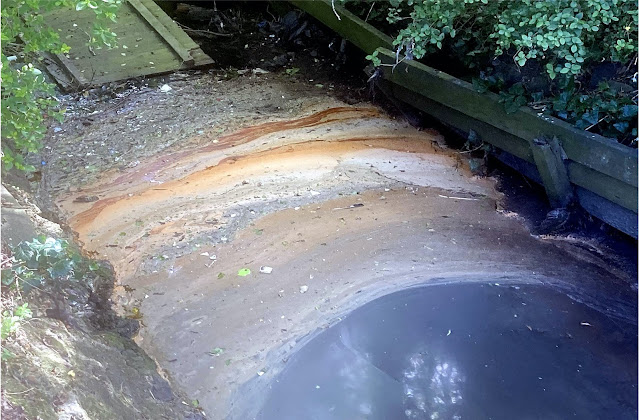 Wealdstone Brook at the height of the pollution incident

Yesterday – Wednesday 22nd June 2022 – the area around Beckton Sewage Works in NE London has been declared a ‘Major Incident’ because the Polio virus has been detected in the local river water. LINK

Raw sewage in the Woodcock Park section of the Wealdstone Brook persisted through to May.

If it turns out that water samples were also taken from the Wealdstone Brook (and they should have been given the information now released from the Environment Agency as of yesterday) then Brent Council were negligent to say the least in not declaring the human sewage pollution of the Wealdstone Brook a ‘Major Incident’ as requested by me.

If there were no medical tests of the water for such viruses, then I would regard that a major dereliction of duty from Brent and Harrow Council and the local medical authorities, particularly since we had a zoom meeting with a health official in the Brent and Harrow area regarding just this issue. The water of the Brook was not only chemically toxic and dangerous to human health – it would also certainly contain some potentially very serious viruses and was therefore biologically toxic.

How dare they play games with our health let alone the health of children who continued to play in and around this river as it runs through Woodcock Park and no action was taken by the authorities to fence off this river in spite of repeated requests on health and safety grounds from the Friends of Woodcock Park.

I am angry, very angry – ignorance is no excuse for the failure to protect the health of residents of Kenton, particularly those that live close to the Wealdstone Brook.

With Polio detected in London sewage, Dr Chris Papadopoulos, Principal Lecturer in Public Health at the University of Bedfordshire, says this incident highlights how the UK has dropped the ball when it comes combating vaccine stigma in deprived communities:

“The real danger here is steadily decreasing rates of childhood vaccination across the board (including Polio) in many communities in the UK. The statistics show that vaccine hesitancy is increasing and the problem really isn't going to solve itself.
“In the short term, to boost the public's response to the Polio situation, the government should offer financial incentives to families, especially those living in deprivation, as it is here that vaccination rates are decreasing the most. In the longer term, the growing stigma toward vaccines in childhood means we need a better public health strategy that's underpinned with the latest research, together with real political will to address the problem.”

I read yesterday that the polio found at Beckon sewage works will be Health Security Agency traced back to its precise street or block of origin, this out of a 4 million North and West London homes catchment area.

South Kilburn is a marked as having tuberculosis cases and development-led removal of health infrastructure on estates is certainly regressive London pandemic government.

Maybe ongoing Brent rivers pollution could like with polio be traced back to source?

Thanks to Friends of Woodcock Park and others who have been working on this, but it's perhaps worth adding that the problem certainly isn't confined to Woodcock Park. The area where Wealdstone Brook crosses Forty Avenue has been smelling revolting for months; it was particularly bad when I cycled over it last Wednesday (the weather had been hot), so clearly the problem has not been resolved.

Many thanks to Friends of Woodcock Park and others who have been working on this, but it's perhaps worth adding that the problem certainly isn't confined to Woodcock Park. The area where Wealdstone Brook crosses Forty Avenue has been smelling horrible for months; it was particularly bad when I cycled over it last Wednesday (the weather has been very hot), so clearly the problem has not been resolved.