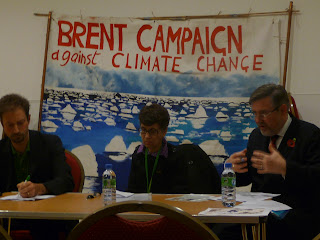 With the economic crisis wreaking havoc on people's lives  it is hard to maintain a focus on an even greater threat:  climate change.  I think the economic crisis is like the aftermath of an earthquake with everyone concentrating on getting people out of the wreckage and saving lives. Meanwhile on the horizon a huge tsunami, representing climate change, is inexorably heading towards us, and will sweep away our feeble efforts...

On Friday the Intergovernmental Panel on Climate Change published a report stating that heavier rainfall, fiercer storms and intensifying droughts will have a devastating effect in coming decades.  The Guardian reported Connie Hedegaard, Europe's climate chief, as saying, 'Last week, the serious warning from the International Energy Agency. Today this IPCC report...With all the the knowledge and rational argument in favour of urgent climate action, it is frustrating to see that some governments do not show the political will to act. In light of the even more compelling facts, the question has to be put to those governments in favour of postponing decisions: for how long can you defend your inaction?'

Bob Ward of the Grantham Research Institute at the LSE said, 'The report shows that if we do not stop the current steep rise atmospheric levels of greenhouse gases, we will see much more warming and dramatic changes in extreme weather that are likely to overwhelm any attempt human populations might make to adapt to their impacts.'

A recent meeting Food, Floods and Climate Change held at Willesden Green Library was very timely in dealing wiuth these questions.  It was addressed by Cllr. Jonathan Essex (Green Party) and Barry Gardiner MP, Ed Miliband's Special Envoy on Climate Change.  Full videos of the meeting can be seen HERE