Veolia under scrutiny on human rights

Brent councillors will shortly be receiving a letter (LINK) signed by 302 borough residents setting out the case for Veolia, the French multi-national, to be removed from the list of potential  contractors for the new 25 year, multi-million contract for the West London Waste Authority. A similar letter has been signed by residents in the other five boroughs that constitute the WLWA.


The case is based on the premise that in its activities in the illegally occupied territories:

a) Veolia has demonstrated racist practices in its recruitment policies; and
b) Veolia has been guilty of grave misconduct through its active participation in violations of international and humanitarian laws and norms

Veolia is one of the company's on the current 'long-list' from which the WLWA will be making a short-list soon.

Brent and Harrow Palestine Solidarity Campaign is holding a meeting on Tuesday November 22nd at 7pm at Willesden Green Library to discuss the issues concerned (see notice below): 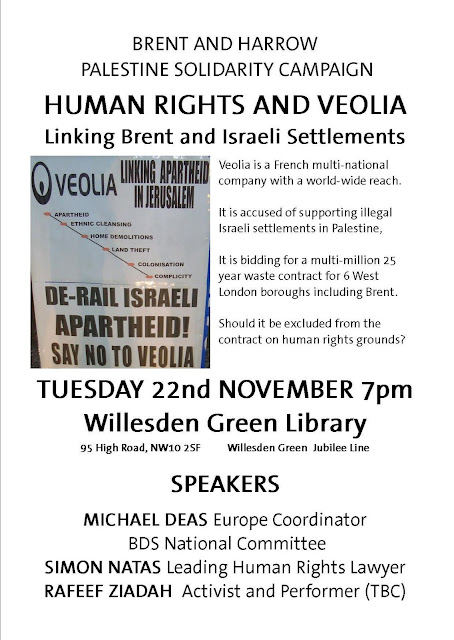