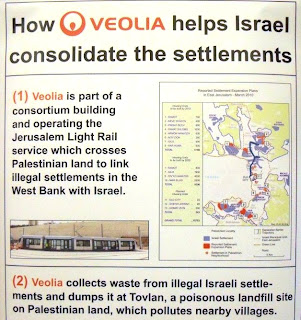 All Brent councillors have been sent a letter from Brent Palestine Solidarity Campaign and the Dump Veolia West London campaign requesting them to support the following request:


That Veolia Environmental Services be excluded from the bid and tender process for the West London Residual Waste Services because we believe there is evidence that:
a) Veolia has demonstrated racist practices in its recruitment policies; and
b) Veolia has been guilty of grave misconduct through its active participation in violations of international and humanitarian laws and norms

Veolia is on the long-list for the multi-million 25 year contract for dealing with the residual waste of Harrow, Hounslow, Hillingdon, Ealing, Richmond and Brent. 302 Brent residents have signed the letter setting out the evidence for the request based on Veolia's activities in the Occupied Palestinian Territories. The full letter is HERE

The WLWA will shortly be drawing up the short-list for the contract and campaigners hope that they will be excluded at this stage. Councillors were invited to a public meeting on Tuesday November 22nd where the  legal, moral and human rights case for Veolia's exclusion was put forward. A recording of the meeting can be viewed on the Brent Green's blog along with a report of the meeting by Shahrar Ali  HERE

Cllr James Powney is Brent's representative on the WLWA.

Yesterday evening Brent TUC (Trades Council) approved a model motion on the issue and decided to affiliate to the Palestine Solidarity Campaign.

Meanwhile Brent Council's contract with Veolia for waste management and street sweeping runs out in 2014. The procurement process will start well before then.  Recently Veolia failed to win a similar contract in Ealing.
Posted by Martin Francis at 12:07:00

How many other nationalities' companies are you going to do this for? How many countries' companies do you already boycott? What? None? What a surprise.

As you can see from this blog I have a wide range of interests so plenty of companies to boycott - including TOTAL over collusion with generals in Burma.

For your information at least a third of the platform and about a third of the audience were Jewish. However they were there because they were concerned about human rights and not religion, race, ethnicity or whatever.