HS2 vanity project a 'disgrace' at time of massive cuts 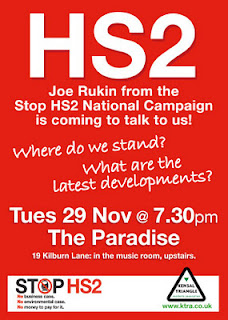 Last night's meeting sought to re-galvanise the High Speed Rail 2 campaign ahead of the decision on whether to proceed with the project which is expected to be announced by Justine Greening MP on December 20th.

Among the issues that were discussed were:
In discussion it was suggested that campaigners should not be duped into concentrating on the detail but instead focus  on what the £32bn could be spent on instead of HS2 at a time when public services are being cut and other railways need investment. A leaf should be taken from the St Paul's Occupiers and the project exposed as a ' @$*&%£#' disgrace'.

The meeting agreed that a bullet point update was requested that could then be used to write to MPs, including' off-route' ones, as well as London Assembly Members.

The Green Party passed this motion on HS2 at its Cardiff Conference:

Current proposals for a new north-south high speed rail route are based on assumptions about continuing growth in mobility, energy use and CO2 emissions which are not compatible with green party policy.

The Green Party does not support the current (2011) high speed rail proposals known as HS2 but will review this policy if and when evidence emerges that HSR is embedded within an overall policy context that can deliver reductions in the demand for transport, energy use, land take and CO2 emissions.

Huh, the UK government in all their sublime logic are going to spend £33BILLION! on 186 miles of high speed railway which will take THIRTEEN YEARS to build!

Now we all know that 13 years mean 20 years, £33billion means £50billion and all this to link only five cities with one line. Now compare this to the recently opened High Speed Railway in CHINA....

1486 miles/£94billion/FOUR years and the worst thing - their trains look awesome... ours will simply look shit, conforming to the millions of sheets of red tape to complete the overpriced project... let's have a look at that again...

- Roaring through the once peaceful English countryside and there's not even a consideration to link London with Edinburgh or Glasgow (no wonder the Scots want rid of us!)

Now I can't be bothered to work out how much more value the Chinese are building their systems for but it's a helluva lot fucking better that what David Cameron has 'promised'!

So why don't they hire the Chinese, build the tracks underground, get rid of the fucking useless red tape that means the country is losing £33billion and then spend it on the airports or give us all a nice little bonus in our pay packets...

I know I'd rather prefer £507 in my pocket rather than it being spent on a railway I'll probably never use only to save 50 minutes off a journey time!

They built railways quicker in the wild wild west!

So, Cameron - fuck off with all this 'saving the economy' bollocks, stop helping your rich friends get richer by promising them business and spread the wealth to us little people so that we don't slip back into the dark ages!