The public gallery  of Court 63 was crowded with Brent library campaigners today as the first day of the Appeal was being heard.  The Appellant's QC made it clear that the library campaigners' case was based on the process that Brent Council followed in its consultation and decision to close the libraries, rather than whether it was right to close libraries as such.

She focused particularly on the Council's failure to recognise that its own data signalled the possibility that the closure of the six libraries would indirectly discriminate against the Asian population of Brent. The figures showed that whilst Asians constituted 28% of the Brent population, they accounted for 46% of library users while the white population of 45% accounted for only 29% of users. As 3 of the six libraries that were closed served areas with higher than average  Asian population,  they were left with only Ealing Road library in the ward with the most dense Asian population. (Before the closure of the other libraries more than 60% of Ealing Road users were Asian)  So not only were people deprived of their own libraries but the remaining library at Ealing Road, as later evidence testified, had become over-crowded as a result of the closures.

The QC also drew attention to the fact that despite their high usage of libraries only 21% of responses to the consultation came from Asians. She argued that this should have alerted the Council to ask why Asians used libraries more than other groups and  why they had not been effective at getting the views of the Asian population. A double whammy. There had been no attempt by the Council to investigate if Asians would be more affected than other user groups. 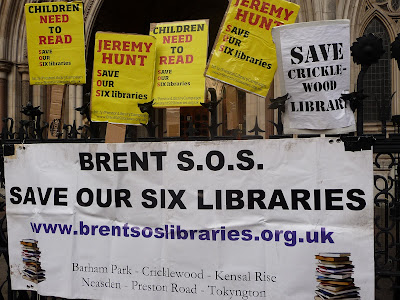 A further argument was that the Equalities Impact Assessment, as required by legislation, had been done at the last minute, and after the decisions about closure had already been made for all practical purposes. Although the EIA was very long it was premised on the Council's belief that there was 'no risk' of indirect discrimination and therefore did not analyse the data. It was a question of 'never mind the quality, feel the width'. The Appellant's submission was that the Council had an erroneous approach to the EIA and had claimed that 'only' the elderly, those with a disability and the very young,(those who could not travel or migrate to other libraries), would be affected.
Posted by Martin Francis at 18:09:00