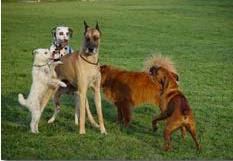 Details of the proposals on Dog Control Orders have now been published. They will be going to the Council Executive for approval on November 14th.  There has been some opposition from professional dog walkers to the restriction on the number of dogs walked to six per person, with some walkers and the people who employ them arguing there should be no restriction at all. However other respondents suggested a limit of four dogs per person.

The document notes that this is not the same as a limit on the number of dogs walked together. This means that several individuals walking together could have a combined total of more than six dogs. There is a possibility that professional dogs walkers could avoid the restriction if they got a friend or two to accompany them. Clearly this will need to be monitored but overall the restriction seems to be sensible and a way of maximising the enjoyment and safety of open spaces such as Fryent Country Park and the Welsh Harp.

There is a lovely straight-faced sentence in the consultation report:


It is not possible to consult directly with dogs that may be affected.

The Impact Needs Assessment, including details of the consultation response can be found HERE and a list of the parks and playgrounds where dogs will be required to be kept on a lead in part of the space or the whole area can be found HERE
Posted by Martin Francis at 12:26:00