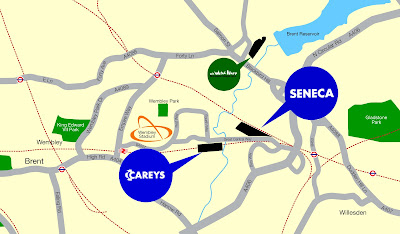 I can reveal that the stink reported over the weekend between Neasden and Wembley Park emanated from the Neasden recycling yard of Seneca. The Environment Agency has given Seneca until Friday to clear it up but there are warnings that the smell could get worse while this happens.

Seneca, a subsidiary of Careys, was given planning permission by Brent Council for a Materials Recycling Facility on the site, despite concerns about the number of waste facilities in the area. Latterly the Wembley Plan consultation mentioned the impact of 'bad neighbour' waste processing and handling firms in the area on potential redevelopment, including the possibility of a new primary school in Fulton Road.

Seneca is named after the Roman philosopher and politicam 5BC-65AD. One of his popular quotations is...


Be not too hasty either with praise or blame; speak always as though you were giving evidence before the judgement-seat of the Gods.

...so I had better be careful. However it is worth pointing out that Seneca's parent company, Careys, was much praised by ex-Brent Council leader Ann John, when they stepped in to help save the Welsh Harp Environmental Education Centre.

Next year the procurement process will start for a new Brent Waste Contract worth millions of pounds. The contract for waste collection and recycling and street cleaning is presently held by Veolia. The new contract may also include park maintenance.


The Environment Agency can only work if they get information/ complaints from local people . You can speak to them on 0800 807060.

The Brent and Kilburn Times followed up this story today and report that 'The Environment Agency issued Seneca Environmental Solutions, T. E. Scudder and P.J. Carey with the notice after it began receiving complaints about a bad smell in parts of Neasden and Wembley.'

I read the article too. Brent council need to take prompt action as commuters who passing through Neasden also noticed it. it affecting the reputation of wonderful Neasden.