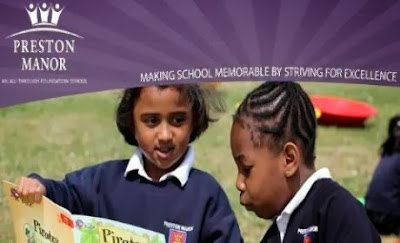 A  Settlement Agreement was reached just before Christmas on a long running battle between Preston Manor Academy Trust and Brent Council and a group of local residents led by Mr Len Gordon.

Residents had objected to the Trust and Council's application to the  Upper Chamber of the Lands Tribunal for the lifting of  Covenants that restricted the building of primary school classrooms on the Preston Manor site.

Residents were opposed to further expansion of the site on grounds of noise and light nuisance as well as increased traffic but the school and Brent Council went ahead even after the Covenants has been drawn to their attention.

Richard Barrett, Operational Director for Brent's Regeneration and Growth Department explained in his witness statement that, after a risk assessment, the Council decided to go ahead with the building work because they might otherwise have had £7m of government funding clawed back. They thought that it was unlikely that the Covenants would be upheld by the Upper Tribunal and were conscious of the need to provide more primary places.

However in his statement Barrett also stated:


I have to accept that the late discovery of these Covenants indicates that officers within the Children and Families Directorate did not undertake due diligence by carrying out title checks. In simple terms, it seems to me that they failed to appreciate that the land was not owned by the Council, but (because the school had Foundation status) was in fact owned freehold by the school. A full title search was undertaken by the Council's Regeneration and Major Projects (Property Unit) (who had by them taken over the project), in December 2010/January 2011 and this led us to discover the restrictions in the titles which permitted development but not of accommodation for a school.

The Settlement Agreement provides for the Objectors withdrawing their objections to the Applicaton by the Trust and Council for modified wording to the Covenants.

The Objectors will share a payment of £303,000 made to Brent Council by the Trusti n a full and final settlement of their entitlement and claims for compensation and any 'loss and damage howsoever arising out of the construcxtion of the primary schools and the temporary classrooms and their subsequent uses, and the other uses of the Land made by the Governing Body and the Trust...'

The Settlement Agreement includes publication of the schools' letting policy on its website alongside emergency contact numbers, highlighted conditions for people hiring the facilities to have regard to households neighbouring the school, the school's attendandance at local safer neighbourhood meetings, and facilities for the public to attend Governing Body meetings.

The Trust will update its Travel Plan and submit it to the Council's travel plan officer. The Transportation Unit will review traffic and parking problems in the area and meet with local residents on ameliorative measures.

The Covenants will be amended to allow current existing permitted educational uses with an entitilement to make 'minor changes and ancillary changes to the existing buioldings and grounds.' The Objectors waive all claims arisng out of the existing temporary classrooms on the site 'up to the end of January 2015'.

This has clearly been an expensive and time consuming process. On December 13th (before the Settlement Agreement was made) I put the following FoI request to Brent Council:

Says it all, really. Richard Barrett,(the responsible Brent Council Director), tells us that 'they', (the responsible Brent Council Directorate), 'failed to appreciate that the land was not owned by the Council, but (because the school had Foundation status) was in fact owned freehold by the school'. Seems to me a quite important thing to not know really. And a case not just of the left hand not knowing what the right hand was doing but not knowing what it was doing itself.
How much confidence should we now have in Brent Council and Ark Academy's assurances regarding the huge and desirable bit of real estate that Copland sits on? Do Mr Barrett or Mr Pavey know who owns that? Do they know who will own it after Ark take over?
Were they clear about who owned it when Davies and I.P.Patel seemed quite interested in its future?
Doesn't fill you with confidence really, does it?

Who ultimately has benefited from this legal action, apart from lawyers? The gains by the objectors seem to be superficial, though I don't know the split between them (nor how that portion will be divided between the objectors, nor their reasons for getting money save as nimbyists) and Brent Council of the £303,000 to be paid by Preston Manor School (nor wherefrom the latter will get the funds to pay this amount).

All very good questions Dan. The last is particularly important as the oversight regarding the Covenants seems to be the responsibility of Brent officers and at the time the school had foundation status, rather than the academy trust status it now has. I hope my FoI request will clear that up but perhaps you could ask your party colleagues about it.

You will know that there are similar (and larger) expansion plans at Wembley High School which will see an 840 place primary school on the site. This also has encountered opposition from some residents on traffic grounds. I don't know of any Covenants there and presumably the Council has undertaken due diligence. However there may be issues over loss of playing fields.